Erhard Turek (born November 6, 1942) was a Canadian football player for the Edmonton Eskimos and Hamilton Tiger-Cats. He won the Grey Cup with them in 1967. [1] He previously played football at Waterloo Lutheran University in Waterloo, Ontario. [2]

Concordia may refer to:

The Pennsylvania Dutch (Pennsilfaanisch-Deitsch), also referred to as the Pennsylvania Germans, are a cultural group formed through those who emigrated primarily from the territory in Europe now partly within modern-day Germany, but also from the Netherlands, Switzerland and today France (Alsace-Lorraine) travelling down the river Rhine to the sea ports. The word Deitsch corresponds with the High German word Deutsch, meaning "German", and is how the first settlers would have described themselves in the principal southern German dialect spoken: Palatine German. Most of these settlers emigrated in the 17th and 18th centuries to America and spoke unique dialects within the German language family, but it is through their cross-dialogue interaction and what was retained by subsequent generations that a hybrid dialect emerged, known as Pennsylvania German or Pennsylvania Dutch, which has resonance to this day.

Elmira is the largest community within the Township of Woolwich, which used to be in Waterloo County, Ontario but is now in the Regional Municipality of Waterloo. It is 15 kilometres (9 mi) to the north of the city of Waterloo. The community was listed in the Canada 2016 Census with a population of 10,161 at that time. 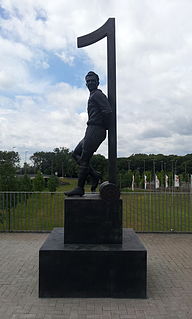 German Canadians are Canadian citizens of German ancestry or Germans who emigrated to and reside in Canada. According to the 2016 census, there are 3,322,405 Canadians with full or partial German ancestry. Some immigrants came from what is today Germany, while larger numbers came from German settlements in Eastern Europe and Imperial Russia; others came from parts of the German Confederation, Austria-Hungary and Switzerland.

Libice nad Cidlinou is a municipality and village in the Central Bohemian Region of the Czech Republic. It has about 1,300 inhabitants. It is one of the oldest settlements in Bohemia. Libice nad Cidlinou is located 5 km southeast of Poděbrady at the confluence of the Cidlina and Elbe rivers.

Wilfrid Laurier University is a public university in Waterloo, Ontario, Canada. The university also operates satellite campuses in Brantford and Milton, Ontario, as well as offices in Kitchener, Toronto, Yellowknife, and Chongqing, China. It is named in honour of Sir Wilfrid Laurier, the seventh Prime Minister of Canada. The university offers undergraduate and graduate programs in a variety of fields, with over 15,000 full-time undergraduate students, over 1000 full‑time grad students and nearly 4,000 part-time students as of Fall 2019. Laurier's varsity teams, known as the Wilfrid Laurier Golden Hawks, compete in the West Conference of the Ontario University Athletics, affiliated to the U Sports.

David "Tuffy" Knight is a former coach of Canadian university football and a member of the Canadian Football Hall of Fame.

William John Villaume was an American Lutheran minister and the first president of Waterloo Lutheran University. He held the position from 1960 to 1966.

The 1972 CFL Draft composed of nine rounds where 70 Canadian football players that were chosen exclusively from eligible Canadian universities. The Montreal Alouettes, who had the worst record in the Eastern Conference in the previous season, had the first overall selection.

The 1973 CFL Draft composed of nine rounds where 93 Canadian football players were chosen from eligible Canadian universities and, for the first time, Canadian players playing in the NCAA. Prior to 1973, teams were given exclusive signing privileges to Canadian players who attended U.S. schools based on the territory he was domiciled. After the draft was expanded to include NCAA schools, teams were also permitted to exempt from the draft and select players from their area, regardless of where they attended school.

The 2nd Vanier Cup was played on November 19, 1966, at Varsity Stadium in Toronto, Ontario, and decided Canada's university football champions by way of a national invitation to participate in the game. The St. Francis Xavier X-Men and the Waterloo Lutheran Golden Hawks were invited by a national panel to compete in a single elimination game to decide the Canadian college football champion for the 1966 season. The X-Men won their first ever championship by defeating the Golden Hawks by a score of 40-14.

Jason Johnson is a former American football quarterback who played three seasons with the Edmonton Eskimos of the Canadian Football League (CFL). He played college football at the University of Arizona and attended Rogers High School in Puyallup, Washington. While at Arizona, he would break many school records including most passing yards in a game. He won the 2001 Woody Hayes Award as the top male scholar-athlete in Division I sports. He was a member of the Edmonton Eskimos team that won the 93rd Grey Cup. Johnson served as quarterbacks coach of the Pacific Lutheran Lutes from 2010 to 2011. He also played for the Swarco Raiders of the Austrian Football League in 2009, helping them Euro Bowl XXIII. He played for the Catania Elephants of the Italian Football League in 2008.

John Kruspe is a retired Canadian football player who played for the Montreal Alouettes, Ottawa Rough Riders and Hamilton Tiger-Cats. He previously played football at Waterloo Lutheran. Laurier has inducted him into their Sports Hall of Fame twice, once in 1986 and then again in 2011. John was a member of the Ottawa Rough Riders team that beat out the Edmonton Eskimos during the 1973 Grey Cup Championship in Toronto at Exhibition Stadium. He returned to Ottawa from Hamilton with his wife Bonny Kruspe (Reading) and their son Jory upon retirement from the game. He would soon become a school Principal with the Ottawa Board of Education and have a second son Tyler.