Two general varieties of fat-tails exist, the broad fat-tails and the long fat-tails. The majority of fat-tailed sheep breeds have broad fat-tails, where the fat is accumulated in baggy deposits in the hind parts of a sheep on both sides of its tail and on the first 3–5 vertebrae of the tail. [4] [5] In the long-tailed sheep the fat is accumulated in the tail itself, which may grow so large that it drags on the ground and hinders copulation. [4]

The earliest record of fat-tailed sheep is found in ancient Uruk (3000 BC) and Ur (2400 BC) on stone vessels and mosaics. Another early reference is found in the Bible (Exodus 29:22 and Leviticus 3:9), where a sacrificial offering is described which includes the tail fat (called Alya, Hebrew: אַלְיָה) of sheep.

Sheep were specifically bred for the unique quality of the fat stored in the tail area and the fat (called Elyah, Arabic: [6] ألية ) was used extensively in medieval Arab and Persian cookery. The tail fat is still used in modern cookery, though there has been a reported decline, with other types of fat and oils having increased in popularity.

Fat-tailed sheep are hardy and adaptable, able to withstand the tough challenges of desert life. When feed is plentiful and parasites not a major factor, fat-tailed sheep can be large in size and growth. The carcass quality of these sheep is quite good, with most of the fat concentrated in the tail area - it could account for as much as 10 pounds (4.5 kilograms) of the weight on a 60 pound (27 kilogram) carcass.[ citation needed ] The fat-tailed breeds seen frequently in the US are the Karakul and Tunis.

The wool from fat-tailed breeds is usually coarse and frequently has colored fibers. It would be of limited value in commercial markets. Today it is used primarily for rug-making and other cottage-type industries. Bedouin women make rugs and blankets from the wool. Some of their handiwork can be purchased in the villages of Egypt. Shearing in Egypt is done once or twice a year with hand clippers. There is a reluctance to use electric shears because of wool quality and the difficulty in getting replacement parts when they become dull or worn out. 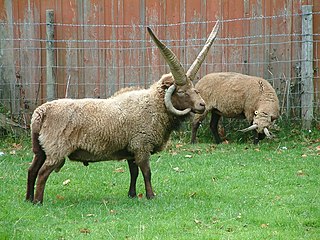 The Manx Loaghtan ( loch-tan) is a rare breed of sheep native to the Isle of Man. It is sometimes spelled as Loaghtyn or Loghtan. The sheep have dark brown wool and usually four or occasionally six horns.

The Soay sheep is a breed of domestic sheep descended from a population of feral sheep on the 100-hectare (250-acre) island of Soay in the St Kilda Archipelago, about 65 kilometres (40 mi) from the Western Isles of Scotland. It is one of the Northern European short-tailed sheep breeds. 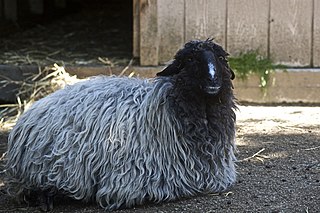 Karakul or Qaraqul is a breed of domestic sheep which originated in Central Asia. Some archaeological evidence points to Karakul sheep being raised there continuously since 1400 BC.

Kofta is a family of meatball or meatloaf dishes found in the Indian subcontinent, South Caucasian, Middle Eastern, Balkan, and Central Asian cuisines. In the simplest form, koftas consist of balls of minced or ground meat—usually beef, chicken, lamb, or pork—mixed with spices and/or onions. In the Indian subcontinent and the Middle East, koftas are usually made from lamb, beef, mutton or chicken, whereas Greek, Cypriot, and Balkan versions may use pork, beef, lamb, or a mixture of the three. In Greece and Cyprus there are also vegetarian versions known as hortokeftedes, often eaten during fasting periods such as Lent. An uncooked version is also made in Turkey, called Çiğ köfte. In India, vegetarian varieties include koftas made from potato, calabash, paneer, or banana. In Europe, kofta is often served in a fast-food sandwich in kebab shops.

The Spælsau is a breed of sheep from Norway. Many consider Spælsau to be the original breed of sheep in Norway, and it is one of the Northern European short-tailed sheep breeds. It is well adapted to the climate and was a domestic animal from the Iron Age. The spælsau stock is about 22% of the sheep in Norway.

The Suffolk is a British breed of domestic sheep. It originated in the late eighteenth century in the area of Bury St. Edmunds in Suffolk, as a result of cross-breeding when Norfolk Horn ewes were put to improved Southdown rams. It is a polled, black-faced breed, and is raised primarily for its meat. It has been exported to many countries, and is among the most numerous breeds of sheep worldwide.

The Hebridean is a breed of small black sheep from Scotland, similar to other members of the Northern European short-tailed sheep group, having a short, triangular tail. They often have two pairs of horns. They were often formerly known as "St Kilda" sheep, although unlike Soay and Boreray sheep they are probably not in fact from the St Kilda archipelago. 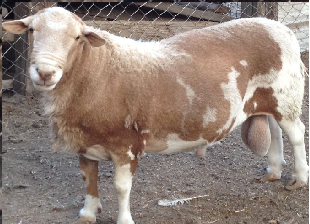 The Katahdin is a breed of domestic sheep developed in Maine, United States and named after Mount Katahdin - the state’s highest peak. The breed was developed during the second half of the 20th century by crossing selected St. Croix sheep from the Virgin Islands with various other breeds, including the Suffolk. Lambs were selected based on hair coat, meat-type conformation, high fertility, and flocking instinct.

Afghan cuisine is largely based upon the nation's chief crops, such as wheat, maize, barley and rice. Accompanying these staples are native fruits and vegetables as well as dairy products such as milk, yogurt doogh and whey. Kabuli palaw is the national dish of Afghanistan. The nation's culinary specialties reflect its ethnic and geographic diversity. Afghanistan is known for its high-quality pomegranates, grapes, and sweet, rugby-football shaped melons. 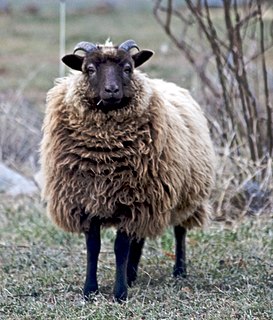 The Shetland is a small, wool-producing breed of sheep originating in the Shetland Isles, Scotland but is now also kept in many other parts of the world. It is part of the Northern European short-tailed sheep group, and it is closely related to the extinct Scottish Dunface. Shetlands are classified as a landrace or "unimproved" breed. This breed is kept for its very fine wool, for meat, and for conservation grazing.

Welsh Mountain sheep are small, hardy sheep from the higher parts of the Welsh mountains. The males have horns, and the females are polled (hornless); they have no wool on the face or legs, and they have long tails. There are a number of varieties, bred for sheep farming in Wales. These are mainly colour variations, but some are being developed as separate breeds.

The Blackhead Persian is a fat-tailed breed of domestic sheep from Africa.The sheep is originally from Somalia and a direct descendant of the Somali sheep. The breed is also a type of hair sheep, meaning they do not grow wool and tolerate heat better than wooled breeds and are raised primarily for meat. The Blackhead Persian has a white body and, as their name would suggest, an entirely black head.

Sheep are quadrupedal, ruminant mammals typically kept as livestock. Like most ruminants, sheep are members of the order Artiodactyla, the even-toed ungulates. Although the name sheep applies to many species in the genus Ovis, in everyday usage it almost always refers to Ovis aries. Numbering a little over one billion, domestic sheep are also the most numerous species of sheep. An adult female is referred to as a ewe, an intact male as a ram, occasionally a tup, a castrated male as a wether, and a young sheep is a lamb.

The Boreray, also known as the Boreray Blackface or Hebridean Blackface, is a breed of sheep originating on the St Kilda archipelago off the west coast of Scotland and surviving as a feral animal on one of the islands, Boreray. The breed was once reared for meat and wool, but is now used mainly for conservation grazing. The Boreray is one of the Northern European short-tailed sheep group of breeds.

The Meatmaster is a breed of domestic sheep native to South Africa. Bred in the early 1990s from various hair sheep breeds, the Meatmaster was created with the goal of improving the meat characteristics of African fat-tailed sheep breeds. The fat-tailed sheep had various advantageous characteristics such as hardiness and suitability for desert life, but was slow to mature, had a poor distribution of fat and lacked the muscling of the hind quarters of European breeds. The composite breed increased the amount of muscle and had a better distribution of fat but retained the hair coat and other desirable traits such as resistance to tick-borne diseases and a good flocking instinct. 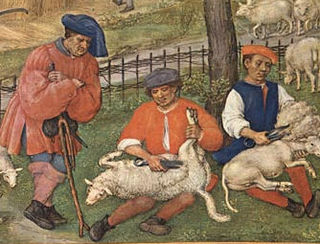 The history of the domesticated sheep goes back to between 11000 and 9000 BCE, and the domestication of the wild mouflon in ancient Mesopotamia. Sheep are among the first animals to have been domesticated by humans, and there is evidence of sheep farming in Iranian statuary dating to that time period. These sheep were primarily raised for meat, milk, and skins. Woolly sheep began to be developed around 6000 BCE in Iran, and cultures such as the Persians relied on sheep's wool for trading. They were then imported to Africa and Europe via trading.

Tail fat is the fat of some breeds of sheep, especially of fat-tailed sheep. It is fat accumulated in baggy deposits in the hind parts of a sheep on both sides of its tail and on the first 3–5 vertebrae of the tail. The weight of this part of a sheep's anatomy may be up to 30 kg (66 lb). These hind parts are used to accumulate fat for subsequent use during dry seasons, similar to a camel's humps.

The Pinzirita or Pinzunita is a breed of domestic sheep indigenous to the Mediterranean island of Sicily, Italy. Its name derives from pinzuni, the Sicilian language name for the chaffinch, Fringilla coelebs, which it is thought to resemble in colouring. It is also known as the Siciliana comune, or "common Sicilian sheep". It is distributed throughout most of Sicily, except for the southern coast, where the Comisana is preferred, and the hills of the provinces of Agrigento, Caltanissetta and the southern part of the province of Palermo, where the Barbaresca is predominant. Like the Leccese and Altamurana, it belongs to the Zackel sheep group. It is a hardy and frugal breed, well adapted to survival on poor mountain pasture and in the macchia mediterranea biome of inland Sicily.

Edilbay sheep, also known as Edilbaev(skaya) sheep, are a breed of domesticated sheep which originated in northern Kazakhstan. This breed belongs to the coarse-wooled fat-tailed type of sheep and the Kazakh group. It originated in the 19th century as a cross between Kazakh fat-tailed sheep and Kalmyk/Astrakhan coarse-wooled sheep. Today, it is found in Kazakhstan and Russia. 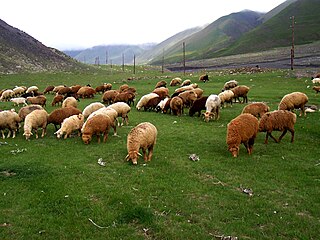 Sheep farming in Azerbaijan is directed to the production of meat, fiber (wool) and dairy products. It is considered as an old animal husbandry branch and usual for around the country. Production in variety fields such as wool, meat and dairy products makes sheep farming leading animal husbandry field in the country. There are few pasture areas in Azerbaijan and it shows negative impact on the productivity of the sheep breeding.