The Friendship Trophy is a football match, contested on an irregular basis by just two teams: Norwich City and Sunderland. [1] The match dates back to the camaraderie forged between fans of the two clubs at the time of the 1985 Football League Cup Final that they contested. Norwich City won the 1985 Football League Cup Final, however at the end of the First Division Season, both teams were relegated to the Second Division. [2]

Mackem and Canary mingled and drank happily together. “The Sunderland supporters were magnificent and everyone seemed to mix, it was light-hearted and very nice,” judged Norwich manager Ken Brown after his team had lifted the trophy thanks to a Gordon Chisholm own goal. On the London Underground, Norwich fans sang “we won the cup”, while Sunderland’s retorted with: “we scored the goal”. [3]

Nowadays, the Friendship Trophy is awarded to the winning team in competitive matches between the two sides, and as such, Sunderland are the current holders of the trophy, having beaten Norwich 3–1 at Carrow Road on 13 August 2017 in the EFL Championship. [4] This trophy is only infrequently contested, as it requires both Norwich City and Sunderland to be in the same division, or to be drawn together in a cup competition, which last happened in 2009, when Sunderland beat Norwich City 4–1 in the Football League Cup. [5] The most significant cup meeting after the 1985 final was the semi-final of the 1991–92 FA Cup at Hillsborough, which Sunderland won 1–0. [6] [7]

In 2013, Talksport named The Friendship Trophy one of football's most pointless awards. [8]

Norwich City Football Club is an English professional football club based in Norwich, Norfolk, that competes in the Championship, the second division of English football. The club was founded in 1902. Since 1935, Norwich have played their home games at Carrow Road and have a long-standing and fierce rivalry with East Anglian rivals Ipswich Town, with whom they have contested the East Anglian derby 134 times since 1902. The fans' song "On the Ball, City" is the oldest football chant in the world, written in 1890 and still sung today.

The Football League Super Cup was a one-off football club competition held in England in the 1985–86 season. It was organised by the Football League and was intended as a form of financial and sporting compensation for the English clubs which had qualified for European competition in the previous season but had been banned from entering European tournaments by UEFA following the Heysel Stadium disaster. With the ban set to last into the foreseeable future, England's clubs stood to lose a great deal of revenue, and would also have fewer opportunities to win silverware, so the Super Cup was established in order to hopefully offset at least some of this lost income, as well as offering additional competition for them. 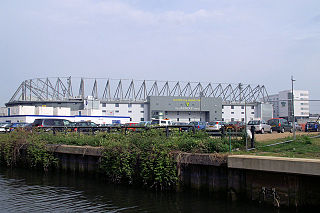 Carrow Road is an association football stadium located in Norwich, Norfolk, England, and is the home of Norwich City Football Club. The stadium is located toward the east of the city, near Norwich railway station and the River Wensum.

Robert William Fleck is a former Scottish professional footballer and manager. Fleck played as a striker from 1983 until 2001, notably in the Scottish Premier League for Rangers, in England for Chelsea in the FA Premier League, and for Norwich City in the Football League.

Kenneth Brown is an English former football player and manager. As player, he made more than 400 appearances in the Football League representing West Ham United, where he spent the majority of his career, and Torquay United, and was capped once for the England national team. As manager, he took charge of Norwich City, Shrewsbury Town and Plymouth Argyle.

Andrew John Marshall is an English retired footballer. He was a goalkeeping coach at former club Aston Villa and was briefly their caretaker manager alongside Scott Marshall in 2015. He has previously played for the England Under-21s, Norwich City, Bournemouth, Gillingham, Ipswich Town, Millwall, Coventry City and Aston Villa.

Ian Brett Culverhouse is an English former professional footballer and current first-team manager at King's Lynn Town. He was a defender who played in the position of right-back.

Mark Rosslyn Bowen is a Welsh football coach and former footballer. He is the current manager of Championship club Reading.

Duncan Scott Forbes was a Scottish professional footballer. He spent 33 years at Norwich City, 13 as a player, seven on the commercial staff and 13 as chief scout. The Times noted his aggressive defending by writing "Forbes got his customary booking; the referee ought to take his name in the changing room rather than on the pitch thus saving time."

The East Anglian derby is a sobriquet used to describe football matches held between Norwich City and Ipswich Town, the only fully professional football clubs in the neighbouring East Anglian counties of Norfolk and Suffolk, respectively. In recent years it has sometimes been humorously called the Old Farm derby, a reference to the Old Firm derby played between Celtic and Rangers, and the prominence of agriculture in East Anglia. The derby has been described as the second-fiercest rivalry in England.

The history of Norwich City F.C. stretches back to 1902. After a brief period in amateur football, Norwich City F.C. spent 15 years as a semi-professional team in the Southern League before admission to English Football League in 1920. For most of the next 50 years, Norwich City F.C. played in Division Three (South), then the joint lowest tier of the football league, a period that was distinguished by "a thrilling giant-killing sequence which took them to the FA Cup semi-finals" in 1959. Shortly afterwards, the club won its first major trophy, the 1962 League Cup. Norwich finally reached the pinnacle of the league structure in 1972, with their first promotion to the top tier.

The 1962 Football League Cup Final was won by Norwich City, who defeated Rochdale 4–0 on aggregate over two legs. The first leg, played on 26 April 1962 at Rochdale's ground, Spotland, was won by Norwich 3–0. They then won the second leg 1–0 a week later on 1 May 1962, at their own ground, Carrow Road. This was Norwich City's first major trophy. Rochdale remained for a long time the only club from the lowest division – Division 4, which was the equivalent of the current League 2 – in English league football to reach the League Cup Final, until the feat was repeated by Bradford City in 2013, after their aggregate 4–3 win over Aston Villa.

The 1985 Football League Cup Final was won by Norwich City. The Canaries defeated Sunderland 1–0 at Wembley Stadium on 24 March 1985 with an own goal scored by Gordon Chisholm, who deflected Asa Hartford's shot past goalkeeper Chris Turner. Later in the second half, Clive Walker missed a penalty awarded for a handball by Norwich defender Dennis van Wijk.