Sunderland A.F.C, originally called Sunderland District Teachers Association Football Club, rented the Blue House Field on their formation in 1879 as it was in close proximity to the Hendon Board School where founder James Allan taught. [1] They used it to train until they hosted their very first game on 13 November 1880. [2] They had dropped the 'District Teachers' part of the name before playing a single game, having struggled to find enough teachers to field a team. The first game was a friendly against Ferryhill, which the visitors won 1 - 0. A few weeks later on Blue House Field, Sunderland won their first game; a 4 - 0 victory over Ovingham. [3] [4]

The following season, Blue House Field hosted a handful of friendlies, but no competitive games, as Sunderland had been eliminated from the challenge cup while playing away to Sedgefield. The annual rent of £10 was proving onerous for the fledgling club, so it moved away from Blue House Field to find a cheaper home. [2]

In 1888, following a dispute over the direction of the club, Sunderland Albion F.C. were formed as a rival to Sunderland A.F.C. Although they played their first game at Newcastle Road, Albion came to find Blue House Field their home. [5] Blue House Field lacked stands and fencing, meaning that spectators could watch games for free. This was in contrast to their older neighbours, who had moved into Newcastle Road and were charging spectators an entry fee. Undeterred, Albion, which contained a number of players poached from Sunderland A.F.C, quickly grew in stature, winning the Durham Challenge Cup in 1889 (holders Sunderland had chosen to withdraw from a game against Albion rather than allow them to take the gate receipts).

Both clubs applied for membership to the Football League in 1889, but neither was accepted. Albion decided to become founder members of the Football Alliance instead. Blue House Field therefore hosted the first competitive league football in Sunderland, as Albion hosted 12 matches in the 1889-90 Football Alliance against teams including Nottingham Forest F.C. (won 4 - 0), Small Heath (later to become Birmingham City F.C.) (won 6 - 1), Newton Heath (later to become Manchester United F.C.) (won 4 - 0), and the eventual champions Sheffield Wednesday F.C. (lost 3 - 2). The relative success of the club led to Blue House Field being expanded, with a cycle track and a grandstand added. [1]

Albion's application to join the Football League was again rejected, while Sunderland A.F.C (who had spent the 1889-90 season playing friendly matches) were accepted into the league. League membership brought with it both national prestige and local crowds, which dealt a huge blow to Albion's long-term ambitions of becoming the town's main team. Now over-shadowed by their neighbours, they decided to play in two leagues simultaneously; the Football Alliance and the Northern Football League. In the 1890–91 Football Alliance they finished a narrow second to Stoke City F.C. who had been ejected from the Football League at Sunderland's expense. They remained unbeaten at Blue House Field that season and recorded an impressive 11 - 1 victory over Walsall F.C.

Despite impressive performances, Albion's league application was once again rejected, with a solitary vote being cast in their favour. Facing financial difficulty, Albion elected not to play in the Alliance (with its relatively long-distance travel), instead choosing to focus on the more local Northern Football League. They finished sixth in the 1891-92 season.

in April 1892, Blue House Field once again hosted Sunderland A.F.C - eleven years after the club moved away. Albion welcomed their Football League rivals for a friendly match, the fourth and final meeting between the clubs, and the first not to be played at Newcastle Road. It did not end well for the hosts, with Sunderland, who were just about to be crowned English Champions for the first time, running out 8 - 0 winners in front of an estimated crowd of 2,000. [6] [4]

With the financial troubles mounting, Albion folded in the summer of 1892, [5] and Blue House Field no longer played host to professional football, though to this day it still plays host to amateur and junior teams.

Ryton & Crawcrook Albion Football Club is a semi-professional English non-league football club from Crawcrook, near Ryton, Newcastle upon Tyne, in Tyne and Wear, currently playing in the Northern League Division Two. The team, nicknamed "Albion" or the "RACA", play their home games at Kingsley Park. They were known as Ryton F.C. until 2011. 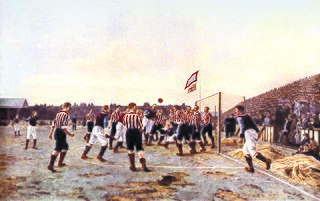 Newcastle Road was a football ground in the Monkwearmouth area of Sunderland, England, and was the home ground of Sunderland A.F.C for twelve years, between 1886 and 1898. It was the sixth ground at which the club had played. Also called Ashville Ground, it was located between Newcastle Road, Eglinton Street North and Crozier Street. Sunderland AFC's first game at the ground was a friendly against Birtley on 10 April 1886. The game ended as a 3 – 3 draw. On 5 May 1888, the now-defunct Sunderland Albion F.C. played their inaugural game at Newcastle Road; a 3 – 0 victory over Shankhouse Blackwatch, although Albion would go on to play their home games at Sunderland AFCs previous ground of Blue House Field.

James Allan was a Scottish schoolmaster, football administrator and footballer. He was the founder of Sunderland A.F.C., whom he also played for as a forward. He also founded Sunderland Albion F.C. and taught in several Sunderland based schools.

David Lalty Willis was an English professional footballer who played as a wing half in the Football League for Newcastle United and Sunderland.

Joseph Henry Butler was an English professional football goalkeeper who made 457 appearances in the Football League for Stockport County, Clapton Orient, Glossop, Sunderland and Lincoln City. With Sunderland, he won the 1912–13 First Division title and played on the losing side in the 1913 FA Cup Final.

The 1889–90 season was the ninth season of competitive association football played by Small Heath F.C., an English football club based in the Small Heath district of Birmingham. They competed in the inaugural season of the Football Alliance. They finished in tenth position in the twelve-team league with six wins, five draws and eleven defeats, which gave them seventeen points. The team scored 44 goals in Alliance competition but conceded 67.

Jarrow Football Club is a football club based in Jarrow, Tyne and Wear, England. They are currently members of the Northern League Division Two.

Abbs Field was a football ground located in the Fulwell area of Sunderland. It was the home of Sunderland A.F.C. between 1884 and 1886, the fifth ground to host the club. Sunderland played their first game at Abbs Field on 27 September 1884, winning a friendly 2 - 1 against Birtley.

Horatio Street was a football ground in the Roker area of Sunderland. It was the fourth home of Sunderland A.F.C., hosting the club between 1883 and 1884.

The 1890–91 season was Sunderland's 11th season in existence, and their first season as a Football League club. Sunderland were elected into the league for the beginning of its third season, in place of Stoke City who had finished bottom in 1889–90.

The 2019–20 season is Burton Albion's 70th season in their history and their third in League One. Along with competing in the League One, the club will also participate in the FA Cup, League Cup and League Trophy. The season covers the period from 1 July 2019 to 30 June 2020.