GAC Hino is a joint venture between Hino and GAC aimed at producing Hino-based trucks and headquartered in Guangzhou,China,where it has its single assembly facility.

The venture emerged from the merging of two previous Chinese automotive companies:Yangcheng Auto and Shenfei Hino.

In 1978,Hino established a partnership with the Chinese car manufacturer FAW by providing technical assistance on medium trucks to it,mostly for improving FAW's Soviet era Jiefanghao range. The first direct involvement in China from Hino was in 2003,when they set up an engine plant in Shanghai. [3]

In 1980,the state-owned enterprise Shenfei Group established a bus manufacturing company at Shenyang named as Shenyang Shenfei Automotive [4] (organised as a limited company in December 1993). [5] In December 2002,Shenfei,Hino,and Toyota Tsusho agreed to re-incorporate the company as a joint venture,Shenyang Shenfei Hino Automotive Manufacturing Co.,Ltd. (Shenfei Hino),focused on producing Hino buses. At the end of 2003,the joint venture completed a new bus assembly facility. [4]

In 1958,the Guangzhou municipal government established the Guangzhou Yangcheng Automotive Plant, [6] later renamed as Yangcheng Auto Company as it became a joint venture between GAC and Hong Kong Zhonglong Investment Company. [7] It built Isuzu-based light trucks and other commercial vehicles. [8]

Both Yangcheng Auto and Shenfei Hino had low sales. [8] In December 2007,GAC and Hino formed the GAC Hino joint venture (an equally-owned venture) by absorbing and reorganising Yangcheng and Shenfei Hino. [9] Both bases (Shenyang and Guangzhou) were kept by GAC Hino until a new facility for producing trucks (the Conghua plant) were completed in Guangzhou. GAC Hino also kept on managing the Yangcheng lineup. [10] In 2008,GAC announced it planned to put Yangcheng production under the GAC marque.

In the period between 2009 and 2011,GAC Hino products were only available in Guangdong and the company could keep a production volume of over 1,000 vehicles because the 700 truck was designated for building infrastructure of the 2009 East Asian Games. [3]

The Guangzhou's Conghua plant is the only production base of GAC Hino and has two assembly lines for heavy trucks with a maximum capacity of 20,000 units per year. It produces approximately 5,000 units per year on average. The plant uses the same multi-skilled work system as the Hino's Hamura plant in Japan. [3]

Huachen Automotive Group Holdings Co. Ltd.,known for its brand name Brilliance Auto Group,is a Chinese automobile manufacturer headquartered in Shenyang. Its products include automobiles,microvans,and automotive components. Its principal activity is the design,development,manufacture and sale of passenger cars sold under the Brilliance brand.

Dongfeng Motor Company Limited,most commonly known in English-language sources as Dongfeng Nissan,is an automobile manufacturing company headquartered in Wuhan,China. It is a 50–50 joint-venture between Dongfeng Motor Group and Nissan Motors. It produces passenger cars under the Nissan marque and commercial vehicles under the Dongfeng marque.

Chang'an Automobile (Group) Co.,Ltd. is a Chinese state-owned automobile manufacturer headquartered in Chongqing,China. Its principal activity is the production of passenger cars,microvans,commercial vans and light trucks.

GAC Changfeng Motor Co Ltd is a Chinese automobile manufacturer wholly owned by GAC Group but which originated as a branch of the People's Liberation Army. Changfeng produced mainly light trucks,and as of 2008 the majority of their sales had been to the Chinese state.

The automotive industry in China has been the largest in the world measured by automobile unit production since 2008. Since 2009,annual production of automobiles in China exceeds both that of the European Union and that of the United States and Japan combined.

Dongfeng Motor Corporation is a Chinese state-owned automobile manufacturer headquartered in Wuhan,Hubei,China. Traditionally one of the "Big Four" Chinese automakers,Dongfeng is currently in the top four in terms of output along with Changan Automobile,FAW Group,and SAIC Motor.

GAC Toyota Motor Co.,Ltd. is an automobile manufacturing company headquartered in Guangzhou,China and a joint-venture between GAC Group and Toyota Motor Company. It was founded on 1 September 2004.

GAC Fiat Chrysler Automobiles Co.,Ltd. is an automobile manufacturing company headquartered in Changsha,China and a 50:50 joint-venture between GAC Group and Stellantis. The company was founded on 9 March 2010. Fiat agreed to invest an initial US$559 million in the venture. 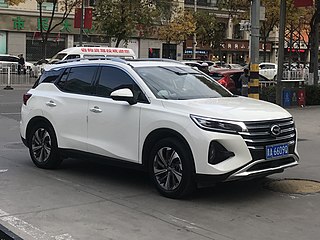 The Trumpchi GS4 is a compact crossover SUV of the late-2010s produced by GAC Group under the Trumpchi brand in China and the GAC Motor brand globally.

The Trumpchi GS5 is a compact crossover produced by GAC Group under the Trumpchi brand. The first generation was sold from 2011 to 2017 with a facelift variant called the GS5 Super launched in 2014,while the second generation model was sold starting in 2018. A facelift for the 2021 model year was launched during the 2021 Shanghai Auto Show,changing the name to Trumpchi GS4 Plus.

Leahead is an electric car sub brand by GAC Toyota,a joint venture between GAC Group and Toyota,founded in 2015.

SAIC Iveco Hongyan Commercial Vehicle Co.,Ltd. is a Chinese joint venture headquartered in Chongqing,China and owned by SAIC,the Chongqing city and Iveco. SAIC Iveco Hongyan was established in January 2003 as Chongqing Hongyan and traces its origins back to a Chinese manufacturer established in 1965. The company is focused on producing Iveco-based heavy trucks which are mostly marketed under the Hongyan marque.

Jiangling Motors Corporation Group Co.,Ltd. (JMCG) is a Chinese state-owned holding mostly operating in the automotive industry. It was established in 1947 and is headquartered in Nanchang,Jiangxi.

The Trumpchi GM6 is a compact MPV manufactured by GAC Group under the Trumpchi brand in China and the GAC Motor brand globally as the GAC GM6 or the GAC GN6.