Gamini Goonesena (16 February 1931 – 1 August 2011), born in Colombo, was a Sri Lankan first-class cricketer prior to his country being granted Test status. A gifted allrounder who was a right-handed batsman and legbreak/googly bowler, he played first class cricket over a 19-year timespan, 1949–1968, representing 14 different teams.

He was educated at Royal College Colombo where he played in the Royal-Thomian encounter. The Royal College first XI squad was hard at practice in the final week preceding the annual Royal-Thomian encounter. Goonesena was a mere 'net bowler' but coach F.C.de Saram, a percipient observer of the game and its players, in an inspired move, insisted that Goonesena be picked for the 'Big' match to be played over the weekend. This was an unprecedented move for a player to make his debut in the 'Big' match. Goonesena played and captured 4/46 in the match, dismissing both Thomian openers in the crucial second innings, as Royal cruised to a comfortable 9-wicket victory. In the 1948 fixture he announced his burgeoning potential with a match analysis of 10/80.

At Cambridge University between 1954 and 1957, he played in 52 matches and became the first Asian player to captain the side in his last year. As captain he scored 211 in the University match in 1957, which remains the highest individual score by a Cambridge player in University Matches. He then took 4/40 in the Oxford second innings to secure victory by an innings and 186 runs, the biggest margin of defeat since the series began in 1827. He and Geoffrey Cook, who scored 111, also put on 289 runs for the seventh wicket, setting the highest partnership for any wicket by either side in University Matches and the record partnership in first-class cricket for the seventh wicket at Lord's. Both records still stand as of April 2017. [1] [2]

His other principal clubs were Nottinghamshire (94 matches between 1953 and 1964) where he twice completed the 'double' of 1000 runs/100 wickets in a season. He also played in 7 consecutive games for the Gentlemen v Players between 1954 and 1958, which still remains an all-time record for an overseas player. He represented Ceylon against Pakistan in 1950 and again against an International XI in 1968 before they obtained Test status as Sri Lanka in 1982. He also toured the West Indies twice, with an EW Swanton international team in 1956 and with the International Cavaliers in 1965. He also appeared in 7 matches for the Australian state side New South Wales in the Sheffield Shield between 1961 and 1964. He was selected to tour England with the Ceylon team in 1968, but the tour was cancelled just before it was due to begin. [3]

In 1965 he was appointed as Ceylon's representative to the ICC International Cricket Conference and subsequently managed the Sri Lankan Test side on a tour of India. He also played club cricket for Waverley District Cricket Club (now Eastern Suburbs District Cricket Club) in Sydney in the 1970s. During the 1990s he became President of Colts CC, one of the oldest clubs on the island, and during this time he also worked as a Test Match commentator for Sri Lankan radio and television. He also joined the BBC Test Match Special commentary team when Sri Lanka toured England in 1984 and 1988. [4] He retired in 2004 to live in Sydney, Australia.

He died in Canberra aged 80, on 1 August 2011. Ian Pieris, a contemporary Sri Lankan who played under Goonesena at Cambridge, said: “Gamini was easily the best leg-spinner I have seen, and probably the best all-round cricketer this country produced after the War. He had a keen cricket brain, and as a captain, stood heads and shoulders above his contemporaries in England at a time when there were captains in the counties such as Peter May (Surrey), Colin Cowdrey (Kent) and Cyril Washbrook (Lancashire) to name a few. He always led from the front be it in bowling, batting or fielding. Gamini would throw himself totally into the game and never gave up. Sadly, Sri Lanka was not able to make proper use of his cricketing brain.”

Lalith Wasantha Silva Kaluperuma is a former Sri Lankan Test cricketer and ODI cricketer, who played first-class cricket from 1970 to 1983. He played in Sri Lanka's first Test team in 1982.

Anura Tennekoon is a former Sri Lankan cricketer and ODI captain of the Sri Lanka national cricket team. He was educated at the S. Thomas' College in Mount Lavinia.

Cricket was introduced to Sri Lanka in the first quarter of the 19th century, following colonisation of the island by the British. The earliest known match was recorded in 1832 and the earliest first-class one in 1926. The national team has played Test cricket from 1982. The national team has achieved international success by winning the 1996 Cricket World Cup and the 2014 ICC World Twenty20. Cricket is played nationwide with Test venues in Colombo, Galle, Kandy and Moratuwa. The country's most notable players includes Aravinda De Silva, Arjuna Ranathunga, Rangana Herath, Sanath Jayasuriya, Mahela Jayawardene, Muttiah Muralitharan, Kumar Sangakkara and Chaminda Vaas. Administration and governance are performed by Sri Lanka Cricket, which was founded in July 1922 as the Ceylon Cricket Association (CCA). The main domestic competition is the Premier Trophy which attained first-class status in 1988.

Clive Clay Inman is a former Sri Lankan cricketer who played first-class cricket for Ceylon from 1956 to 1966 and for Leicestershire from 1961 to 1971.

Dr Churchill Hector Gunasekara was a Ceylonese first-class cricketer. He was the first person from his country to play for an English county, representing Middlesex from 1919 to 1922. He was widely regarded as the best fielder in county cricket at the time.

James Daniel Piachaud is a retired Sri Lankan cricketer. Piachaud was a right-handed batsman and a right-arm off break bowler.

The Indian national cricket team toured Ceylon in November 1956 and played two internationals against Ceylon. As Ceylon had not then achieved Test status, the internationals are classified as first-class matches. Both games were played at the Paikiasothy Saravanamuttu Stadium in Colombo and ended as draws. 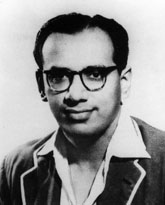 Sathyendra "Sathi" Coomaraswamy was a Sri Lankan first-class cricketer in the 1940s and 1950s, before Sri Lanka had Test status.

The Pakistan national cricket team toured Ceylon from mid-March to mid-April 1949 and played four matches including two internationals against the Ceylon national team. As neither country had yet achieved Test status, the internationals are classified as first-class matches. Both games were played at the Paikiasothy Saravanamuttu Stadium in Colombo and Pakistan won them both: the first by an innings and 192 runs; the second by 10 wickets. These two matches were the first four-day internationals played in Ceylon. Pakistan were captained by Mohammed Saeed and Ceylon by Derrick de Saram.

Charles Edward Manoharan "Mano" Ponniah is a Sri Lankan architect and engineer who played first-class cricket in Sri Lanka and England from 1964 to 1969.

The Ceylon cricket team toured India in December 1964 and January 1965. Ceylon did not then have Test status, but three four-day unofficial Tests were played, India winning 2–1. The tour also included five other first-class matches.

Herbert I. K. Fernando is a former cricketer who was Ceylon's principal wicket-keeper from 1953 to 1970. He was also a doctor and a brigadier in the Sri Lanka Army.

Anurudda "Anura" Polonowita is a former cricketer who played for Ceylon from 1960 to 1969. He later became a prominent cricket administrator and groundsman. In September 2018, he was one of 49 former Sri Lankan cricketers felicitated by Sri Lanka Cricket, to honour them for their services before Sri Lanka became a full member of the International Cricket Council (ICC).

The Ceylon cricket team toured India in December 1932 and January 1933. Ceylon did not then have Test status, but two three-day unofficial Tests were played, both of which were drawn. The tour also included four other first-class matches and four minor matches. It was the first tour abroad by a Ceylonese team. The victories against Patiala and Central Provinces and Berar were Ceylon's first victories in first-class matches.

The Ceylon cricket team toured Pakistan in March and April 1950. Ceylon did not then have Test status, but two four-day unofficial Tests were played, Pakistan winning both by large margins. The tour also included three other first-class matches and a minor match.

Patrick Covell Derrick McCarthy was a Ceylon-born cricketer who played first-class cricket for Ceylon in the 1940s before moving to Australia and playing for Western Australia in the 1950s.

Hilton Poulier was a cricketer who played on Ceylon's first tour in 1932-33.

Dayananda Sahabandu is a former cricketer who played first-class cricket for Sri Lanka from 1968 to 1975. In September 2018, he was one of 49 former Sri Lankan cricketers felicitated by Sri Lanka Cricket, to honour them for their services before Sri Lanka became a full member of the International Cricket Council (ICC).