Giuliano Stefano Luigi Grazioli (born 23 March 1975, in Marylebone) is an English former footballer who played as a striker from 1995 until 2009, notably for Barnet.

Raised in London of Italian origin, he attended Finchley Catholic High School in London.[ citation needed ] He scored in Stevenage Borough's fourth round FA Cup game against Newcastle United in the 1997/98 season to leave the game at 1-1 and force a replay. He has also had spells at Enfield, Bristol Rovers, Swindon Town and Peterborough United. He played for North London side Barnet and, during his time at the club, has had a loan spell with AFC Wimbledon, before closing out his career with spells at Braintree Town and Dover Athletic.

Grazioli's time at Peterborough is best remembered for the 5 goals he scored in the club's record win, a 9–1 victory [2] away at Barnet on 5 September 1998.

Grazioli joined Barnet as part of a deal that took Junior Agogo to Bristol Rovers. Rovers paid £110,000 for Agogo with Grazioli going the other way. He helped Barnet gain promotion from the Football Conference to the Football League in 2004/2005. He was the top scorer in the conference with 29 goals - seven more than nearest rival Michael Twiss of Morecambe. A hand injury kept Grazioli out of much of the following season - Barnet's first season back in League Two.

In January 2008 Grazioli was transfer-listed, mainly due to not being able to break into the first-team due to persistent injuries and lack of fitness. On 31 January, deadline day, he rejected a loan move to Grays Athletic. On 26 April 2008, Grazioli played his last ever home game for Barnet, as a substitute against Stockport County, in which he received a standing ovation from the fans in appreciation of his prolific goal scoring which took the Bees into the Football League.

Grazioli joined Conference South side Braintree Town in August 2008. But after only a month, he signed for Isthmian League side Dover Athletic on 11 September 2008 and made his debut for them as a substitute in a 2–1 win over Tonbridge Angels in the FA Cup. Grazioli made over 20 appearances for Dover Athletic before announcing his retirement in March 2009 due to a sustained head injury. His final appearance came in a 0–0 draw with Staines Town.

It was reported in June 2009 that he had been appointed as a scout at Bristol Rovers. [5] In April 2010 he rejoined Barnet in a new role as community development officer. [6] After the appointment of Martin Allen as manager of Barnet in March 2011, Grazioli was made Allen's assistant. [7] In April 2011 after the shock resignation of Allen to go to Notts County Grazioli was appointed caretaker manager for the rest of the season with Lawrie Sanchez acting as Director of Football. His first game in charge was a 2–0 defeat at Bury. The Bees went into the final day of the season two points behind Lincoln City and following a 1–0 win at home to Port Vale coupled with a 3–0 defeat to Aldershot for Lincoln, it was the Imps who suffered relegation to the Conference National, completing a miraculous revival for Barnet, who had spent practically the entire season in the bottom two.

In May 2011 he was appointed as the club's new assistant manager to Lawrie Sanchez. He left the club at the end of the 2011–12 season. In September 2012, Martin Allen announced that Grazioli has been scouting for Gillingham. [8] 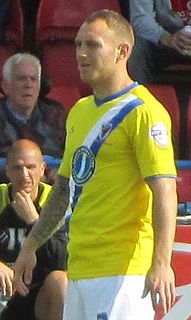 Barry Marc Fuller is an English professional footballer who plays as a defender for Dorking Wanderers. He previously played for Stevenage Borough, forming part of the squad that won the 2006–07 FA Trophy in the first competitive final at the new Wembley Stadium after they beat Kidderminster Harriers 2–1 on 12 May 2007 in front of a record FA Trophy crowd of 53,262. Fuller has also made over 200 appearances for Gillingham and was captain of the squad that beat Shrewsbury Town 1–0 in the League Two play-off final at Wembley Stadium on 23 May 2009 to win promotion to League One.

Manuel "Junior" Agogo was a Ghanaian professional footballer who played as a striker. He was born in Ghana but spent most of his childhood in the UK. He then moved back to Ghana during his years in secondary school. He began his youth career at Sheffield Wednesday in 1995, moving up to the senior squad in 1997. He played for fifteen different clubs over the next fifteen years, before retiring from professional football in 2012. He spent most of his playing career in England, with additional spells in the US, Egypt, Cyprus and Scotland. His longest spell was at Bristol Rovers (2003–2006), where he made 140 appearances before moving to Nottingham Forest.

Adam Stephen Birchall is a retired footballer who played as a forward and currently serves as Head Coach for the Arsenal U14 side.

Glenn Stephen Poole is an English footballer and player-coach for Grays Athletic in the Isthmian League North Division.

Charles David Clough is an English footballer who plays as a defender for Singapore Premier League side Brunei DPMM FC.

Elliott Grant Charles is an English-born Grenadian footballer who plays as a striker for Hendon and the Grenada national football team.

Mikhael Aimar Jaimez-Ruiz is a Venezuelan professional footballer who plays as a goalkeeper.

Abumere Tafadzwa "Abu" Ogogo is an English professional footballer who plays as a midfielder for League One club Bristol Rovers.

Shane Gore is an English footballer who plays as a goalkeeper. He currently plays for Cheshunt of the Isthmian League Premier Division.

Edward James Upson is an English professional footballer who last played as a midfielder for League One club Bristol Rovers.

Jack William Midson is an English semi-professional footballer who plays for Sheppey United.

Harry David Balraj Pell is an English professional footballer who plays as a midfielder for League One club Accrington Stanley.

Keanu Marqheal Marsh-Brown is a professional footballer who currently plays as a winger for Wrexham. Born in England, he represents Guyana internationally.

This page shows the progress of Gillingham in the 2011–12 season. This season they played their league games in Football League Two, the fourth tier of English football.

Samuel Lloyd Matthews is an English footballer who plays as a midfielder for Crawley Town.