David Rhys Remington Stephens (born 8 October 1991) is a British footballer who plays as a defender. Stephens has previously played for Norwich City, Lincoln City and Hibernian. He has represented Wales at youth international levels up to and including the Wales under-21 team.

Born in Welwyn Garden City, Hertfordshire, [1] Stephens joined Norwich City's Academy as a 13-year-old. He was initially preferred in a central midfield role, but is now primarily thought of as a central defender.

Stephens signed a professional contract with Norwich in June 2009. His first team debut came on 6 October 2009, as a substitute in a 1–0 win over Gillingham in the Football League Trophy. [2] On 19 March 2010, Stephens joined Football League Two side Lincoln City on loan for the remainder of the 2009–10 season. [3]

Stephens signed for Scottish Premier League team Hibernian on a three-year deal in July 2010. [4] Stephens made his debut for Hibs as a substitute in the opening day 3–2 win at Motherwell on 15 August. [2] He made 29 appearances in just over two years with Hibs. [5]

Stephens left Hibs on 31 August 2012 and signed for Football League Two club Barnet. [5] [6] Stephens played regularly for Barnet, forming several different centre back partnerships throughout the course of the 2012–13 season. Stephens was voted Barnet's Player of the Season by supporters in 2012–13 and again in 2013–14. After promotion in 2014–15, Stephens rejected a new deal at Barnet and left the club on 1 July 2015. [7] In October of that year, Stephens joined Boreham Wood.

Stephens made his debut for the Wales under-17 side on 27 August 2007 in a 2–1 friendly win over Belgium, [8] before scoring his first goal for the side two days later as a substitute during a second 2–1 victory over Belgium. [9] Having established himself in the team, he featured in all three matches of the first qualifying round as well as in two matches of the elite round of qualifying for the 2008 UEFA European Under-17 Football Championship, scoring his second under-17 goal in a 1–1 draw with Slovenia. [10] He made his final appearance at under-17 level on 19 July 2008 in a 1–0 defeat to Sweden. [11]

Graham Christopher Stack is a professional football coach and former player, who is currently the assistant coach and the head of academy goalkeeping at Watford. Stack played as a goalkeeper for Arsenal, Beveren, Millwall, Reading, Leeds United, Wolverhampton Wanderers, Plymouth Argyle, Blackpool, Hibernian, Barnet, Kerala Blasters and Eastleigh. He also played in under-21 internationals for the Republic of Ireland.

Alan O'Brien is a former Irish footballer who last played for Wealdstone. O'Brien, who played as a winger, represented the Republic of Ireland at full international level five times, all while he was on the books of Newcastle United.

Liam Vaughan Henry Fontaine is an English footballer, who plays as a defender for Dundee. He previously played in the English leagues for Fulham, Yeovil Town and Bristol City, and in the Scottish leagues for Kilmarnock, Hibernian and Ross County.

David Peter Gray is a Scottish footballer, who plays as a right-back for Hibernian, where he is also the current club captain. He represented Scotland at both under-19 and under-21 level. 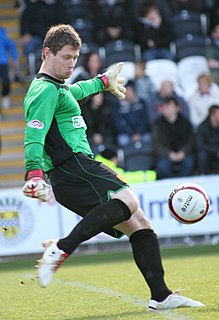 Graeme Meldrum Smith is a Scottish footballer who plays as a goalkeeper for Stenhousemuir. He started his career at Rangers and has also played for Ross County, Motherwell, Brighton, Hibernian, Gabala, Partick Thistle, Ayr United and Brechin City.

Lewis Stevenson is a Scottish professional footballer who plays for Scottish Premiership club Hibernian as a left back or a midfielder. He is currently the longest serving player at the club, having made his debut in September 2005. Stevenson is the only Hibs player ever to have won both the Scottish League Cup and the Scottish Cup, doing so in 2007 and 2016 respectively. He made his first full international appearance for Scotland in May 2018.

Gary Richard Deegan is an Irish professional footballer who plays as a midfielder for League of Ireland Premier Division club Drogheda United. Beginning his career in his native Ireland, he played in the Scottish Premiership for Hibernian and various clubs in all three divisions of the English Football League.

Paul Hanlon is a Scottish footballer, who plays for Scottish Premiership club Hibernian and the Scotland national team as a defender. He began his senior career with Hibernian, making his debut in 2008, and has gone to make over 420 appearances for the club. He also briefly played for St Johnstone on loan during the 2008–09 season.

Thomas James William Taiwo is an English former footballer who played as a midfielder.

Owain Tudur Jones is a Welsh former footballer who played as a defensive midfielder. He represented the Wales national football team and during his club career he played for Porthmadog, Bangor City, Swansea City, Swindon Town, Norwich City, Yeovil Town, Brentford, Inverness Caledonian Thistle, Hibernian and Falkirk. He is currently assistant manager of Wales C. He is also currently a presenter for the Welsh football show Sgorio on S4C.

David Wotherspoon is a professional footballer who plays for St Johnstone, and the Canada national team as a midfielder. Wotherspoon started his career with Hibernian. Born in Scotland he represented his nation of birth at youth international levels, up to and including the under-21 level before switching to Canada in 2018.

Georgie Francomb is an English professional footballer who plays as a midfielder for League Two club Crawley Town. He can also play at right-back.

Mark Thomas Oxley is an English professional footballer who plays as a goalkeeper for Southend United.

Dylan McGeouch is a Scottish footballer, who plays for Aberdeen as a midfielder. McGeouch, who has previously played for Celtic, Coventry City, Hibernian and Sunderland, made his first full international appearance for Scotland in May 2018.

Samuel Stanton is a Scottish footballer who plays as a midfielder and is currently singed to Dundalk FC. He has also previously played for Dundee United. Hibernian, Cowdenbeath, Livingston and Dumbarton on loan, and represented Scotland at youth international level.