Gordon Alec Hill (born 1 April 1954) is an English former footballer who played in the Football League for Millwall, Manchester United, Derby County and Queens Park Rangers, and was capped six times for the England national team. [1] [2]

In 1971 after leaving Longford School Hill began his club career with Staines Town of the Athenian League as a 17-year-old. In 1972, he moved to Southall F.C., playing a few youth games there while his brother was on trial at the club. He drew the attention of Millwall F.C. and signed with them in 1973. Known to The Lions fans as 'Merlin', Hill had outstanding skill that earned him wide recognition. The Millwall youngster entertained the fans with high-class shooting and dribbling and it was not long before scouts from big clubs noticed him. He played 91 league games for Millwall, scoring 22 goals. [3] After spending the summer of 1975 on loan with the North American Soccer League's Chicago Sting, and being named All League, [4] Hill subsequently signed for Manchester United in November 1975 for £70,000, a bargain for manager Tommy Docherty, forming a wing partnership with Steve Coppell.

Hill helped United reach the 1976 FA Cup Final, scoring both goals with typical long-range efforts in the semi-final at Hillsborough Stadium against Derby County. Unfortunately for Hill, United lost in the Final against Southampton. He was also part of the 1977 FA Cup-winning side. Hill left United for Derby County for £250,000 in 1978, with his sale by Dave Sexton deeply unpopular with supporters. At the time of his sale, Hill was United's top scorer and a favourite among fans. [5] He spent two seasons with Derby County, most of it sidelined with a knee injury suffered in one of his first games, before moving to Queens Park Rangers in 1980. He left England for the Montreal Manic of the NASL in 1981. After a successful first season with the Manic, he began the 1982 season in Montreal, but after five games the Manic sent him to the Chicago Sting. In the fall of 1982, the Sting entered the Major Indoor Soccer League for the winter indoor season. Hill began the season with the Sting, and moved to the San Jose Earthquakes after eleven games. In January 1983, the Earthquakes turned around and traded Hill and Gary Etherington to the New York Arrows in exchange for Steve Zungul. [6] In the summer of 1983, Hill played for Inter-Montreal of the Canadian Professional Soccer League. [7] In the autumn of 1983, Hill signed with the Kansas City Comets of MISL. He played one season with the Comets, then began the 1984–85 season before being released. In December 1984, he signed with the Tacoma Stars. [8]

He joined FC Twente in the Dutch Premier Division for the 1985–86 season, playing 19 times and scoring four goals. He spent the summer of 1986 in Finland with HJK Helsinki, scoring two goals in as many appearances before returning to England where he played under his former teammate Stuart Pearson at Northwich Victoria, before retiring from the game.

In the summer of 1991, Hill was managing director, Head Coach and Player of the Nova Scotia Clippers in the team's only year in the Canadian Soccer League, where he took the club to the playoffs. [9] In 2001, he briefly managed Chester City during their spell in the Football Conference, and had a short spell managing Hyde United. He was the Director of coaching (Boys) for Cleveland United SC 2012–13. Hill admits that any promising players would be steered towards his former team.

He returns to the UK several times a year with groups of players to play games in the Manchester area. [10] Currently, Gordon is owner of United Sports based in the United States, having a partnership with Chesterfield FC, sending young players to work with them in their development squad. Gordon is still interested in continuing his management career.

During his career, Hill played at every level for England: as an amateur, youth, under 23, England B and full International, at which level he won six full caps between 1976 and 1977. [11]

"Only a game?" by Eamon Dunphy where Gordon is one of the new young members of the Millwall team where he falls for a lot of the wind ups that the team play on him. 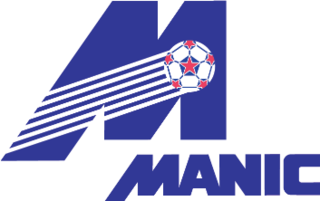 The Montreal Manic or the Manic de Montréal were a professional soccer team based in Montreal, Quebec, Canada, that played in the North American Soccer League. The Montreal Manic were brought back in 2020 by Canadian businessman Gary Gaul as an academy with boys and girls from U5 – U23.

The 1984 North American Soccer League season was the 72nd season of FIFA-sanctioned soccer, the 17th with a national first-division league, in the United States and Canada. It would be the 17th and final season of the NASL.

James Steele is a Scottish former football centre back who played professionally in Scotland, England and the United States. He helped Southampton win the 1976 FA Cup Final.

Duncan McKenzie is an English former footballer who played as a striker in the Football League for Nottingham Forest, Mansfield Town, Leeds United, Everton, Chelsea and Blackburn Rovers in the 1970s, in Belgium for Anderlecht, in the North American Soccer League for the Tulsa Roughnecks and the Chicago Sting, and for Ryoden in Hong Kong.

Gary Etherington is a retired English-American soccer player who began his professional career in the North American Soccer League before moving to the Major Indoor Soccer League. He earned seven caps with the U.S. national team. Since retiring, Etherington has coached youth soccer and is a soccer equipment salesman.

Gene Geimer is a former U.S. soccer forward who spent seven seasons in the North American Soccer League and at least one season in Major Indoor Soccer League. Before entering the professional ranks, Geimer won a National Amateur Cup with St. Louis Kutis in 1971. He also earned six caps, scoring two goals, with the United States in 1972 and 1973.

Mark Anthony Towers is an English former professional footballer who played as a midfielder for Manchester City, Sunderland, Birmingham City, Rochdale and England.

Statistics of North American Soccer League in season 1981. This was the 14th season of the NASL.

Lawrence Adam Michael Abrahams is an English retired professional footballer who played as a striker in England, the United States, and Australia. In a career which lasted from 1977 to 1987, Abrahams played 283 career league games, and scored 142 league goals.

Stewart McNab Adam Scullion is a Scottish former footballer, who played as a winger. Born in Bo'ness, Scotland, he started his professional career in the Football League, helping Watford to the Third Division title, and then spending three seasons at Sheffield United. After a second spell at Watford, he joined Tampa Bay Rowdies in the North American Soccer League. He was their second highest goalscorer in his first season, and in both years was named in the league's second All-star team. Scullion briefly returned to England with Wimbledon, before finishing his professional career in America with the Portland Timbers.