Anthony Guy Cascarino (born 1 September 1962) is a former professional footballer who played as a forward for various British and French clubs and internationally for the Republic of Ireland national team, with whom he competed in UEFA Euro 1988 and two World Cups in 1990 and 1994.

Since retirement, he has presented on TalkSPORT radio and written for both The Times and Ireland's Hot Press magazine. He has worked for both Sky Sports in England and TV3 and Today FM in Ireland. He was a winning participant in the fourth season of the Celebrity Bainisteoir reality television series.

Cascarino joined Gillingham in 1982 from Crockenhill, and according to Cascarino Gillingham donated tracksuits and training equipment to Crockenhill in lieu of a transfer fee. [3] He went on to play for Millwall - the club he supported as a boy. Millwall had missed an opportunity to sign Cascarino as a youngster and subsequently paid The Gills £225,000 to secure his services. [4]

Cascarino holds the Ligue 1 record for oldest player to score a hat-trick, which he did while playing for Nancy at age 37 years and 31 days. [5]

Cascarino, who was born in England, represented the Republic of Ireland—qualifying through his adopted Irish grandfather, Michael O'Malley, who was from Westport, County Mayo. He was also eligible to play for both Scotland and Italy because of his Scottish and Italian descent. [6] [7] [8]

He made his international debut against Switzerland in September 1985, during Ireland's ill-fated qualification campaign for the 1986 World Cup. [9] Cascarino would go on to feature for Ireland in three major tournaments: Euro 1988, the 1990 World Cup and the 1994 World Cup. [10]

His last international game came against Turkey in late 1999, as Ireland failed to reach UEFA Euro 2000. He got into a brawl with a Turkish defender and left the pitch showing the scars of battle. This marked the end of an international career which had spanned 14 years at the highest level. [11]

In October 2000, Cascarino was the subject of national newspaper headlines when extracts from his upcoming autobiography were published in the Sunday Mirror. [12] In it, he revealed that his mother told him in 1996 that she was adopted and therefore no blood relative to his Irish grandfather. Cascarino said in his autobiography: "I didn't qualify for Ireland. I was a fraud. A fake Irishman". The FAI's Chief Executive Bernard O'Byrne stated that he was shocked by the announcement and Cascarino's former international manager Jack Charlton questioned why he came forward with the information. Cascarino revealed that Republic of Ireland teammate Andy Townsend had advised him to keep quiet about the situation. [12]

Four days after the newspaper exclusive, in November 2000, the Football Association of Ireland issued a short statement: "The FAI are satisfied that Tony Cascarino was always eligible to become a citizen of the Republic of Ireland and was, therefore, always eligible to play for Ireland." [13] The Irish Independent reported that Cascarino was given a 'passport of restricted validity' in 1985 and that his mother's name, Theresa O'Malley, was in fact entered in the Foreign Births Register in the Department of Foreign Affairs prior to Cascarino's international debut for the Republic of Ireland. [14] [15]

Since retiring from football, Cascarino has become a semi-professional poker player, having appeared in the television series Celebrity Poker Club and commentating on the PartyPoker Poker Den. He has become something of a cult figure and was referenced in the song "All Your Kayfabe Friends" by Welsh band Los Campesinos! where the singer tells that "You asked if I'd be anyone from history / Fact or fiction, dead or alive / I said I'd be Tony Cascarino, circa 1995." [16]

Cascarino joined talkSPORT as a pundit in 2002 and from 2004 he presented the afternoon Drive Time show with Patrick Kinghorn. He was involved in an on-air bust-up with Kinghorn after the latter remarked that the married Cascarino had been "chasing that 21-year-old around the office", which prompted Cascarino to lunge at Kinghorn and punch him. They pair had to be pulled apart by production staff. [17] Cascarino left the station in 2005 although still sometimes returns as a guest pundit. [18]

In 2011, he was a winning participant in the Celebrity Bainisteoir reality series. Managing Killeshin GAA Club of County Laois, Cascarino's club won the season 4 competition, [19] beating Paul Gogarty's Oughterard team after extra-time in the final. [20] [21]

The book detailed his love of gambling, particularly playing all forms of poker, and revealed that his career had been blighted by crippling self-doubt, which he summarised as the "little voice". [25] The book also candidly refers to his shame over his infidelities [26] and of leaving his wife, Sarah and two sons, Michael and Teddy (who was named after Cascarino's former Millwall teammate Teddy Sheringham) and muses: "...maybe, just maybe, I was so wrapped up in my newfound celebrity that I'd become immune to the suffering I was causing".

He also revealed that during his time at Marseille, he and many other of the club's players were injected by club president Bernard Tapie's personal physician with an unknown substance. The physiotherapist at the time insisted the substance was legal and would provide an "adrenaline boost". Cascarino claimed that most players accepted the injections [27] and that "it definitely made a difference: I felt sharper, more energetic, hungrier for the ball". He also later admitted suffering from depression. 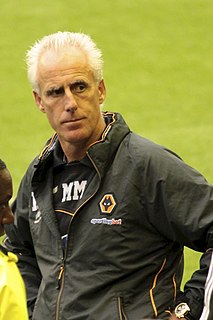 Michael Joseph McCarthy is an Irish professional football manager, pundit, and former player. He is currently the manager of Cardiff City in the EFL Championship. Born in Barnsley, England, with an Irish father, he played for the Republic of Ireland on 57 occasions scoring two goals.

Éamon Martin Dunphy is an Irish media personality, journalist, broadcaster, author, sports pundit and former professional footballer. He grew up playing football for several youth teams including Stella Maris. Since retiring from the sport, he has become recognisable to Irish television audiences as a football analyst during coverage of the Premier League, UEFA Champions League and international football on RTÉ. 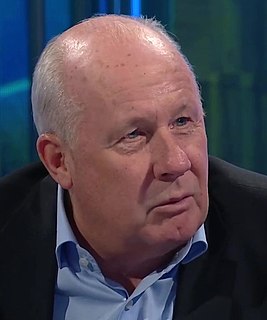 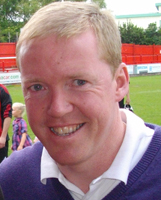 Stephen Staunton is an Irish association football manager and former professional footballer who played as a defender. He earned 102 caps for the Republic of Ireland national football team, captained his team to the knock-out stage of the 2002 FIFA World Cup and earned his place in the FIFA Century Club. 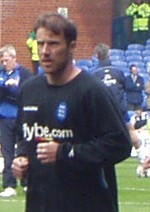 Kenneth Edward Cunningham is an Irish former footballer who played as a defender. He played international football for the Republic of Ireland until his retirement in 2005. He spent his professional club career, from 1989 to 2007, in England, making more than 500 appearances in the Football League and Premier League playing for Millwall, Wimbledon, Birmingham City and Sunderland.

Paul Nicholas Gogarty is an Irish Independent politician who has served as a South Dublin County Councillor for Lucan since May 2014. He previously served as a Teachta Dála (TD) for the Dublin Mid-West constituency from 2002 to 2011.

The Poker Million has been a televised European poker tournament since its inception in November 2000. The final debuted to 30 million viewers and has since remained popular. It was created by UK gaming outfit Ladbrokes with the help of sports promotion firm Matchroom Sport. In 2009 sponsorship was transferred from Ladbrokes to Full Tilt Poker, which produced Poker Million VIII.

David Forde is an Irish former professional footballer who played as a goalkeeper. Internationally, Forde played for the Republic of Ireland between 2011 and 2016 and was part of the team's 23-man squad for the 2012 European Championships. In 2013, he became the oldest player to make their competitive debut for the Republic of Ireland, when he played against Sweden at the age of 33.

P. J. Gallagher is an Irish stand-up comedian and actor, perhaps better known from his television show Naked Camera. His various characters in the programme include a mentally unstable taxi driver, ladies' man Jake Stevens and a "Dirty Auld One", an old woman who makes sexual comments.

Derek Davis was an Irish broadcaster. On television, he co-hosted Live at 3, presented Davis at Large and Out of the Blue and won Celebrity Bainisteoir.

Anthony Patrick Grealish was a professional footballer who played as a midfielder. Born in England to Irish parents, he represented the Republic of Ireland at international level.

Celebrity Bainisteoir is a prime-time reality programme broadcast by RTÉ and produced by Animo Television/Kite Entertainment. Created by Fiona Looney, it involved a number of celebrities competing against each other as a Gaelic football team coach; the title derives from the Irish word for a manager, bainisteoir[ˈbanʲəʃtʲoːɾʲ].

The first season of Celebrity Bainisteoir was broadcast in Ireland on RTÉ One from 23 March 2008. It was won by the radio and television presenter Marty Whelan who replaced Fianna Fáil TD Mary O'Rourke as bainisteoir of Maryland, County Westmeath, during the series. Whelan's team beat solicitor Gerald Kean's Cork team, Mayfield, in the final at Parnell Park on 16 May that year.

The second season of Celebrity Bainisteoir was broadcast in Ireland on RTÉ One from 22 March 2009 until 10 May 2009. 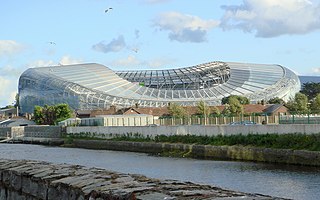 This is a sortable list of all association football matches played by the Republic of Ireland national football team since 1924.

Jayson Patrick Molumby is an Irish professional footballer who plays as a midfielder for Preston North End, on loan from parent club Brighton & Hove Albion, and the Republic of Ireland national team. Molumby was born in Cappoquin, County Waterford and played youth football with Villa FC, Railway Athletic and Brighton & Hove Albion, where he made his debut in the EFL Cup.