He is perhaps most famous for scoring a hat-trick against Barcelona in Camp Nou, eliminating them in the first round of the 1984–85 Cup Winners' Cup with Metz, something that has been described in the British Guardian as the biggest European football upset ever. [1]

In that same year, Kurbos assisted and scored in extra time of the Coupe de France final. In front of 45,000 spectators Metz won the match against Monaco 2–0, claiming their first major trophy ever.

Football Club de Metz, commonly referred to as FC Metz or simply Metz, is a French association football club based in Metz, Lorraine. The club was formed in 1932 and plays in Ligue 1, the first level in the French football league system. Metz plays its home matches at Stade Saint-Symphorien located within the city. The team is currently managed by Vincent Hognon. In their 85-year history, Metz have spent 60 seasons in Ligue 1 and 17 seasons in Ligue 2. They have won the Coupe de France twice and the Coupe de la Ligue twice.

Franck Gaston Henri Sauzée is a former French international footballer and manager. He played 39 times for the French national team between 1988 and 1993, scoring nine goals and captaining the team several times. He achieved great success at club level during the same period, winning the 1993 UEFA Champions League Final and three league titles with Marseille. Later in his career he earned great plaudits for his performances for Scottish club Hibernian, whom Sauzée subsequently managed for a short period. Since ending his active involvement in professional football, Sauzée has worked as a football pundit for French television networks.

Raí Souza Vieira de Oliveira, known as Raí, is a Brazilian retired footballer who played as an attacking midfielder. He is the current General Manager for São Paulo. 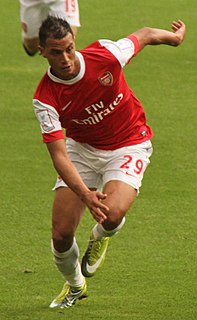 Marouane Chamakh is a retired professional footballer who played as a forward. He is described as a prototypical target man and is noted for his "link-up play", "tall stature" and "excellent heading ability". Chamakh is also Bordeaux’s eighth highest goalscorer of all-time. 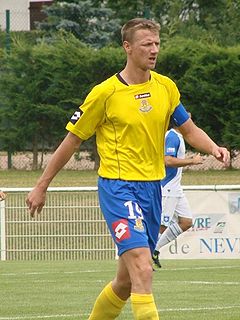 Tony Vairelles is a French retired footballer who played as a striker.

AS Monaco won Division 1 season 1987-88 of the French Association Football League with 52 points.

AS Monaco won the 1977–78 Division 1 season of the French Association Football League with 53 points.

The 1984 Coupe de France Final was a football match held at Parc des Princes, Paris, on 11 May 1984 that saw FC Metz defeat AS Monaco FC 2–0 thanks to goals by Philippe Hinschberger and Tony Kurbos.

Yvon Pouliquen is a French football manager and former footballer. He played as a defensive midfielder for 14 seasons and made 455 appearances in the French league. He then spent several years as a manager, and won back-to-back Coupes de France, in 2001 with Strasbourg and in 2002 with Lorient, as well as a taking Metz to the quarter finals in 2008.

Gueïda Fofana is a former French footballer. He was a French youth international and has captained at all levels of youth. In 2010, he captained the France team that won the 2010 UEFA European Under-19 Football Championship on home soil. He operated as a defensive midfielder, but could also play as a defender and was known for his physical style of play. Fofana had been compared to Arsenal legend Patrick Vieira, however he was forced to retire on 18 January 2017 due to ongoing injury problems.

Yeni Atito Ngbakoto is a professional footballer who plays for En Avant de Guingamp and the DR Congo national football team. He primarily plays as a winger, but is capable of playing as a striker.

Ismaïla Sarr is a Senegalese professional footballer who plays as a winger for Premier League club Watford and the Senegal national team.