Grant opened in September 1924, with 1,191 students. [4] Many of the schools in the Portland Public School district that were built between 1908 and 1932 were designed by architects Floyd Naramore and George Jones. However, so many schools were being built simultaneously in Portland in the early 1920s, that the district had to hire another architectural firm to design Grant High School, which was in the Classical Revival style by architects Knighton and Howell. In November 1923, the bricklayers working on Grant went on strike after the district tried to cut costs by using a maintenance worker to lay bricks. [5] [6]

After the Vanport flood in May 1948, Grant was home to the Vanport Extension Center (now Portland State University) through the summer of that year. [7] Three motion pictures have been filmed at Grant High School: The made-for-TV movie Reunion (1980), Mr. Holland's Opus (1995), and Nearing Grace (2005).

Funded by a $482 million bond measure approved in 2012, A two-year modernization and expansion project of Grant High School began in June 2017 and was completed in the summer of 2019. The interior of the building was gutted and has been completely rebuilt. The project includes a new three-story common area, a new gymnasium, seismic retrofitting, and additional classroom space. [8]

In 2011, Grant's student newspaper, The Grantonian, was replaced by the 36-page full-color monthly Grant Magazine. In its first year, the magazine won Best In Show at the Oregon Fall Press day. [16] It has also won the Columbia University Scholastic Press Association's Gold Crown award three years in a row, from 2014 through 2016. [17]

GHS's mascot is the Grant General, in honor of its namesake General and 18th US President, Ulysses S. Grant.

Sunset High School is a public high school in Beaverton, Oregon, United States. The school currently offers the International Baccalaureate Diploma Programme. It opened in 1959 and is the second-oldest of the six high schools in the Beaverton School District. Sunset's athletic teams are known as the Apollos.

Southridge High School is a public high school in Beaverton, Oregon, United States. The school currently offers the International Baccalaureate program, and some Advanced Placement courses. Southridge was one of the projects paid for by the $146 million bond approved in 1996. The school opened to 9-11th grades in 1999 with an initial enrollment of 1,236, grade 12 was added the following year. Sarah Boly was the school's first principal. 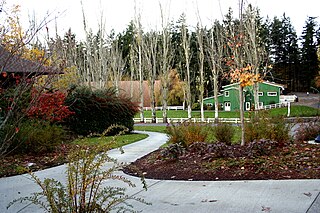 The Catlin Gabel School is an independent preschool through 12th grade institution located on 67 acres in Portland, Oregon 5 miles west of downtown. Annual enrollment is approximately 780 students from a wide variety of cultures, backgrounds, and financial abilities across the Portland metro area. The school’s educational philosophy is founded on the four principles of progressive education.

Benson Polytechnic High School is a technical public high school in the Portland Public Schools district. It is temporarily located in Portland's Lents neighborhood while a renovation project is underway at its 9-acre (3.6 ha) campus in the Central Eastside commercial area of Portland, Oregon, United States. Students are given a special emphasis in a technical area. The school is a member of SkillsUSA and Health Occupations Students of America. 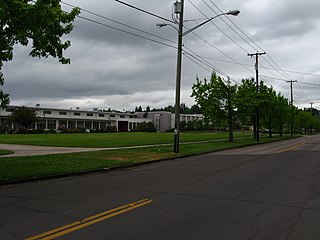 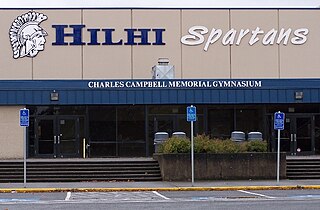 Hillsboro High School is a public high school in Hillsboro, Oregon, United States, and is the oldest high school in the Hillsboro School District. The current campus was built beginning in 1969. Prior to this, the first campus opened in 1913 at 3rd Avenue and Grant Street; the second campus, built in 1928, was located downtown at 6th Avenue and Lincoln Street, where J.B. Thomas Middle School stood until 2009. Currently 1,195 students attend the school in grades 9–12. The official school colors are blue and white with red and black as accents, and the mascot is the Spartan.

Franklin High School is a public high school in Portland, Oregon, United States. It is located in central southeast Portland in the South Tabor neighborhood. 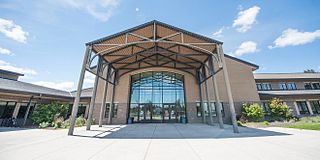 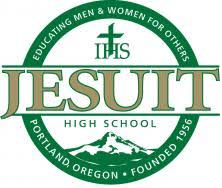 Jesuit High School is a private, Catholic, college-preparatory school run by the USA West Province of the Society of Jesus in Beaverton outside Portland, Oregon, United States, in the Archdiocese of Portland. It was founded by the Jesuits in 1956 and uses a Jesuit, college-preparatory curriculum. It is coeducational and enrolls approximately 1,300 students of all faiths.

Mel Krause was an American college baseball coach and player at the University of Oregon. He also played professional baseball in the Northwest League. Krause also played college basketball for Oregon and coached two different high school basketball teams to Oregon state basketball championships. Prior to its planned reinstatement in 2009, Krause was the last Ducks baseball coach when the university canceled the sport in 1981.

Westview High School is a public high school in Portland, Oregon, United States, in the Beaverton School District. It opened in 1994 and its first graduating class was in June 1996. 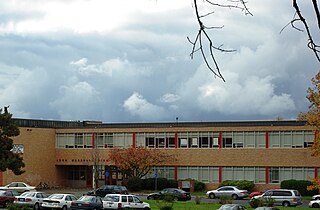 Lincoln Hall is an historic building located in Portland, Oregon, built in 1912. It is the home of the theatre, film, and performing arts departments at Portland State University. It was originally home to Lincoln High School before becoming a part of the Portland State College in 1955.

James John High School was a public high school in the city of St. Johns, Oregon that later became part of Portland Public Schools after St. Johns was annexed to Portland in 1915. The school opened in 1911 and had four students in its first graduating class. It closed in 1923 after the completion of its replacement, Roosevelt High School. It was named for James John, the founder of the St. Johns settlement.