Last updated August 30, 2020
For other ships with the same name, see HMS Chanticleer.

HMS Chanticleer was a Cherokee-class 10-gun brig of the Royal Navy. Chanticleer was launched on 26 July 1808. She served in European waters (mainly the North Sea) during the Napoleonic Wars and was paid off and laid up at Sheerness in July 1816. She was chosen for an 1828 scientific voyage to the Pacific Ocean. Her poor condition on her return meant that the Admiralty replaced her for the second voyage in 1831 with another Cherokee-class brig, Beagle, which subsequently became famous because of the association with Charles Darwin. Chanticleer then spent 15 years as a customs watch ship at Burnham-on-Crouch and was broken up in 1871.

Her initial base was Great Yarmouth. She was commissioned in September 1808 under Commander Charles Harford, but he drowned in an accident on 19 October, so Commander Richard Spear took command in November 1808. On 27 July 1809, Chanticleer captured the Russian lugger Emperor. [1] Then on 24 October, Sheldrake captured the Jupiter. Leverett and Chanticleer shared in the prize money by agreement. [2]

On 2 September 1811 while off the coast of Norway, Chanticleer became involved in an action with three 18-gun brigs of the Royal Danish Navy, Lolland , Alsen and Samsøe. [3] Outgunned and outnumbered, Chanticleer made good her escape, leaving her consort, Manly, for the Danes to capture.

On 28 August 1810, Chanticleer captured the Dutch fishing boat Hoop. [4] Chanticleer was under the command of John G. M'Bride M'Killop (Acting Commander) when she took possession of the derelict vessel Haabet on 16 November 1811. [Note 1]

On 23 October 1812, Chanticleer, Clio and Oberon captured the Jonge Henrick. [9]

Chanticleer served chiefly as an escort vessel and cruised off the European coast. Commander Stewart Blacker assumed command in May 1813. [10] In 1813, she took three prizes near the German archipelago of Heligoland in the North Sea. Commander J. Thomson replace Blacker in July 1814. [10]

In August 1815 Chanticleer, under the command of Lieutenant George Tupman (Acting), was part of the British force that captured Guadeloupe. She swept one beach of the few French troops that made an appearance; she then provided cover at another beach. [11] [Note 2]

On 2 October 1815 Chanticlear and Barbadoes brought a French brig into Antigua. The brig was carrying 208 slaves from Africa and some ivory tusks. [13]

Chanticleer was at Chatham in 1817. On 23 October 1821 Captain Henry Eden took command. He sailed her to the Mediterranean, [10] where he was "very efficiently occupied during the revolution in Greece." [14] Commander Burton Macnamara replaced him in July 1822. Two months later Chanticleer was dispatched to Fanari, Preveza, to supervise evacuation of the Souliotes. [15]

Charles James Hope Johnstone took command in September 1824, still in the Mediterranean. He was posted in December 1826 and command devolved to an acting commander until April 1827, when Commander John Balfour Maxwell took command. [10]

Chanticleer was dispatched on a scientific expedition in the Pacific Ocean in 1828 under the command of Captain Henry Foster, who had taken command in December 1827. [10] He explored the South Atlantic, and especially the South Shetland Islands; Port Foster on Deception Island, which is the caldera of an extinct volcano, is named after him. On the expedition, the ship visited the River Plate and Staten Island of Argentina, Cape Horn of Chile at the southernmost tip of South America, New Zealand, South Georgia, and rounded the Cape of Good Hope. From there she sailed back to South America via Saint Helena, Ascension Island and Fernando de Noronha. Chanticleer reached the South American coast at Saint Louis, Maranham. [Note 3] From there she sailed up the Amazon river to Pará. Chanticleer next arrived at Port of Spain, Trinidad, sailing from there to La Guaira and on to Portobelo, Colón. Foster sent his first lieutenant, Horatio Thomas Austin across the Isthmus of Darien. After Austin returned, Foster set out to conduct some more scientific tests in the same area. Unfortunately, after he had completed his experiments and was on his way back to his ship, Foster fell out of his canoe in the Chagres River and drowned. [Note 4] After Foster's death, the ship's command fell to Austin. He sailed Chanticleer across the Atlantic Ocean to Falmouth in 1831.

Chanticleer had originally been scheduled to make the second South America survey of 1831, but due to her exceedingly poor condition after her three-year voyage, the Admiralty sent Beagle instead. [17] Thus it was Beagle, and not Chanticleer, that became the ship upon which Charles Darwin established his reputation as a naturalist.

Instead of sending Chanticleer to South America, the Navy lent her to the Royal Sailing Society, Thames. That assignment lasted from 1831 to 1832. [10]

In 1832, Dr John Frost obtained an Admiralty grant to establish Chanticleer as a hospital ship to be moored off Millbank to serve as a refuge for Thames boatmen. However, Frost overextended himself and the plan fell through. [18]

The Cherokee class was a class of brig-sloops of the Royal Navy, mounting ten guns. Brig-sloops were sloops-of-war with two masts rather than the three masts of ship sloops. Orders for 115 vessels were placed, including five which were cancelled and six for which the orders were replaced by ones for equivalent steam-powered paddle vessels.

HMS Oberon was a 16-gun brig-sloop of the Seagull class built at Kingston upon Hull and launched in 1805. She was constructed at the James Shepheard Shipyard, Sutton.

HMS Cornwallis was a Royal Navy 54-gun fourth rate. Jemsatjee Bomanjee built the Marquis Cornwallis of teak for the Honourable East India Company (EIC) between 1800 and 1801. In March 1805 Admiral Sir Edward Pellew purchased her from the Company shortly after she returned from a voyage to Britain. She served in the Far East, sailing to Australia and the Pacific Coast of South America before returning to India. In February 1811 the Admiralty renamed her HMS Akbar. She captured forts and vessels in the Celebes and Amboyna, and participated in the invasion of Isle de France, and the 1811 invasion of Java. She also served in the West Indies before being laid up at Portsmouth in December 1816. She then stayed in Britain in a number of stationary medical and training capacities until the Admiralty sold her in the 1860s.

HMS Eclipse was a Royal Navy Cruizer-class brig-sloop built by John King at Dover and launched in 1807. She served off Portugal and then in the Indian Ocean at the capture of the Île de France. Shortly thereafter she captured Tamatave. She was sold for mercantile service in 1815. She traded with India until 1823. Then between 1823 and 1845 she made seven voyages as a whaler.

HMS Recruit was an 18-gun Cruizer-class brig-sloop of the Royal Navy, launched in 1806 at Sandwich, Kent. She is best known for an act of pique by Commander Warwick Lake, who marooned a seaman, and for an inconclusive but hard-fought ship action under Commander Charles John Napier against the French corvette Diligente. She captured a number of American vessels as prizes during the War of 1812 before being laid up in 1815 and sold for breaking up in 1822.

HMS Olympia was an Adonis-class schooner of the Royal Navy during the Napoleonic War. She was built at Bermuda using Bermudan cedar and completed in 1806. In March 1811 the French captured her, but the British recaptured her in October. During her career, she served as far afield as Buenos Aires, Île Bourbon, and Cape of Good Hope. The Admiralty sold her in 1815. 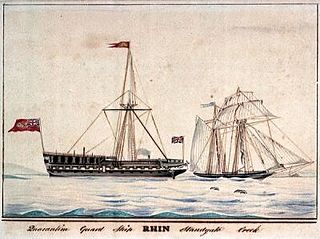 Rhin was a 40-gun Virginie-class frigate of the French Navy launched in 1802. She was present at two major battles while in French service. The Royal Navy captured her in 1806. Thereafter Rhin served until 1815 capturing numerous vessels. After the end of the Napoleonic Wars she was laid up and then served as a hospital for many years. She was finally broken up in 1884.

HMS Beagle was an 18-gun Cruizer-class brig-sloop of the Royal Navy. She was launched in 1804, during the Napoleonic Wars. She played a major role in the Battle of the Basque Roads. Beagle was laid up in ordinary in 1813 and sold in 1814.

HMS Colibri was the French naval Curieux-class brig Colibri, launched in 1808, that the British captured in 1809 and took into the Royal Navy under her existing name. She spent her time in British service on the North American station based in Halifax, Nova Scotia. During the War of 1812, Colibri served mostly in blockading the American coast and capturing privateers and merchant ships. She foundered in 1813 in Port Royal Sound, South Carolina, but without loss of life.

HMS Scylla was an 18-gun Cruizer-class brig-sloop of the Royal Navy. The first to bear the name Scylla, she was launched in 1809 and broken up in 1846.

HMS Swallow was a Cruizer-class brig-sloop launched in December 1805, nine months late. She served the Royal Navy through the Napoleonic Wars, capturing numerous privateers. After the end of the wars she was broken up in 1815.

HMS Canso was the American letter of marque schooner Lottery, launched in 1811, which a British squadron captured in 1813. The Royal Navy took Lottery into service as HMS Canso and she served during the War of 1812 and briefly thereafter. The navy sold her in 1816.

HMS Moselle was a Cruizer-class brig-sloop of the Royal Navy, launched in 1804. She served during the Napoleonic Wars in the Mediterranean, the Caribbean, and the North American station. She was sold in 1815.

HMS Rover was a Royal Navy Cruizer-class brig-sloop laid down in 1804 but not launched until 1808. She served in the North Sea, off the north coast of Spain, in the Channel, and on the North American station. She captured two letters-of-marque and numerous merchant vessels before being laid-up in 1815. She then sat unused until she was sold in 1828.

HMS Childers was a Royal Navy 18-gun Cruizer-class brig-sloop, built by Nicholas Diddams at Portsmouth Dockyard and launched in 1812. She was broken up in 1822.

HMS Podargus was a Crocus-class brig-sloop of the Royal Navy. She participated in one major battle during the Gunboat War between Britain and Denmark. After the war she served at Saint Helena for five or six years. On her return to Britain in 1820 she was laid up; she was finally sold in 1833.

HMS Gleaner was the mercantile ketch Gleaner, launched in 1802. She served the Royal Navy as the "hired ketch Gleaner" from 12 July 1808 until the Navy purchased her in 1809. Initially she served as a light vessel and survey vessel. From early 1811 to August 1811 she served in the Mediterranean, where she captured an Ottoman vessel. She then became a yard lighter and a light vessel again. Then in 1812 she was on the North American station where she participated in the capture of several merchant vessels. Next she returned to the Mediterranean where she captured a privateer. Finally, she served off the north coast of Spain where she was wrecked on 2 March 1814.

HMS Snake was launched in 1797 as the only member of her class of brig-sloops. She captured or destroyed two French privateers and one Danish privateer. She also captured numerous small merchantmen, but spent time escorting convoys to and from the West Indies. She was sold in 1816.

Milan was a French brig built at Saint Malo, from plans designed by François Pestel that had already served for Curieux in 1800 and for Palinure in 1804. She served in the French Navy for four years before HMS Surveillante and Seine captured her. She became HMS Achates in the Royal Navy and served until after the end of the Napoleonic Wars.

HMS Barbadoes was a 16-gun vessel, the American Herald, captured in 1813. The Royal Navy took her into service as HMS Barbadoes She captured a number of merchantmen and privateers before she was paid-off in May 1816. In 1814–1815 she also captured three Spanish and French vessels carrying over 1100 slaves. Barbadoes became a powder ship in Jamaica that was later wrecked with her remains being sold.