HMS Mohawk was purchased by Horatio Nelson Lay, Inspector General of the Qing Dynasty Chinese Maritime Customs Service, on 20 September 1862, as part of an effort to bolster the Qing Dynasty naval force in response to the ongoing Taiping Rebellion. [1] [2] Thereafter she was renamed Pei King (also as Pekin, Chinese :北京; pinyin :Běijīng; lit. ' Beijing '), and became part of the Lay-Osborn Flotilla commanded by Sherard Osborn. [1] She was put under the command of Hugh Burgoyne. [3] Upon her arrival in China, the Qing government ordered the ship to be renamed as Chin T'ai (Chinese :金台; pinyin :Jīntái). [1] [4]

Disagreements between the Qing government and Lay over the command of the Lay-Osborn Flotilla led to its disbandment in 1863, and Pekin returned to the United Kingdom. She was originally intended for sale, but an embargo on sales, due to the concurrent American Civil War and fear of the vessel joining the Confederate States Navy, prevented any sales. [5] When the American Civil War ended in 1865, she, along with China and Tientsin , were sold in an auction to Egypt on 30 December 1865 for £20,500. [1] [4] 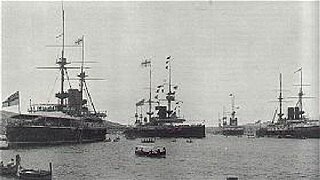 Kasuga Maru was a Japanese wooden paddle steamer warship of the Bakumatsu and early Meiji period, serving with the navy of Satsuma Domain, and later with the Imperial Japanese Navy. She was originally named Keangsoo, and was a wooden dispatch vessel built for the Imperial Chinese Navy. She was constructed in 1862 by Whites at Cowes, she formed part of the Lay-Osborn Flotilla during the Taiping Rebellion.

Sherard Osborn was a Royal Navy admiral and Arctic explorer.

HMS Hydra was the lead ship of her class of wooden steam paddle sloops of the British Royal Navy, launched in 1838 at Chatham Dockyard. After taking part in operations during Syrian War in 1840, she then served on anti-slavery operations and also as a survey vessel. She was scrapped in 1870.

Heien, originally known as Pingyuan, built by the Mawei Navy Yard near Foochow (Fuzhou), was an ironclad coastal battleship serving with the Imperial Chinese Beiyang Fleet and later the Imperial Japanese Navy. Previous transliterations of its Chinese name include Ping Yuen and Ping Yuan, also of its Japanese name Heiyen.

USS Tulip was a 183-ton steamer acquired by the Union Navy during the American Civil War.

USS Fuchsia was a steamer acquired by the Union Navy during the American Civil War. She was used by the Navy to patrol navigable waterways of the Confederacy to prevent the South from trading with other countries.

HMS Arrogant was an early wood screw frigate of the Royal Navy, launched in 1848 and sold in 1867. During the period of 1848–1850 she was commanded by Captain Robert FitzRoy.

The Commander-in-Chief, East Indies and China was a formation of the Royal Navy from 1831 to 1865. Its naval area of responsibility was the Indian Ocean and the coasts of China and its navigable rivers.

The flag of the Qing dynasty was an emblem adopted in the late 19th century featuring the Azure Dragon on a plain yellow field with the red flaming pearl in the upper left corner. It became the first national flag of China and is usually referred to as the "Yellow Dragon Flag".

Confucius was an early armed riverboat of the Qing dynasty, and one of the earliest modern vessels of China.

Hyson is an early gunboat of the Qing dynasty.

HMS Africa was a Victorian screw sloop launched in 1862 and sold to China later that year.

Tientsin was a British-made dispatch boat launched in 1863.

Kwangtung was a British-made dispatch boat launched in 1863.

HMS Jasper was a British Algerine-class gunboat launched in 1857.

Chang Feng-class destroyer was a class of Chinese destroyer bought from Germany during the naval reconstruction at the end of the Qing dynasty. However, the 1911 Revolution had already broken out before the ships were launched, and they were inherited by the Republic of China when the ships were completed.

Fei Lung was an early gunboat of the Qing Dynasty.