Sri Lanka, formerly known as Ceylon and officially the Democratic Socialist Republic of Sri Lanka, is an island country in South Asia. It lies in the Indian Ocean, southwest of the Bay of Bengal, and southeast of the Arabian Sea; it is separated from the Indian subcontinent by the Gulf of Mannar and the Palk Strait. Sri Lanka shares a maritime border with India and the Maldives. Sri Jayawardenepura Kotte is its legislative capital, and Colombo is its largest city and financial centre.

The history of Sri Lanka is intertwined with the history of the broader Indian subcontinent and the surrounding regions, comprising the areas of South Asia, Southeast Asia and Indian Ocean.

Sinhalese people are an Indo-Aryan ethnic group native to the island of Sri Lanka. They were historically known as Hela people. They constitute about 75% of the Sri Lankan population and number more than 16.2 million. The Sinhalese identity is based on language, cultural heritage and nationality. The Sinhalese people speak Sinhala, an insular Indo-Aryan language, and are predominantly Theravada Buddhists, although a minority of Sinhalese follow branches of Christianity and other religions. Since 1815, they were broadly divided into two respective groups: The 'Up-country Sinhalese' in the central mountainous regions, and the 'Low-country Sinhalese' in the coastal regions; although both groups speak the same language, they are distinguished as they observe different cultural customs.

Colombo is the commercial capital and largest city of Sri Lanka by population. According to the Brookings Institution, Colombo metropolitan area has a population of 5.6 million, and 752,993 in the Municipality. It is the financial centre of the island and a tourist destination. It is located on the west coast of the island and adjacent to the Greater Colombo area which includes Sri Jayawardenepura Kotte, the legislative capital of Sri Lanka, and Dehiwala-Mount Lavinia. Colombo is often referred to as the capital since Sri Jayawardenepura Kotte is itself within the urban/suburban area of Colombo. It is also the administrative capital of the Western Province and the district capital of Colombo District. Colombo is a busy and vibrant city with a mixture of modern life, colonial buildings and monuments.

Foreign relations of Sri Lanka refers to the diplomatic and commercial relations between Sri Lanka and other countries. Sri Lanka has stressed its principle of "friendship towards all, enmity towards none" in its diplomacy. 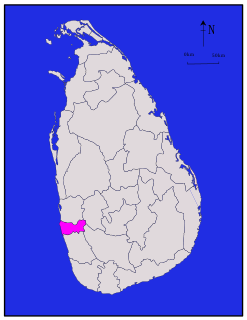 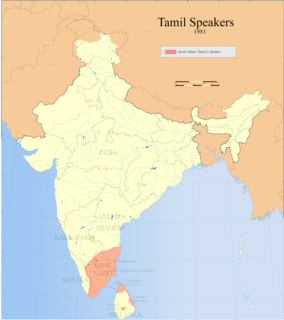 Sri Lankan Tamils, also known as Ceylon Tamils or Eelam Tamils, are Tamils native to the South Asian island state of Sri Lanka. Today, they constitute a majority in the Northern Province, live in significant numbers in the Eastern Province and are in the minority throughout the rest of the country. 70% of Sri Lankan Tamils in Sri Lanka live in the Northern and Eastern provinces.

Samuel James Veluppillai Chelvanayakam was a Ceylon Tamil lawyer, politician and Member of Parliament. He was the founder and leader of the Illankai Tamil Arasu Kachchi (ITAK) and Tamil United Liberation Front (TULF) and a political leader of the Ceylon Tamil community for more than two decades. Chelvanayakam has been described as a father figure to Ceylon's Tamils, to whom he was known as "Thanthai Chelva". 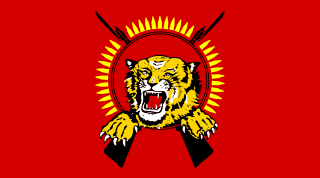 Tamil Eelam is a proposed independent state that many Tamils in Sri Lanka and the Sri Lankan Tamil diaspora aspire to create in the north and east of Sri Lanka. The name is derived from the ancient Tamil name for Sri Lanka, Eelam. Tamil Eelam, although encompassing the traditional homelands of Sri Lankan Tamils, does not have official status or recognition by world states. Large sections of the North-East were under de facto control of the Liberation Tigers of Tamil Eelam (LTTE) for most of the 1990s–2000s during the Sri Lankan Civil War.

Ceylon was the British Crown colony of present-day Sri Lanka between 1796 and 4 February 1948. Initially, the area it covered did not include the Kingdom of Kandy, which was a protectorate, but from 1817 to 1948 the British possessions included the whole island of Ceylon, now the nation of Sri Lanka.

Sri Lanka Law College, formerly known as Ceylon Law College, is a law college, and the only legal institution where one can enroll as a attorney-at-law in Sri Lanka. It was established in 1874, under the then Council of Legal Education, in order to impart a formal legal education to those who wished to become advocates and proctors in Ceylon. The main building of the college was constructed in 1911. It is located on Hulftsdorp Street in Colombo, Sri Lanka. As of late 2021, the current principal is Dr. Athula Pathinayake.

Sir Edwin Aloysius Perera Wijeyeratne, known as Edwin Wijeyeratne, was a Sri Lankan lawyer, politician, diplomat, and one of the founding members of the Ceylon National Congress and the United National Party. He was a Senator and Minister of Home Affairs and Rural Development in the cabinet of D. S. Senanayake. He thereafter he served as Ceylonese High Commissioner to the United Kingdom and Ceylonese High Commissioner to India

British Sri Lankans are a demographic construct that contains people who can trace their ancestry to Sri Lanka. It can refer to a variety of ethnicities and races, including Sinhalese, Tamils, Moors/Muslims and Burghers.

Achchige Patali Champika Ranawaka is a Sri Lankan electrical engineer and a Far-right politician. He is the Member of Parliament from Colombo District of Samagi Jana Balawegaya. He was the Cabinet Minister of Megapolis and Western Development, as well as Minister of Environment and Natural Resources, Power and Energy and Technology, Research and Atomic Energy.

Bodu Bala Sena, is a Sinhalese Buddhist nationalist and extreme nationalist organisation, which is a break-away organisation from the right-wing nationalist Jathika Hela Urumaya organisation. The BBS generally opposes pluralist and democratic ideologies, and criticizes non-extremist Buddhist monks for not taking action against the rise of Western religions within Sri Lanka. 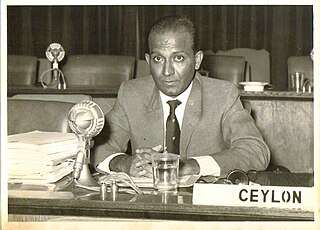 Arambamoorthy Thedchana Moorthy was a Sri Lankan Tamil diplomat and High Commissioner to the United Kingdom.