Hong Kong University Press is the university press of the University of Hong Kong. It was established in 1956 and publishes more than 50 titles per year in both Chinese and English. Most works in English are on cultural studies, film and media studies, Chinese history and culture.

Hong Kong University Press was established in 1956. At the beginning of the establishment, the Press mainly published several books on studies done by the University’s own faculty every year. It now releases between 30 and 60 new titles a year. All HKUP publications are approved by a committee of HKU faculty and staff, which bases its decisions on the results of a rigorous peer-review process. HKUP publishes most of its books (especially the academic books) in English and also brings out a lot of titles in Chinese. Also, since the first publication, HKUP has used a bilingual (Chinese and English) publication program. 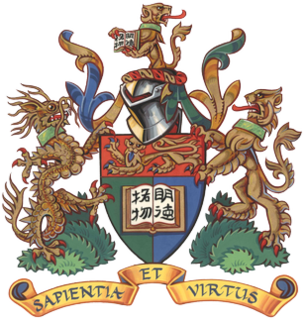 The University of Hong Kong is a public research university in Hong Kong. Founded in 1911, its origins trace back to the Hong Kong College of Medicine for Chinese, which was founded in 1887. It is the oldest tertiary institution in Hong Kong. HKU was also the first university established by the British in East Asia.

The Chinese University of Hong Kong is a public research university in Shatin, Hong Kong, formally established in 1963 by a charter granted by the Legislative Council of Hong Kong. It is the territory's second-oldest university and was founded as a federation of three existing colleges – Chung Chi College, New Asia College and United College – the oldest of which was founded in 1949.

The Hong Kong Commercial Daily (HKCD) is a Chinese state-owned newspaper, published in broadsheet format in Hong Kong and dubbed “China’s international media window” by the central government. Established in 1952, it was the first financial newspaper in the Chinese language. It is one of the few newspapers authorized by the Hong Kong SAR government to publicize legal announcements, and also the only Hong Kong newspaper allowed to be circulated freely in mainland China. It is controlled by the Hong Kong Liaison Office and has a branch office in Shenzhen.

The Hong Kong University Students' Union is the officially recognised undergraduate students' association of the University of Hong Kong. It was founded in 1912, and is currently a registered society under the Societies Ordinance.

The Postgraduate Certificate in Laws is an intensive one-year full-time professional legal qualification programme in Hong Kong. It allows graduates to proceed to legal training before qualifying to practice as either a barrister or a solicitor in Hong Kong. The "LL." of the abbreviation for the certificate is from the genitive plural legum. The programme can be seen as the equivalent of the Legal Practice Course (LPC) or the Bar Professional Training Course (BPTC) in England and Wales, or the Certificate in Legal Practice (Malaysia) (CLP) in Malaysia which focuses heavily on practical and procedural issues in legal practice, unlike a first degree in law.

Sir James Haldane Stewart Lockhart, was a British colonial official in Hong Kong and China for more than 40 years. He also served as Commissioner of British Weihaiwei from 1902 to 1921. Additionally, he was a Sinologist who made pioneering translations.

Larry Feign is an American cartoonist and writer based in Hong Kong, best known for his comic strip The World of Lily Wong. He attended the University of California, Berkeley and Goddard College in Plainfield, Vermont, graduating with a B.A. in 1979, and received an MFA in Creative Writing from Pacific University in Forest Grove, Oregon in 2012.

Buddhism is a major religion in Hong Kong and has been greatly influential in the traditional culture of its populace. Among the most prominent Buddhist temples in the city there are the Chi Lin Nunnery in Diamond Hill, built in the Tang Dynasty's architectural style; the Po Lin Monastery on Lantau Island, famous for the outdoor bronze statue, Tian Tan Buddha, which attracts a large number of visitors during the weekends and holidays.

Muse (瞄) is a bilingual Hong Kong-based multimedia publisher specialising in content related to the art and culture scene of Hong Kong and greater China. Muse now concentrates on digital media, books, and specialised publishing projects, and is a developer for both Amazon.com's Kindle Store and Apple's iBookstore, Muse also maintains its own online bookstore.

Johannes Chan Man-mun (陳文敏) SC (Hon) is Chair Professor of Law and former Dean of the Faculty of Law (2002-2014) at the University of Hong Kong. He specialises in human rights, constitutional and administrative law, and is the first and only academic silk ever appointed in Hong Kong. He is credited with transforming the University's Faculty of Law into one of the leading law schools in the world during his tenure as Dean.

The University of Hong Kong Faculty of Law is one of the 11 faculties and schools at the University of Hong Kong. Founded in 1969 as the Department of Law, it is the oldest law school in Hong Kong. HKU Law is consistently ranked among the top law schools in the world. In 2019, HKU Law was ranked 18th on the QS World Rankings and 22nd on the Times Higher Education World Rankings. 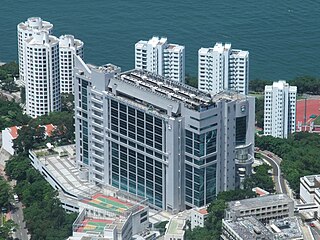 The Li Ka Shing Faculty of Medicine of the University of Hong Kong is a medical faculty which comprises several schools and departments that provide an array of tertiary programmes in medicine, nursing, pharmacy and chinese medicine. English is the medium of instruction in all of the classes while Chinese is also retained for the teaching of chinese medicine. It is located several kilometres away from the main campus of the university and is near the Queen Mary Hospital which is its main teaching facility and research base. Founded in 1887, it is also one of the oldest western medical schools in the Far East. 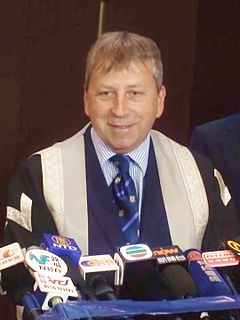 Royal Asiatic Society Hong Kong Branch is an organisation to encourage interest in Asia with emphasis in Hong Kong. The society was founded in 1847, but ceased to exist at the end of 1859. Exactly a century later, on December 28, 1959, it was reborn with the approval of the parent society in London the Royal Asiatic Society of Great Britain and Ireland.

The University of Hong Kong pro-vice-chancellor selection controversy surrounded alleged political interference behind the University of Hong Kong governing council's rejection of Johannes Chan's recommended appointment to the post of pro-vice-chancellor in charge of staffing and resources. Chan, dean of the Faculty of Law from 2002 until 2014, was unanimously recommended for the post by a selection committee headed by university president Peter Mathieson. The governing council's decision, the first time that a candidate selected by the committee was rejected, was widely viewed as political retaliation for Chan's involvement with pro-democratic figures including his former subordinate Benny Tai. A majority of HKU Council members are not students or staff of the university, and many are directly appointed by the chief executive of Hong Kong. The decision received international condemnation, and was viewed as part of a Beijing-backed curtailing of academic freedoms that would damage Hong Kong's academic reputation.

Professor Fanny Mui-ching Cheung is a Hong Kong psychologist. She is a professor of psychology and co-director of the Hong Kong Institute of Asia-Pacific Studies at the Chinese University of Hong Kong (CUHK). She researchers, publishes, and advocates on topics related to mental health and gender equality.

David James Clarke is professor of modern and contemporary art at the University of Hong Kong. He was born in Somerset, England, earned his PhD in art history from the Courtauld Institute of Art, University of London, in 1983. He specialises in the history of Chinese and Hong Kong art and is a practicing fine art photographer.