The Yale romanization of Cantonese was developed by Gerard P. Kok for his and Parker Po-fei Huang's textbook Speak Cantonese initially circulated in looseleaf form in 1952 [1] but later published in 1958. [2] Unlike the Yale romanization of Mandarin, it is still widely used in books and dictionaries, especially for foreign learners of Cantonese. It shares some similarities with Hanyu Pinyin in that unvoiced, unaspirated consonants are represented by letters traditionally used in English and most other European languages to represent voiced sounds. For example, [p] is represented as b in Yale, whereas its aspirated counterpart, [pʰ] is represented as p. [3] Students attending The Chinese University of Hong Kong's New-Asia Yale-in-China Chinese Language Center are taught using Yale romanization. [4]

Despite originally being a romanisation scheme to indicate pronunciations, some enthusiasts actually employ the Yale romanisation to explore writing Cantonese as an alphabetic language, elevating it from its assistive status to a written language in effect.

Modern Cantonese has up to seven phonemic tones. Cantonese Yale represents these tones using a combination of diacritics and the letter h. [5] [6] Traditional Chinese linguistics treats the tones in syllables ending with a stop consonant as separate "entering tones". Cantonese Yale follows modern linguistic conventions in treating these the same as the high-flat, mid-flat and low-flat tones, respectively.

Sample transcription of one of the 300 Tang Poems by Meng Haoran:

Hanyu Pinyin, very often shortened to just pinyin, is the official romanization system for Standard Mandarin Chinese in mainland China and, to some extent, in Taiwan and Singapore. It is often used to teach Mandarin, which is normally written using Chinese characters, to learners who already know the Latin alphabet. The system includes four diacritics denoting tones, but pinyin without tone marks is used to spell Chinese names and words in languages written in the Latin script, and is also used in certain computer input methods to enter Chinese characters. The word Hànyǔ means 'the spoken language of the Han people', while Pīnyīn (拼音) literally means 'spelled sounds'.

Hakka Chinese is a language group of varieties of Chinese, spoken natively by the Hakka people throughout Southern China and Taiwan and throughout the diaspora areas of East Asia, Southeast Asia and in overseas Chinese communities around the world. 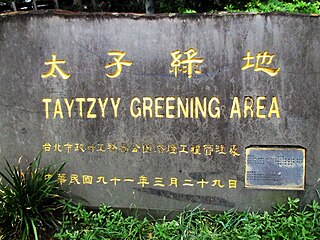 Gwoyeu Romatzyh, abbreviated GR, is a system for writing Mandarin Chinese in the Latin alphabet. The system was conceived by Yuen Ren Chao and developed by a group of linguists including Chao and Lin Yutang from 1925 to 1926. Chao himself later published influential works in linguistics using GR. In addition a small number of other textbooks and dictionaries in GR were published in Hong Kong and overseas from 1942 to 2000. 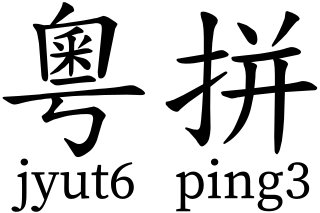 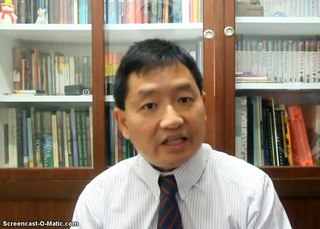 Penang Hokkien is a local variant of Hokkien spoken in Penang, Malaysia. It is spoken as a mother tongue by 63.9% of Penang's Chinese community, and also by some Penangite Indians and Penangite Malays.

Teochew is a dialect of Chaoshan Min, a Southern Min language, that is spoken by the Teochew people in the Chaoshan region of eastern Guangdong and by their diaspora around the world. It is sometimes referred to as Chiuchow, its Cantonese rendering, due to the English romanisation by colonial officials and explorers. It is closely related to some dialects of Hokkien, as it shares some cognates and phonology with Hokkien. The two are mutually unintelligible, but it is possible to understand some words.

Wong Shik Ling published a scheme of phonetic symbols for Cantonese based on the International Phonetic Alphabet (IPA) in the book A Chinese Syllabary Pronounced According to the Dialect of Canton. The scheme has been widely used in Chinese dictionaries published in Hong Kong. The scheme, known as S. L. Wong system (黃錫凌式), is a broad phonemic transcription system based on IPA and its analysis of Cantonese phonemes is grounded in the theories of Y. R. Chao.

Bopomofo, or Mandarin Phonetic Symbols, also named Zhuyin, is a Chinese transliteration system for Mandarin Chinese and other related languages and dialects. More commonly used in Taiwanese Mandarin, it may also be used to transcribe other varieties of Chinese, particularly other varieties of Mandarin Chinese dialects, as well as Taiwanese Hokkien. Consisting of 37 characters and five tone marks, it transcribes all possible sounds in Mandarin.

The Cantonese Romanisation system known as Barnett–Chao is based on the principles of the Gwoyeu Romatzyh system (GR) developed by Chao Yuenren in the 1920s, which he modified in 1947. The B-C system is a modification in 1950 by K M A Barnett which was adopted by the School of Oriental and African Studies, London (SOAS).

The different varieties of Chinese have been transcribed into many other writing systems.

The Fuqing dialect, or Hokchia, is an Eastern Min dialect. It is spoken in the county-level city of Fuqing, China, situated within the prefecture-level city of Fuzhou. It is not completely mutually intelligible with the Fuzhou dialect.

The Yale romanization of Mandarin is a system for transcribing the sounds of Standard Chinese, based on Mandarin Chinese varieties spoken in and around Beijing. It was devised in 1943 by the Yale sinologist George Kennedy for a course teaching Chinese to American soldiers, and popularized by continued development of that course at Yale. The system approximated Chinese sounds using English spelling conventions in order to accelerate acquisition of pronunciation by English speakers.