The name Jyutping (itself the Jyutping romanisation of its Chinese name, 粵拼) is a contraction consisting of the first Chinese characters of the terms Jyut6jyu5 ( 粵語 , meaning "Yue language") and ping3jam1 ( 拼音 "phonetic alphabet", also pronounced as "pinyin" in Mandarin).

Despite being intended as a system to indicate pronunciation, it has also been employed writing Cantonese as an alphabetic language—in effect, elevating it from its assistive status to a written language.

The Jyutping system [1] departs from all previous Cantonese romanisation systems (approximately 12, including Robert Morrison's pioneering work of 1828, and the widely used Standard Romanization, Yale and Sidney Lau systems) by introducing z and c initials and the use of eo and oe in finals, as well as replacing the initial y, used in all previous systems, with j. [2]

In 2018, it was updated to include the -a and -oet finals, to reflect syllables recognized as part of Cantonese phonology in 1997 by the Jyutping Work Group of the Linguistic Society of Hong Kong. [3]

There are nine tones in six distinct tone contours in Cantonese. However, as three of the nine are entering tones (Chinese :入聲; Jyutping :jap6sing1), which only appear in syllables ending with p, t, and k, they do not have separate tone numbers in Jyutping (though they do in Cantonese Pinyin; these are shown in parentheses in the table below). A mnemonic which some use to remember this is 「風水到時我哋必發達」or “Feng Shui [dictates that] we will be lucky.”

Jyutping and the Yale Romanisation of Cantonese represent Cantonese pronunciations with the same letters in:

But they differ in the following:

Jyutping and Cantonese Pinyin represent Cantonese pronunciations with the same letters in:

But they have some differences:

Sample transcription of one of the 300 Tang Poems:

The Jyutping method (Chinese :粵拼輸入法) refers to a family of input methods based on the Jyutping romanization system.

Chinese input methods are methods that allow a computer user to input Chinese characters. Most, if not all, Chinese input methods fall into one of two categories: phonetic readings or root shapes. Methods under the phonetic category usually are easier to learn but are less efficient, thus resulting in slower typing speeds because they typically require users to choose from a list of phonetically similar characters for input, whereas methods under the root shape category allow very precise and speedy input but have a steep learning curve because they often require a thorough understanding of a character's strokes and composition. 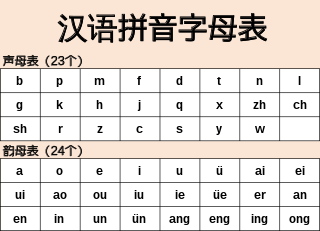 Hanyu Pinyin, often shortened to just pinyin, is the official romanization system for Standard Mandarin Chinese in China, and to some extent, in Singapore and Malaysia. It is often used to teach Mandarin, normally written in Chinese form, to learners already familiar with the Latin alphabet. The system includes four diacritics denoting tones, but pinyin without tone marks is used to spell Chinese names and words in languages written in the Latin script, and is also used in certain computer input methods to enter Chinese characters. The word Hànyǔ literally means "Han language", while Pīnyīn (拼音) means "spelled sounds". 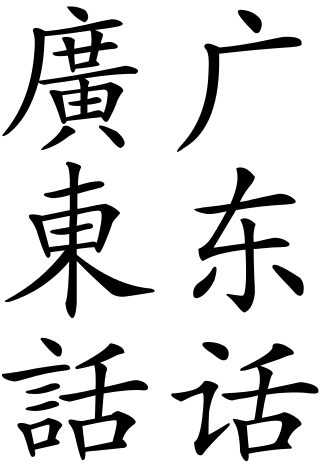 Cantonese is a language within the Chinese (Sinitic) branch of the Sino-Tibetan languages originating from the city of Guangzhou and its surrounding area in Southeastern China. It is the traditional prestige variety of the Yue Chinese dialect group, which has over 80 million native speakers. While the term Cantonese specifically refers to the prestige variety, it is often used to refer to the entire Yue subgroup of Chinese, including related but largely mutually unintelligible languages and dialects such as Taishanese.

Simplified Cangjie, known as Quick or Sucheng is a stroke based keyboard input method based on the Cangjie IME (倉頡輸入法) but simplified with select lists. Unlike full Cangjie, the user enters only the first and last keystrokes used in the Cangjie system, and then chooses the desired character from a list of candidate Chinese characters that pops up. This method is popular in Taiwan and Hong Kong, the latter in particular.

Starting in the 1980s, proper Cantonese pronunciation has been much promoted in Hong Kong, with the scholar Richard Ho (何文匯) as its iconic campaigner. The very idea of proper pronunciation of Cantonese Chinese is controversial, since the concept of labeling native speakers' usage and speech in terms of correctness is not generally supported by academic linguistics. Law et al. (2001) point out that the phrase 懶音 laan5 jam1 "lazy sounds," most commonly discussed in relation to phonetic changes in Hong Kong Cantonese, implies that the speaker is unwilling to put forth sufficient effort to articulate the standard pronunciation.

Wong Shik Ling published a scheme of phonetic symbols for Cantonese based on the International Phonetic Alphabet (IPA) in the book A Chinese Syllabary Pronounced According to the Dialect of Canton. The scheme has been widely used in Chinese dictionaries published in Hong Kong. The scheme, known as S. L. Wong system (黃錫凌式), is a broad phonemic transcription system based on IPA and its analysis of Cantonese phonemes is grounded in the theories of Y. R. Chao.

Wong Shik-Ling published a romanisation scheme accompanying a set of phonetic symbols for Cantonese based on International Phonetic Alphabet (IPA) in the book A Chinese Syllabary Pronounced according to the Dialect of Canton.

The Yale romanization of Cantonese was developed by Gerard P. Kok for his and Parker Po-fei Huang's textbook Speak Cantonese initially circulated in looseleaf form in 1952 but later published in 1958. Unlike the Yale romanization of Mandarin, it is still widely used in books and dictionaries, especially for foreign learners of Cantonese. It shares some similarities with Hanyu Pinyin in that unvoiced, unaspirated consonants are represented by letters traditionally used in English and most other European languages to represent voiced sounds. For example, is represented as b in Yale, whereas its aspirated counterpart, is represented as p. Students attending The Chinese University of Hong Kong's New-Asia Yale-in-China Chinese Language Center are taught using Yale romanization.

The official romanization system for Taiwanese Hokkien in Taiwan is locally referred to as Tâi-uân Lô-má-jī Phing-im Hong-àn or Taiwan Minnanyu Luomazi Pinyin Fang'an, often shortened to Tâi-lô. It is derived from Pe̍h-ōe-jī and since 2006 has been one of the phonetic notation systems officially promoted by Taiwan's Ministry of Education. The system is used in the MoE's Dictionary of Frequently-Used Taiwan Minnan. It is nearly identical to Pe̍h-ōe-jī, apart from: using ts tsh instead of ch chh, using u instead of o in vowel combinations such as oa and oe, using i instead of e in eng and ek, using oo instead of o͘, and using nn instead of ⁿ.

The Macau Government Cantonese Romanization refers to the mostly consistent system for romanizing Cantonese as employed by the Government of Macau and other non-governmental organizations based in Macau. The system has been employed by the Macau Government since the Portuguese colonial period and continues to be used after the 1999 handover of the territory. Similarly to its counterpart romanization system in Hong Kong, the method is not completely standardized and thus is not taught in schools, but rather employed by government agencies to accurately display the correct pronunciation of Cantonese in public signage and official usage.

Cantonese Bopomofo, or Cantonese Phonetic Symbols is an extended set of Bopomofo characters used to transcribe Yue Chinese and, specifically, its prestige Cantonese dialect. It was first introduced in early 1930s, and then standardized in 1950. It fell into disuse along with the original Bopomofo for Mandarin Chinese in the late 1950s.