Jaan Ehlvest (born 14 October 1962) is an Estonian-American chess player. He was awarded the title Grandmaster by FIDE in 1987. Ehlvest was Estonian champion in 1986. Since 2006, he has represented the United States.

In 2006, unsatisfied with the lack of support from the Estonian Chess Federation, Ehlvest decided to move to the United States; since then, he has been a member of the USCF and competed internationally for the US. [4]

In March 2007, Ehlvest accepted an invitation to play an eight-game match against the chess program Rybka, one of the strongest chess programs in existence. He was playing Black in all games, but was given pawn odds (Rybka was playing each game a pawn down; a different white pawn was removed in each game). He lost the match by 2½:5½ (+1−4=3). In a following rematch, the pawn odds were removed, Ehlvest was given White in every game, twice the time on the clock, and significant computational handicaps were placed on the machine. Ehlvest lost decisively, 1½:4½.

In 2008 he won the Pan American-Continental Championship, which took place in Boca Raton, Florida. [5] [6]

Ehlvest studied psychology at Tartu State University (now, University of Tartu). In 2004, Ehlvest published his autobiography, The Story of a Chess Player.

Paul Keres was an Estonian chess player and writer. He was among the world's top players from the mid-1930s to the mid-1960s and in 1950, was awarded the title of International Grandmaster by FIDE on its inaugural list.

Handicaps in chess are variant ways to enable a weaker player to have a chance of winning against a stronger one. There are a variety of such handicaps, such as material odds, extra moves, extra time on the chess clock, and special conditions. Various permutations of these, such as "pawn and two moves", are also possible. 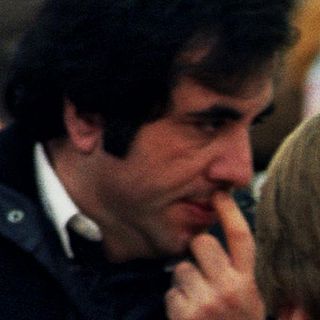 Roman Yakovlevich Dzindzichashvili is a Soviet-born American chess player. He was awarded the title Grandmaster by FIDE in 1977.

Gregory Serper is a Grandmaster of chess.

Leonid Yudasin is a Soviet-born Israeli chess player and trainer. He was awarded the title of Grandmaster by FIDE in 1990. Yudasin was part of the USSR team that won the gold medal in the 1990 Chess Olympiad. He competed in the Candidates Tournament for the World Chess Championship twice, in 1991 and 1994.

Mikhail Gurevich is a Soviet-born Belgian chess player. He was a top ten ranked player from 1989 to 1991. Gurevich became an International Grandmaster in 1986, and is currently an FIDE arbiter and senior trainer. 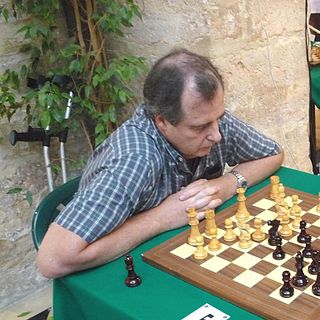 Alon Greenfeld is an Israeli chess grandmaster and trainer.

Below is a list of events in chess in 1994, as well as the top ten FIDE rated chess players of that year.

Kalle Kiik is an Estonian chess player, who won the Estonian Chess Championship. He was awarded the International Master title in 1993. 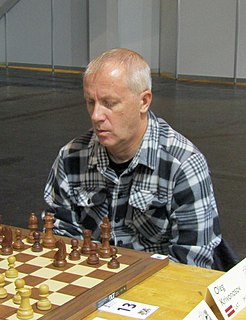 Oleg Valerevich Krivonosov is a Soviet/Latvian chess player. He was awarded the International Master title in 1993.

Gennadij Timoscenko, is a Russian and Slovak chess Grandmaster (GM) (1980).