Born in Toronto, she studied literature at universities in England and France, and currently teaches literature and theatre in the graduate studies department at the University of Guelph.

Of Ukrainian heritage, Kulyk Keefer often writes about the experiences of first-generation Canadian children of immigrants. Her sister is the Canadian artist, Karen Kulyk. 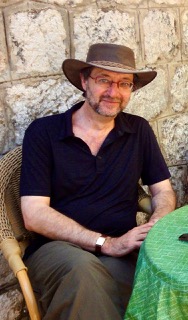 Guy Gavriel Kay is a Canadian writer of fantasy fiction. The majority of his novels take place in fictional settings that resemble real places during real historical periods, such as Constantinople during the reign of Justinian I or Spain during the time of El Cid. Kay has expressed a preference to avoid genre categorization of these works as historical fantasy. As of 2019, Kay has published 14 novels and a book of poetry. As of 2018, his fiction has been translated into more than 30 languages.

Marilyn Bowering is a Canadian poet, novelist and playwright. As well as several adventure novels and many books of poetry, Bowering has also scripted a number of dramatic works and a libretto.

Thomas King is a Canadian writer and broadcast presenter who most often writes about North America's First Nations.

Audrey Grace Thomas, OC is a Canadian novelist and short story writer who lives on Galiano Island, British Columbia. Her stories often have feminist themes and include exotic settings. She is a recipient of the Marian Engel Award.

Allan Stratton is a Canadian playwright and novelist.

Douglas Burnet Smith is a Canadian poet. He is the author of fifteen volumes of poetry. His Voices from a Farther Room was nominated for the Governor General's Award, the most prestigious literary award in Canada. In addition to winning numerous poetry awards, in 1989 Mr. Smith won The Malahat Review’s Long Poem Prize. He has also represented Canada at international writers’ festivals and has served as the President of the League of Canadian Poets and as Chair of the Public Lending Right Commission of Canada. His poetry has also been published in numerous literary periodicals and anthologies. He was twice a member of the Poetry Jury for the Canada Council for the Arts' Governor General's Literary Awards, in 1988 and again in 2011.

The Canadian Authors Association is Canada's oldest association for writers and authors. The organization has published several periodicals, organized local chapters and events for Canadian writers, and sponsors writing awards, including the Governor General's Awards.

Barbara Reid is a Canadian illustrator and author of children's books. She has been called "one of Canada's major literary figures".

"The Metaphor" is a short story by Budge Wilson. It was originally published in the October 1983 issue of Chatelaine magazine.