Janine Southby Brown is a retired New Zealand netball player who then coached the national Silver Ferns netball team. She was also the coach of the Southern Steel in the ANZ Championship. Southby played for the Western Flyers in the National Bank Cup competition from 1997–2001, before transferring to the Dunedin-based Otago Rebels in 2002. [1] In 2015, Southby was given the role as head coach for the New Zealand netball team the Silver Ferns. Southby had resigned on July 20th 2018 where the independent review found fault in Southby's coaching style. [2]

Southby retired from netball after the 2003 season and became the Rebels assistant coach for 2004 and 2005, working under Lois Muir.

In 2006 Southby was announced the new coach of the Rebels franchise, and held that position until the National Bank Cup made way for the new ANZ Championship in 2008.

Southby applied for the new coaching role of the Southern Steel, an amalgamation of the championship-winning Southern Sting and Rebels. She was unsuccessful, with Sting coach Robyn Broughton winning the position and opting to select former Silver Fern Donna Wilkins as her assistant.

Southby continued her coaching with the Otago provincial side from 2008, and was later announced as coach of the New Zealand under 21 squad in 2010. Southby coached the national under 21 side for four years, ending in September 2013 when her side won the World Youth Cup in Glasgow. She is the current coach of the national senior Fast5 team.

After a poor season in the ANZ Championship, the Southern Steel advertised the franchise's coaching role for the 2012 season. Broughton, who had held the role for the previous 14 seasons, decided against reapplying. On 20 May, Southby – along with former Australian international and Southland coach Natalie Avellino – were confirmed as the team's new co-coaches. [3]

After a franchise review by Steel chief executive David Bannister in late 2012, Southby was promoted to head coach for the 2013 season. Avellino was reverted to an assistant coaching role. Midway through the 2013 season, Avellino was controversially axed by the franchise after a reported fall out between the coaches. The franchise described the situation as "untenable" and that the coaching pair had "different coaching philosophies". [4]

Southby will return as coach for the Southern Steel in the 2014 season, with the rest of her management staff yet to be announced.

Appointed the role in November of 2015, Southby is a product of the Netball New Zealand High Performance Coach pathway, that assisted her leading the NZ U/21s team to gold at the World Youth Netball Cup, in 2013 against Australia in the final. [5]

As coach of the ferns she won her first game, with Katrina Grant as team captain against England Roses in the Netball Quad Series (NZL-65 -- ENG-39), at Vector Arena, in Auckland [6] In 2016, the ferns also won one of the four matches in the Constellation Cup annually played between, Australia, the second match the Ferns won by 2 points (53 to Australian Diamonds 51), they ended losing the cup to lose the next two matches.

In July 20th 2018, silver ferns coach Janine Southby had resigned in the wake of Netball New Zealand's independent review of the team's disastrous Commonwealth Games campaign, in which they did not even collect a medal. [7]

The Southern Sting were a netball team based in Invercargill, New Zealand that competed in the National Bank Cup competition, formerly known as the Coca-Cola Cup.

The Otago Rebels was a New Zealand netball team which represented Otago in the National Bank Cup. 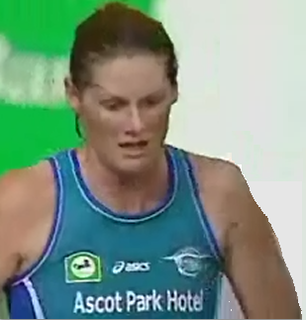 Donna Wilkins is a New Zealand representative in netball and basketball. She married Southland farmer Mike Wilkins on 17 March 2007. Wilkins returned to the Southern Steel for the 2012 season, after a short stint with the Canterbury Tactix in 2011.

Southern Steel are a New Zealand netball team based in Invercargill. Between 2008 and 2016, they played in the ANZ Championship. Since 2017 they have represented Netball South in the ANZ Premiership. Netball South is the governing body that represents Southland and Otago. In 2017 they won their first premiership when they were the inaugural ANZ Premiership winners. In 2018 they won their second premiership when they retained the title. In 2017 Steel were the inaugural winners of the Netball New Zealand Super Club tournament.

Jodi Anne Brown is a retired New Zealand netball player. Brown was a member of the New Zealand national netball team, the Silver Ferns from 2002 to 2015, taking time off in between those periods due to injury and pregnancy, earning 61 caps. She has also played elite domestic netball in New Zealand for 13 years, and has signed with the Southern Steel for 2014. She played for the Central Pulse in 2015 and was getting set to play her final season in 2016 before she injured her ACL in the preseason and decided to retire from domestic netball after she had retired from international netball in 2015. In 2015, Jodi began co-coaching at St Hilda's Collegiate, Dunedin with the year nine A team. She has since followed this team through the years, which included a devastating 1 point loss in the SISS final. In 2018, Brown coached the St Hilda's Senior A team and also coached the Dunedin U17 team to 11th place at Nationals.

Katrina Rore is a New Zealand international netball player. Rore is the current vice-captain of the New Zealand national netball team, the Silver Ferns, and plays for the Central Pulse in the ANZ Championship. Rore signed to the New South Wales swifts in the suncorp super netball league in the latter half of the 2018–2019 season following the netball World Cup.

Robyn Denise Broughton is a New Zealand netball coach. Broughton coached the Southern Sting from 1998 to 2007 during the National Bank Cup, winning seven titles in ten years. She was also an assistant coach for the New Zealand national netball team from 2000 to 2002, and is currently a national selector. From 2012 to 2015, Broughton coached the Central Pulse in the ANZ Championship, after four years with the Southern Steel and later coached the Hertfordshire Mavericks in the Netball Superleague.

Wendy Frew is a New Zealand netball player. Frew was a previous member of the champion Southern Sting in the National Bank Cup from 2002 until 2007. With the start of the ANZ Championship in 2008, she remained in Southland playing for the new Southern Steel franchise. 2018 will be Frew's fifth season as captain and her 16th representing the southern franchise, including its predecessor the Sting.

Natalie Ann Allison Avellino is a retired Australian netballer, and former assistant coach of the Southern Steel netball team in the ANZ Championship. She made the Australia national netball team from 1994–1995 and again from 2004-2006 which included key competitions like one world championships and one Commonwealth Games. She was an Australian Institute of Sport scholarship holder.

Margaret Mary Anne Foster is a New Zealand netball coach and former Silver Ferns player. Foster played 14 international matches from 1992 to 1997. She played domestic netball in the National Bank Cup for the Canterbury Flames, playing in 1998, 1999 and 2001. She also played for Canterbury for over ten years, and played one season for Wellington.

Yvette McCausland-Durie is a New Zealand netball coach and former netball player. As a player, she played for Western Flyers during the National Bank Cup era and represented New Zealand at under-21 level. She was a member of the New Zealand team that won the 1992 World Youth Netball Championships. As a head coach, McCausland-Durie guided Central Pulse to the 2019 and 2020 ANZ Premierships and the 2018 Super Club title. She has also worked with the senior New Zealand team as an assistant coach and with the under-21 team as a head coach. She was head coach when New Zealand won gold at the 2009 World Youth Netball Championships. McCausland-Durie is also a schoolteacher and educator. Together with her husband, she is a co-founder of the Manukura School based in Palmerston North. She is also a member of its board of trustees.

Courtney Tairi is a former New Zealand netball international. She also represented Australia at under-21 level. She was a member of the Australia team that won the 2009 World Youth Netball Championships. During the ANZ Championship era, Tairi played for New South Wales Swifts, Southern Steel and Waikato Bay of Plenty Magic. She finished her netball playing career with Northern Stars in the 2017 ANZ Premiership. Since retiring as a netball player, Tairi has worked a broadcaster, presenter and commentator for Sky Sport.

Sulu Tone-Fitzpatrick is a New Zealand netball and rugby sevens player. She plays for the Northern Mystics in the ANZ Championships. She can play the Goal Keeper, Goal Defence, and Wing Defence positions. She is of Samoan heritage.

Reinga Bloxham, also known as Reinga Te Huia, is a former New Zealand netball player and current coach. During the Coca-Cola Cup/National Bank Cup era, she played for Southern Sting. Since 2016, she has served as head coach of Southern Steel in the ANZ Premiership. In 2017 and 2018, Bloxham guided Steel to two successive ANZ Premiership titles.