The Southland Times is the regional daily paper for Southland, including Invercargill, and neighbouring parts of Otago, in New Zealand. 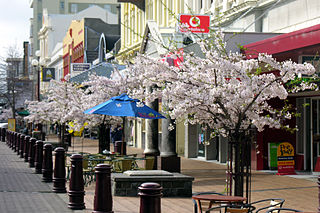 The Southland Times was first established in 1862. The first edition was published on 12 November 1862 under the title of Invercargill Times. The three founders were Gerard George Fitzgerald, John T. Downes, and Charles Reynolds. The name changed to The Southland Times in June 1864. [1] Initially, it was published two or three times a week until it became a daily paper in 1875. From 1869 until its purchase by the INL (Independent Newspapers Limited), it was owned by the Gilmour family. Robert Gilmour became a part owner in 1869–70, and then in 1879 became the sole owner of the paper.

Gerard George Fitzgerald was a 19th-century Member of Parliament in New Zealand. Like his brother James FitzGerald, he was a journalist of considerable ability, and co-founded The Southland Times in 1862. For the last 19 years of his life, he was editor of The Timaru Herald.

In 1972, digital computers and software, phototypesetters, and a Japanese APR photopolymer plate were installed at the paper, making the Times New Zealand's first fully computerised newspaper production system under the direction of Ian Gilmour.

The paper changed hands again on 1 July 2003, when Independent Newspapers Limited was purchased by Fairfax Media. [2]

In May 2012 local printing of The Southland Times ceased with all printing now taking place from Allied Press in Dunedin. Smaller community papers that are usually printed once a week are now printed from Christchurch. [3]

The Eye is distributed weekly in the area surrounding Invercargill and Winton.

Newslink is distributed weekly in the area surrounding Gore and Eastern Southland. [4]

The Mirror is published weekly on Wednesdays in two editions: one for the Queenstown Lakes District and another for Central Otago. [5]

The Clutha Leader is delivered on Thursday mornings to all homes in the Clutha district. [6]

The Otago Southland Farmer is delivered fortnightly to all rural homes in Southland and Otago. [7]

Auto Xtra is an A4 glossy car publication, published fortnightly on a Monday, inserted into The Southland Times, and distributed to retail outlets in Invercargill.

The Guelph Mercury was an English language daily newspaper published in Guelph, Ontario, Canada. It published a mix of community, national and international news and is owned by the Torstar Corporation. The newspaper, in many incarnations, was a part of the community since 1854. It was one of the oldest broadsheet newspapers in Ontario. Publication was discontinued in late January 2016. 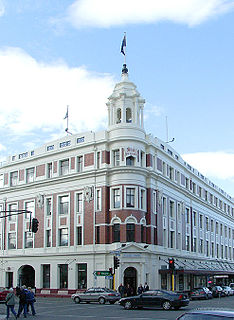 The Timaru Herald is a daily provincial newspaper serving the Timaru, South Canterbury and North Otago districts of New Zealand. The current audited daily circulation is about 14,500 copies, with a readership of about 31,000 people. The paper is owned and published by Fairfax New Zealand.

The News & Messenger was a daily newspaper that was published in Manassas, Virginia and was one of a number of competing local papers covering the Washington, D.C. suburbs and exurbs in the region. The paper was owned by Berkshire Hathaway's World Media Enterprises division, which also published the weekly Stafford County Sun.

James Walker Bain was a 19th-century New Zealand politician. He was a significant businessman in Invercargill and Southland.

The following lists events that happened during 1862 in New Zealand.

The Manawatū Standard is the daily paper for the Manawatu region based in Palmerston North with satellites in Feilding and Marton. The Manawatū Standard has been recognised as one of the best in New Zealand being a finalist in the 2008 Qantas Media Award for best regional daily newspaper; it won the same category in 2007. Won Best Headline and Student Journalist of the Year at the Qantas Media Awards 2017.

The Star is a free newspaper published weekly in Dunedin, New Zealand by Allied Press since 1979 as successor to The Evening Star, which was the city's daily evening newspaper from June 1863 to 1979.

Otautau is a small farming, forestry and milling town located inland on the western edge of the Southland Plains of New Zealand on the banks of the Aparima River. Otautau is located approximately 40 km north west of Invercargill. The average elevation of Otautau is 60 meters.

The Otago Witness was a prominent newspaper in the early years of the European settlement of New Zealand, produced in Dunedin, the provincial capital of Otago. It existed from 1851 to 1932, and was notable as the first paper to use photos.

Wiltshire Publications Ltd, publishes and prints three local newspapers in the West Country: Melksham Independent News, White Horse News and Frome Times. It is a family owned business and remains one of the few independent, locally owned newspaper groups in the country.

The Hillsboro Tribune is a weekly newspaper published on Wednesdays that covers the city of Hillsboro in the U.S. state of Oregon. Owned by the Pamplin Media Group, the newspaper published its first issue on September 7, 2012. It was Pamplin's first new paper since 2001, when the company started the Portland Tribune, and was designed to complement its other local papers in the Portland metropolitan area. The Tribune competed with the now defunct Hillsboro Argus, which is owned by Advance Publications, and which also publishes The Oregonian that competes with the Portland Tribune. John Schrag served as the first publisher, with Kevin Harden, Jim Redden, and Jennifer Anderson as the news team. Pamplin distributes the paper free at newsstands in the Hillsboro and Aloha areas, as well as via home delivery with a paid subscription. The weekly paper changed its publication day from Fridays to Wednesdays in February 2018.

The Murray Valley Standard is a bi-weekly newspaper published in Murray Bridge, South Australia, first founded in late 1934 and published continuously since then. It is owned by Australian Community Media and its main office is on Adelaide Road, Murray Bridge.