The Taranaki Herald was an afternoon daily newspaper, published in New Plymouth, New Zealand. It began publishing as a four-page tabloid on 4 August 1852. Until it ceased publication in 1989, it was the oldest daily newspaper in the country. [1] [2]

The newspaper was founded by William Collins and Garland William Woon, who hired William Morgan Crompton as its first editor. It began as a weekly paper, moved to twice-weekly publication in 1867 and began appearing daily in 1877. [1]

Crompton was replaced as editor in 1854 by Richard Pheney, who quit in November 1856 when he opposed the newspaper owner's support for George Cutfield over Charles Brown as Taranaki Superintendent. In May 1857 Pheney was appointed as the first editor of a rival newspaper, the Taranaki News , which changed its name to the Taranaki Daily News when it began daily publication three years later. [3]

Woon, who took over as editor following Pheney's departure, became renowned for his reporting of conflicts between imperial forces and local Māori in the First Taranaki War, with his paper being sold by subscription throughout Europe. [1] In May 1860 he was accused by military authorities of writing material that could give "information to the enemy" after criticising the defence of the town and he ran an issue with one offending paragraph removed, the white space being filled with fullpoints. It remained the one and only time the Herald was censored.

In late 1867, the paper was sold to Henry Weston and his family retained strong links with the paper for the next 111 years. Weston was sole proprietor until 1920; his nephew Walter C. Weston took over until 1930 when it was registered as a private company. Weston remained as chairman and managing director and his wife, Lillian Weston, was a director until her death in 1978. [1]

Merger and end of publication

In 1962, the Taranaki Herald and Taranaki Daily News, both of which were struggling with rising costs and the need for updated equipment, were amalgamated as Taranaki Newspapers Ltd, a subsidiary of NZ News Ltd, which owned the Auckland Star and Christchurch Star. Publication was merged at the Herald building in Currie St, New Plymouth, which it had occupied since 1900, and while the administration and publishing activity was combined, the editorial departments were kept separate and stayed fiercely competitive. [3] Taranaki Newspapers was bought by Independent Newspapers Ltd (INL) in 1989, which closed the Herald because of falling circulation and advertising volumes. [2]

Other newspapers by same publisher

Charles Brown was a New Zealand politician from the Taranaki area.

The following lists events that happened during 1857 in New Zealand.

Ōakura is a small township in New Plymouth District, Taranaki, in the western North Island of New Zealand. It is located on State Highway 45, 15 kilometres south-west of New Plymouth. Ōkato is 12 km further south-west. The Oakura River flows past the town and into the North Taranaki Bight. To the south is the Kaitake Range, part of Egmont National Park.

Moturoa is a coastal suburb of New Plymouth, in the western North Island of New Zealand. It is located to the west of the city centre, bordering Port Taranaki and The Sugar Loaf Islands. One of the islands, Moturoa, the largest, shares its name with the suburb.

Alton is a small rural community in south Taranaki, in the western North Island of New Zealand. It is located between the towns of Hāwera and Patea. 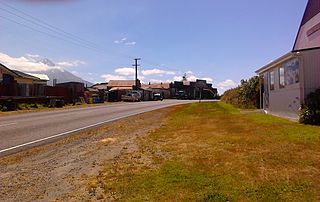 Cardiff is a settlement in inland Taranaki, in the western North Island of New Zealand. It is located five kilometres southwest of Stratford close to Egmont National Park.

Tongapōrutu is a settlement in northern Taranaki, in the North Island of New Zealand. It is located on State Highway 3 at the mouth of the Tongaporutu River, 15 kilometres south of Mokau. Tongapōrutu is well known in New Zealand for its 'Three Sisters' rock formations and its Māori petroglyphs carved into cave rock walls. However, both the Māori rock carvings and the 'Three Sisters formations are constantly being eroded by the Tasman Sea.

Awakino is a settlement in the south of Waitomo District, in the North Island of New Zealand. It is located on State Highway 3 at the mouth of the Awakino River, five kilometres north of Mokau. It is 79 km southwest of Te Kuiti, and 98 km northeast of New Plymouth.

Puke Ariki is a combined museum and library at New Plymouth, New Zealand which opened in June 2003. It is an amalgamation of the New Plymouth Public Library and the Taranaki Museum. Its name, Māori for "hill of chiefs", is taken from the Māori village that formerly occupied the site.

Pukekura Park is a Garden of National Significance, covering 52ha near the heart of New Plymouth, Taranaki in New Zealand.

Moturoa AFC is one of New Zealand's oldest association football clubs. Based in New Plymouth, the club traces its establishment back to the Watersiders Association Football Club of New Plymouth.

Francis Joseph Mace, also known as Frank Mace, was a Taranaki settler whose exploits during the Taranaki Wars earned him much praise. Chief among his awards was the New Zealand Cross, the highest colonial gallantry award available in New Zealand.

William Henry John Seffern (1829–1900) was a New Zealand printer, newspaper editor, journalist and historian. Born in County Cork, Ireland in 1829, he emigrated to Australia before moving to Auckland, New Zealand in the 1850s. As of the mid-1860s, Seffern he was the manager and later proprietor of the Auckland newspaper, the New-Zealander. In 1868 he became the manager and editor of the Taranaki Herald. He wrote a number of works on the history of Taranaki in the 1880s and 1890s. He retired from the Taranaki Herald in 1895, and died in New Plymouth in October 1900.

Marianne Muggeridge is a New Zealand painter and screenprinter based in Taranaki. She is best known for portraits of notable New Zealanders, cityscapes and landscapes.