Joe Montana Football is an American football video game developed by Electronic Arts, and published by Sega for the Genesis in 1991. Although the game does feature Joe Montana (as the title respectively says) as a playable character, since Sega did not obtain licenses from either the NFL or the National Football League Players Association (NFLPA), teams are named generically after US cities, meaning Joe Montana is the only real player in the game. It was the first game in what would become Sega's NFL Football video game series.

Similar to other football games of the time, the gameplay follows a slightly simplified version of standard American Football rules. Players have the option to play as different teams, as well as select number of players. Players also have the option to turn penalties on or off. Players may also play a normal game, a mode with a two-minute drill, and the Sega Bowl mode.

Following the launch of the Genesis in the United States, Sega of America president and CEO Michael Katz planned to create a library of instantly-recognizable titles for the console by contracting with celebrities and athletes to produce games using their names and likenesses. As part of this, Sega signed a US$1.7 million five-year contract with Joe Montana, despite concerns among the Japanese executives that the game would not earn enough to cover this cost. [1]

Since Sega of America did not at the time have a large game production facility and Sega Enterprises had never designed a football game, Sega contracted with Mediagenic to develop the game for November 1989. No one at Sega was aware of the turmoil inside Mediagenic at the time; despite five months of reports that development was proceeding on schedule, Katz discovered in September or October that the game was hardly begun. To have a football game for Christmas release, Sega would have to find an already-completed game that could be converted. [2]

Mediagenic did develop a DOS version of the game (contractor Mindspan) and it was published in 1990 (MobyGames). The opening video clip was the first commercial use of the video playback system (developed at Mediagenic) that would later be used in "The Return to Zork".

Though Joe Montana Football and John Madden Football were made by the same company, Madden had realistic plays and a full roster of 28 teams, while Montana was a more arcade-style game with only 16 teams and a simplified, passing-intensive offense. [1] Prior to the release of Montana, Park Place had developed the game so well that it surpassed Madden, and they believed it would hurt the sales of Madden. According to Michael Knox, they took Montana and "scaled it back" just before releasing the game back to Sega. [3]

Although not as successful as the Madden series, Joe Montana Football and the sequels helped establish the Genesis' reputation as the top platform for sports simulations and proved to Sega Enterprises that sports games could be worthwhile investments. [1] [2]

Madden NFL is an American football video game series developed by EA Tiburon for EA Sports. It is named after Pro Football Hall of Fame coach and commentator John Madden, and has sold more than 130 million copies. It also currently is the only officially licensed National Football League (NFL) video game, and has influenced many players and coaches of the physical sport. Among the game's features are detailed playbooks and player statistics, and voice commentary in the style of a real NFL television broadcast. As of 2013 the franchise has generated over $4 billion in sales.

NFL 2K is an American football video game series developed by Visual Concepts and published by Sega. The series was originally exclusive to Sega's Dreamcast video game console due to the absence of EA Sports's Madden NFL series on the system. As the foremost "2K" title, it marked the beginning of a running athletics series that eventually led to the spinning off of 2K's sports publishing business under the name of 2K Sports. Upon the Dreamcast's discontinuation, the series continued to be published for other sixth generation game systems and became the chief competitor of the Madden series.

Mutant League Football is a video game that was released in 1993 for the Sega Genesis. It has long been believed that the game was designed using the Madden '93 engine, but was actually made from scratch, and features a different take on football, where the games resemble a war as much as a sporting competition. 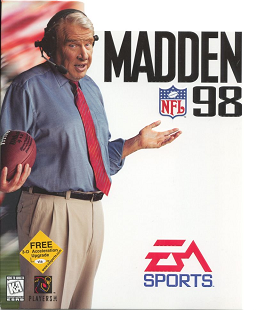 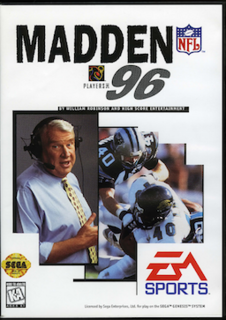 Madden NFL '96 is a football video game designed for the 1995 NFL season, licensed by the NFL. The AI has been boosted and can now hurry in two-minute drill situations, spike the ball, and cover the receivers with better efficiency.

John Madden Football '93 is a 1992 sports video game developed by Blue Sky Productions and Electronic Arts and published by EA Sports Network. Based on the sport of American football, the game puts the player in control of a football team in modes such as tournament play and sudden death. It was officially endorsed by John Madden. 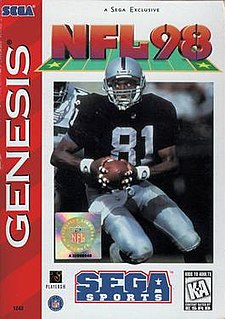 NFL 98 is a sports game released for the Sega Genesis in 1997. Based on the National Football League, the game was a follow up to Sega's only football video game for the Sega Saturn, NFL '97. It is the last game in Sega's original Joe Montana/NFL series, which would be succeeded by NFL 2K.

NCAA Football was an American football video game series developed by EA Sports in which players control and compete against current Division I FBS college teams. It served as a college football counterpart to the Madden NFL series. The series began in 1993 with the release of Bill Walsh College Football. EA eventually acquired the licensing rights to the NCAA name and officially rechristened the series with the release of NCAA Football 98. 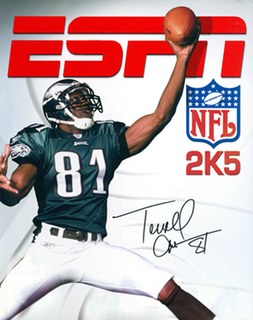 ESPN NFL 2K5 is an American football video game developed by Visual Concepts for the PlayStation 2 and Xbox consoles. Published by 2K Sports and the Sega Corporation, it is the sixth installment of the NFL 2K series and the last to use official NFL licensing until an unnamed sequel is released in 2021. Gameplay is presented as a live ESPN television broadcast and features the voices and digital likenesses of multiple ESPN on-air personalities.

EA Tiburon is an Electronic Arts video game development studio located in Maitland, Florida, United States founded in 1994. It was formerly known as Tiburon Entertainment, which was acquired by EA in 1998. EA had already purchased a minority equity interest in Tiburon in May 1996, the terms of which included that Tiburon would develop games exclusively for EA.

Troy Aikman NFL Football is an american football video game originally developed by Leland Interactive Media and published by Tradewest for the Super Nintendo Entertainment System first in North America on August 1994. Officially licensed from the National Football League, it prominently features former NFL player Troy Aikman, who became the first member of the 1993 Dallas Cowboys to have his namesake in a game, followed by his teammate Emmitt Smith in Emmitt Smith Football.

ESPN Sunday Night NFL is a sports video game that was released for the Super NES, Sega CD, and Sega Genesis in 1994. 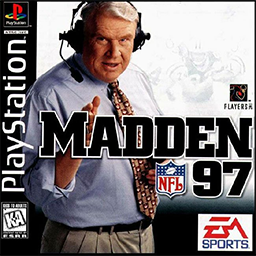 Madden NFL 97 is a football video game released in 1996. Though it was the fifth game in the Madden NFL series to be created in the 32-bit gaming era, it was only the second to be released for any current generation consoles of that era. Versions were released for the 32-bit PlayStation and Sega Saturn, the 16-bit Super NES and Genesis, and the 8-bit Game Boy. 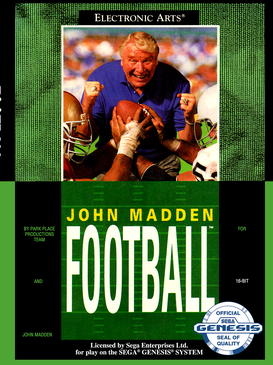 John Madden Football is a football video game, the second Madden football game released by Electronic Arts. It is the series debut on the Sega Genesis and later on the Super Nintendo Entertainment System and the Commodore Amiga.

NFL GameDay is a series of American football video games for both the PlayStation and PlayStation 2 video game consoles. NFL GameDay directly competed with EA Sports' Madden NFL Football and Sega's NFL 2K franchises. The NFL GameDay series began with NFL GameDay released for the 1995-96 NFL season and ended with NFL GameDay 2005 following EA's acquisition of exclusive NFL licensing. The games were designed by 989 Sports throughout their ten-year duration.