John Leonard King, Baron King of Wartnaby (29 August 1917 – 12 July 2005) was a British businessman, who was noted for leading British Airways from an inefficient, nationalised company to one of the most successful airlines of recent times. This success was a flagship of Margaret Thatcher's privatisation programme. He was also directly involved with the "dirty tricks" campaign waged by British Airways, against Virgin Atlantic.

King was born in Brentford, Middlesex. His father Albert had fought in the First World War, and later worked as a postman; his Irish mother Kathleen worked as a seamstress. He was the second of four children. He was reared on a small property attached to a public house in Dunsfold, Surrey. He left school in 1929 at the age of 12 without qualifications and started work in a local factory which produced vacuum cleaners, where his work included machining clamping stays, earning him the nickname "Clamping Stay King". His next job was with local businessman Arthur Sykes, as a car salesman (with duties including re-possessing cars from people who had failed to make the necessary payments) before setting up his own taxi business and acquiring a Ford cars sub-agency and naming it Whitehouse Motors. When the second World War broke out, the motor business folded, but by then King had diversified into more general engineering work and so prospered from defence contracts and making parts for aircraft. He benefited hugely from War Ministry contracts and was able to use rare American machine tools that he acquired under the Lend Lease programme.

After the war King moved to Canada for a time, before returning to England and building a factory on wasteland in Ferrybridge, Yorkshire to establish Ferrybridge Industries. After renaming it the Pollard Ball and Roller Bearing Company and producing millions of ball bearings per year, it grew to become a major operation spanning several continents (the third-largest ball-bearing business in the UK). After being forced to merge the business with another manufacturer, Ransome & Marles, as part of a government reorganisation of the ball bearing business, King sold it for £10m in 1968, netting some £3m personally.

He became Chairman of Dennis Specialist Vehicles in 1970, and Babcock International in 1972. Babcock was acquired by FKI Electricals for £415 million in August 1987. King, Babcock chairman since 1972, became chairman of the new combined company, called FKI Babcock. He was knighted in 1979, and appointed Chairman of the National Enterprise Board in 1980 and, famously, taking over as head of British Airways.

Dubbed "Mrs. Thatcher's favourite businessman" he was chosen to prepare the loss-making nationalised flag carrier for privatisation. King joined British Airways in 1981 when the airline was losing in excess of £140m a year. By 1989, the airline was making a pre-tax profit of £268m. Some of King's major changes at the airline included removing 22,000 staff members, hiring Colin Marshall as CEO in 1983, removing older aircraft from the fleet, purchasing more modern and efficient airliners, and axing unprofitable routes. Within two years King had replaced over half of the BA board with his own appointees. When BA was privatised in 1987, the initial share offering was 11 times oversubscribed. His compensation as chairman rose from about £250,000 in 1988 to £669,350 (including a £220,000 bonus) in 1991. King was created a life peer as Baron King of Wartnaby, of Wartnaby in the County of Leicestershire on 15 July 1983. [1]

Lord King recognised the importance of Concorde to British Airways. In its early years of service with BA, Concorde lost the carrier money and attracted criticism from the press as a white elephant. BA used Concorde to win business customers from transatlantic competitors by guaranteeing a certain number of Concorde upgrades in return for corporate accounts with the airline.

Around the same time, British Airways was witnessing the emergence of rival; Richard Branson's Virgin Atlantic. Virgin, which began with one route and one Boeing 747 in 1984, was emerging as a serious threat on some of BA's most lucrative routes. Following a highly publicised mercy mission to Iraq to fly home hostages who had been held by Saddam Hussein in 1991, [2] King is reported to have told Marshall and his PA Director David Burnside to "do something about Branson". [3] This began the campaign of "dirty tricks", for which Branson sued King and British Airways for libel in 1992. King countersued Branson with the case scheduled for trial in 1993. However, it was settled out of court, with BA paying damages to Branson of £500,000 and a further £110,000 to his airline; further, BA paid legal fees of up to £3 million. [4]

King stepped down from his BA leadership role in 1993, but remained BA president emeritus. His interests included directorships at the Daily Telegraph , Spectator , headhunting company Norman Broadbent, and engineering firm Short Brothers. However, it can be said that until the end he remained passionate about his "ugly duckling that became the world's favourite airline."

King was married twice; first to Lorna Sykes (daughter of his first boss Arthur Sykes and sister-in-law of John Poulson) in 1941. The couple remained married until her death from cancer in 1969. King remarried in 1970 to the Hon Isabel Monckton, daughter of 8th Viscount Galway. [5]

A keen huntsman from an early age, King held the rank of MFH (Master of Foxhounds) with the Belvoir and Badsworth hunts and was also Chairman of the Lord King XI cricket team.

He and wife Lorna both learnt to fly and they would use an aircraft to tour the UK and drum up business.

Lord King kept a flat in London for many years, in Eaton Square, and during his time running British Airways he lived there during the week full-time. At weekends, he travelled north to his country estate, Friars Well Estate, in Wartnaby near Melton Mowbray in the county of Leicestershire. He also had a house in Scotland, close to the River Naver, where he pursued his love of fly fishing.

British Airways (BA) is the flag carrier airline of the United Kingdom, headquartered in London, England, near its main hub at Heathrow Airport. It is the second largest airline in the United Kingdom, based on fleet size and passengers carried, behind easyJet. In January 2011 BA merged with Iberia, creating the International Airlines Group (IAG), a holding company registered in Madrid, Spain. IAG is the world's third-largest airline group in terms of annual revenue and the second-largest in Europe. It is listed on the London Stock Exchange and in the FTSE 100 Index. British Airways is the first passenger airline to have generated more than $1 billion on a single air route in a year. 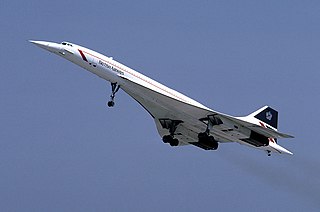 The Aérospatiale/BAC Concorde is a British–French turbojet-powered supersonic passenger airliner that was operated until 2003. It had a maximum speed over twice the speed of sound, at Mach 2.04, with seating for 92 to 128 passengers. First flown in 1969, Concorde entered service in 1976 and continued flying for the next 27 years. It is one of only two supersonic transports to have been operated commercially; the other is the Soviet-built Tupolev Tu-144, which operated in the late 1970s.

Sir Richard Charles Nicholas Branson is a British business magnate, investor, author and former philanthropist. He founded the Virgin Group in the 1970s, which controls more than 400 companies in various fields.

British Midland Airways Limited was an airline with its head office in Donington Hall in Castle Donington, close to East Midlands Airport, in the United Kingdom. The airline flew to destinations in Europe, the Middle East, Africa, North America and Central Asia from its operational base at London Heathrow Airport, where at its peak it held about 13% of all takeoff and landing slots and operated over 2,000 flights a week. BMI was a member of Star Alliance from 1 July 2000 until 20 April 2012.

David Wilson Boyd Burnside is a Northern Ireland politician, and was Ulster Unionist Party Member of Parliament for South Antrim.

British Caledonian (BCal) was a British private independent airline which operated out of Gatwick Airport in south-east England during the 1970s and 1980s. It was created as an alternative to the British government-controlled corporation airlines and was described as the "Second Force" in the 1969 Edwards report. It was formed by the UK's second-largest, independent charter airline Caledonian Airways taking over British United Airways (BUA), then the largest British independent airline and the United Kingdom's leading independent scheduled carrier.

In 1997 British Airways (BA) adopted a new livery. One part of this was a newly stylised version of the British Airways "Speedbird" logo, the "Speedmarque", but the major change was the introduction of tail-fin art. Also known as the Utopia or world image tailfins, they used art and designs from international artists and other sources to represent countries on BA's route network. The signature of the artist was carried near the design on the tail.

Sir Roderick Ian Eddington AO FTSE is an Australian businessman. He is currently chair of the government body Infrastructure Australia and a director of News Corporation, continuing his long association with that company. He has served in other senior positions including as CEO of British Airways.

Robert John Ayling, also known as Bob Ayling, is a British retired lawyer and businessman who has worked with a variety of high-profile companies and organisations. From 1996 to 2000, he was the CEO of British Airways. He also served as chairman of Her Majesty's Courts and Tribunals Service, Dwr Cmru, and Dyson. Ayling was awarded a CBE in the Queen's 2018 Birthday Honors List.

CityFlyer Express was a short-haul regional airline with its head office in the Iain Stewart Centre next to London Gatwick Airport in England. 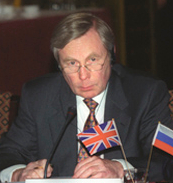 Colin Marsh Marshall, Baron Marshall of Knightsbridge was a British businessman and member of the House of Lords.

Mike Bannister is an airline pilot. He is most famous as the Chief Pilot of British Airways' Concorde fleet, a post which he held from 1995 until its withdrawal from service in 2003. 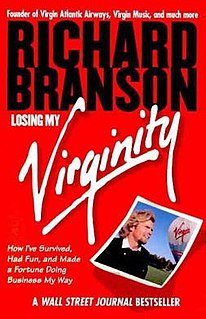 Losing My Virginity: The Autobiography is the autobiography of the British businessman Richard Branson. Published in 1998, it was later followed by other biographical books by Branson, including Business Stripped Bare: Adventures of a Global Entrepreneur (2008) and The Virgin Way: How to Listen, Learn, Laugh and Lead (2014).

British Airways (BA), the United Kingdom's national airline, was formed in 1974 with the merger of the two largest UK airlines, British Overseas Airways Corporation (BOAC) and British European Airways (BEA), and including also two smaller regional airlines, Cambrian Airways and Northeast Airlines. The merger was the completion of a consolidation process started in 1971 with the establishment of the British Airways Board, a body created by the British government to control the operations and finances of BOAC and BEA, which initially continued to exist as separate entities.

Damien McCrystal became the first City editor of The Sun, News International’s daily tabloid, in September 1987 after Robert Worcester, the founder of Market & Opinion Research International told Rupert Murdoch, the owner of News International, that the wave of utility company privatisations in the UK had turned one-quarter of The Sun’s readers into share-owners.

David Martin Tait OBE is a Scottish-born commercial airline executive, brand/marketing consultant, Washington Post best-selling author and syndicated travel columnist. Best known for his work as one of the architects of the Virgin Atlantic Airways business plan he was one of the nascent company’s first employees. During his career, Tait has served in senior executive and advisory positions for a number of airlines and travel-related companies. He is co-founder of online training company Autism Double-Checked.

Pollard Ball and Roller Bearing Company with its headquarters at Ferrybridge, West Yorkshire was a manufacturer of ball and roller bearings founded by John King. Formerly it had been known as Ferrybridge Industries and was originally a small family motor repair firm, Whitehouse Motor Industries, Ford dealers. Ferrybridge owned Pollard Bearings Limited.