McGuff began his coaching career as an assistant coach at Miami University where the Lady Hawks went 54–30 during his tenure in Oxford, Ohio. [3]

McGuff spent nine seasons at Xavier, compiling an overall record of 213–73, giving him the most wins of any Xavier women's coach. The Musketeers made the postseason in each of McGuff's seasons as head coach, with the last five being in the NCAA tournament. During this stretch, Xavier's best run was in 2010, when the Musketeers lost [4] in the Elite Eight to Stanford.

Kevin Michael White is an American college administrator who is the former athletic director at Duke University. He held this position from May 30, 2008 until his retirement on September 1, 2021. White succeeded Joe Alleva as the Blue Devils' AD when Alleva accepted the same position at Louisiana State University. 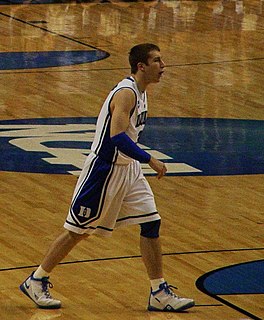 Gregory Russell Paulus is an American basketball coach and former player who is the head coach of the Niagara Purple Eagles men's basketball team. He previously served as an assistant basketball coach for Louisville, Ohio State, and George Washington University. Paulus is a former multi-sport athlete, playing college basketball as a point guard on the Duke University men's team and later football at Syracuse University. 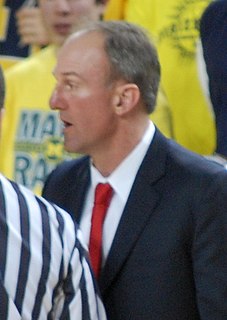 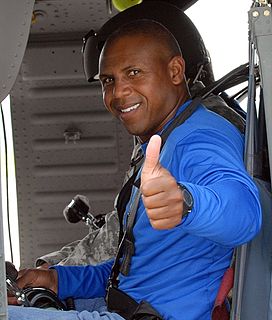 Joe "Joker" Phillips Jr. is an American football coach and former player. He is currently the wide receivers coach for NC State.

The Xavier Musketeers men's basketball team represents Xavier University in Cincinnati, Ohio. The school's team currently competes in the Big East Conference, and are coached by Sean Miller. Xavier has appeared in the NCAA tournament 28 times, 16 times in the 18 tournaments between 2001 and 2018. On March 11, 2018, Xavier earned its first ever No. 1 seed in the NCAA Tournament. Xavier is also a two-time winner of the NIT, with their most recent championship coming in 2022.

Gene Cross is a former American college and professional basketball coach, currently serving as a Director, Scouting & Administration for the New York Knicks of the National Basketball Association (NBA).

Christopher Lee Mack is an American college basketball coach and the former head coach at the University of Louisville and Xavier University.

The 2010–11 NCAA Division I men's basketball season began on November 8, 2010, with the preliminary games of the 2010 Coaches vs. Cancer Classic, and ended with the 2011 NCAA Division I men's basketball tournament's championship game on April 4, 2011, at Reliant Stadium in Houston. The tournament's first-round games occurred March 15–16, 2011, in Dayton, followed by second and third rounds on Thursday through Sunday, March 17–20. Regional games were March 24–27, with the Final Four played April 2 and 4.

The 2012–13 NCAA Division I women's basketball season began in November and ended with the Final Four in New Orleans, April 7–9. 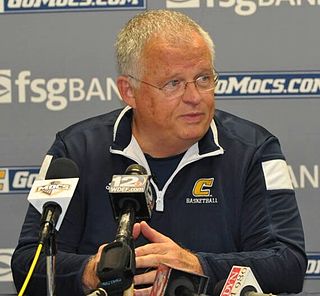 Jim Foster is the former head coach of the women's college basketball team at Chattanooga. He has previously served as a head coach of the women's basketball team at St. Joseph's, Vanderbilt and Ohio State. He has been elected to the Women's Basketball Hall of Fame as a member of the class of 2013. On February 1, 2018, Foster notched his 900th career win as a head coach, becoming the eighth fastest to reach that mark and tying for seventh in all-time career wins. He announced his retirement in May 2018, after 40 years on the bench.

The Washington Huskies women's basketball team represents the University of Washington in NCAA Division I college basketball competing in the Pac-12 Conference. Their home games are played at Alaska Airlines Arena at Hec Edmundson Pavilion, located in Seattle.

Scott Googins is an American college baseball coach who is the head coach of the University of Cincinnati Bearcats Baseball Team. Googins was hired on June 6, 2017. He left Xavier after being the skipper of the Musketeers baseball team since the start of the 2006 season. Under Googins, Xavier appeared in three NCAA Tournaments. In 2008, he was named the A-10 Coach of the Year, and in 2009, he was named the ABCA Mideast Region Coach of the Year. Googins is an alumnus of Ohio Wesleyan University, where he played baseball for the Battling Bishops.

The 2016–17 Ohio State Buckeyes women's basketball team represented the Ohio State University during the 2016–17 NCAA Division I women's basketball season. The Buckeyes, led by fourth year head coach Kevin McGuff, played their home games at Value City Arena and were members of the Big Ten Conference. They finished the season 28–7, 15–1 in Big Ten play to win a share of the Big Ten regular season title with Maryland. They defeated Northwestern in the quarterfinals of the Big Ten women's basketball tournament before losing to Purdue. They received at-large bid of the NCAA Women's Tournament as the No. 5 seed in the Lexington region. There they defeated Western Kentucky and Kentucky to advance to the Sweet Sixteen. In the Sweet Sixteen, they lost to Notre Dame.

The 2017–18 Xavier Musketeers men's basketball team represented Xavier University during the 2017–18 NCAA Division I men's basketball season as a member of the Big East Conference. Led by ninth-year head coach Chris Mack, they played their home games at the Cintas Center in Cincinnati, Ohio. They finished the season 29–6, 15–3 in Big East play to win the Big East championship. In the Big East Tournament, they defeated St. John's before losing to Providence in the semifinals. They received an at-large bid to the NCAA tournament as a No. 1 seed in the West region. In the First Round, they defeated Texas Southern before being upset by Florida State in the Second Round.

The 2017–18 Ohio State Buckeyes women's basketball team represented the Ohio State University during the 2017–18 NCAA Division I women's basketball season. The Buckeyes, led by 5th year head coach Kevin McGuff, played their home games at Value City Arena and were a member of the Big Ten Conference. They finished the season 28–7, 13–3 in Big Ten play to win the regular season title. They defeated Rutgers, Minnesota, and Maryland to win the Big Ten women's basketball tournament. As a result, they received the conference's automatic bid to the NCAA Women's Tournament as the No. 3 seed in the Spokane region. There they defeated George Washington in the First Round before being upset by No. 11-seeded Central Michigan in the Second Round.

The 2018–19 Xavier Musketeers men's basketball team represented Xavier University during the 2018–19 NCAA Division I men's basketball season as a member of the Big East Conference. Led by first-year head coach Travis Steele, they played their home games at the Cintas Center in Cincinnati, Ohio. Xavier finished the season 19–16, 9–9 in Big East play to finish in third place. In the Big East Tournament, Xavier beat Creighton in the quarterfinals before losing to Villanova in the semifinals. The Musketeers failed to receive a bid to the NCAA tournament, but received an at-large bid to the National Invitation Tournament. There they defeated Toledo in the first round before losing in overtime to Texas in the second round.

Jonas Hayes is an American college basketball coach and former player. He is the current head coach of Georgia State. He previously served as an assistant coach, and later interim head coach, for the Xavier Musketeers. He was also an assistant coach for the Morehouse Maroon Tigers, South Carolina State Bulldogs, Belmont Abbey Crusaders, and Georgia Bulldogs. Hayes played college basketball for the Western Carolina Catamounts and Georgia Bulldogs.