While the medieval Angevin Kingdom of Albania was a monarchy, it did not encompass fully the entirety of the modern state of Albania and was ended soon by the Albanian nobles by 1282 when they understood that the Angevin king was not going to keep his promises and thus the Roman Emperor from Constantinople was requested to come. In middle ages in the 14th and 15h centuries several Albanian nobles called themselves as "King or Lord of Albania" including Karl Thopia, Andrea II Muzaka or the famous Skanderbeg.

The modern Albania has been a kingdom on two occasions.

The first occasion was after the Albanian Declaration of Independence in 1912, though a ruler was not chosen until 1914, and was forced into exile that year when World War I led to the occupation of Albania. The country remained unstable until establishing the Albanian Republic in 1924. The second occasion started in 1928, when the president of the republic declared himself the new monarch. The continuity of the second modern kingdom is distorted by the onset of World War II, occupation by Italy until 1943, then occupation by Nazi Germany until 1944, then civil war until 1946, which ended with the establishment of the People's Socialist Republic of Albania. After Albania became the last European nation to embrace the Fall of Communism in 1992, it became a unitary parliamentary constitutional republic, though there continues to be hereditary pretenders to the long non-existent title of King of the Albanians.

The Albanian Congress of Trieste of 1913 discussed the question of the future prince and several candidates came through: Baron Franz Nopcsa von Felső-Szilvás, Marchese D'Auletta (claiming descendance from Skanderbeg) with the support of the Arbereshe delegates and Italy, Prince Albert Ghica from Romania supported by the Albanian colony there, and Aladro Kastriota. [1]

Under the independence settlement imposed by the Great Powers, the country was styled a principality, and its ruler, William of Wied (German : Wilhelm zu Wied), was titled prince. However, these styles were only used outside the country. In Albanian, William was referred to as mbret, meaning king. This was because many local nobles already had the title of prince (princ, prinq, or prenk in various Albanian dialects), and because domestically the Albanian sovereign could not be seen as holding a title inferior to that of the king of Montenegro. Prince William's full style was: "By the grace of the powers and the will of the people the prince of Albania".

William was forced into exile by internal disorder just after the outbreak of World War I, and Albania was to be occupied by various foreign powers for most of the war. In the confusing aftermath of the war, some of the several regimes competing for power officially styled themselves as regencies for William. Albania's first monarchy ended definitively when the restored central government declared the country a republic in 1924.

Four years later, on September 1, 1928, President Ahmed Bey Zogu proclaimed himself "king of the Albanians" [2] (Mbret i Shqiptarëve in Albanian). Zog sought to establish a constitutional monarchy. Under the royal constitution, the Albanian king, like the king of the Belgians, had to swear an oath before parliament before entering into his royal powers. The text of the oath was as follows:

I, name, King of the Albanians, on ascending the Throne of the Albanian Kingdom and assuming the Royal powers, swear in the presence of God Almighty that I will maintain national unity, the independence of the state, and its territorial integrity, and I will maintain and conform to the statute and laws in force, having the good of the people always in mind. So help me God!

Zog's kingdom was closely tied to Italy, then ruled by Victor Emmanuel III. On April 7, 1939, Italy occupied Albania, treating it as the Italian protectorate of Albania. Zog fled the country, though he never abdicated, and five days later the Albanian Parliament proclaimed Victor Emmanuel as the new King of the Albanians. When the Italian armed forces started being decimated in 1943, Victor Emmanuel signed the Armistice of Cassibile with the Allies on 3 September 1943, which included his abdication as the Albanian monarch and the end of the so-called protectorate. While Zog I was reinstated as king (in absentia) by pro-monarchy partisans, this action was opposed by pro-communist partisans, all made moot as Nazi Germany immediately commenced the German occupation of Albania. The Germans were pushed out by late 1944, by which point the partisan factions were basically fighting a civil war. This continued until the socialist People's Republic of Albania was established in 1946.

During and after World War II, some Albanians worked for the return of King Zog; however, they were not successful. Neither Zog nor Victor Emmanuel had his Albanian royal title widely acknowledged by the international community. Zog's son, Crown Prince Leka (1939–2011), was the main pretender to the Albanian Crown. As he himself stated, his title was not "king of Albania" but "king of the Albanians", which included a claim to Kosovo and part of today's North Macedonia. Since Crown Prince Leka's death in late November, 2011, the main pretender to the Albanian Throne is his son Leka II.

The history of Albania forms a part of the history of Europe. During the classical times, Albania was home to several Illyrian tribes such as the Ardiaei, Albanoi, Amantini, Enchele, Taulantii and many others, but also Thracian and Greek tribes, as well as several Greek colonies established on the Illyrian coast. In the 3rd century BC, the area was annexed by Rome and became part of the Roman provinces of Dalmatia, Macedonia and Moesia Superior. Afterwards, the territory remained under Roman and Byzantine control until the Slavic migrations of the 7th century. It was integrated into the Bulgarian Empire in the 9th century. 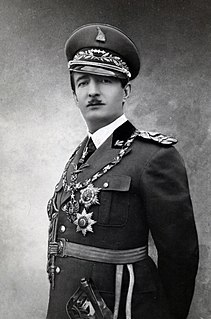 Prince Wilhelm of Wied, reigned briefly as sovereign of the Principality of Albania as Vilhelm I from 7 March to 3 September 1914, when he left for exile. His reign officially came to an end on 31 January 1925, when the country was declared an Albanian Republic.

The House of Zogu, or Zogolli during Ottoman times and until 1922, is an Albanian dynasty whose roots date back to the early 14th century. The family provided the first president and the short-lived modern Albanian Kingdom with its only monarch, Zog I of Albania (1928–1939).

Countess Géraldine Margit Virginia Olga Mária Apponyi de Nagy-Appony was the Queen consort of King Zog I of the Albanians and the mother of Leka I, Crown Prince of Albania.

Leka I, Crown Prince of Albania, was the only son of King Zog I of the Albanians and his queen consort, born Countess Géraldine Apponyi de Nagyappony. He was called Crown Prince Skander at birth. Leka was the pretender to the Albanian throne and was referred to as King Leka I.

Susan of Albania, also known as Susan Barbara Zogu, was the Australian-born wife of Leka, Crown Prince of Albania. 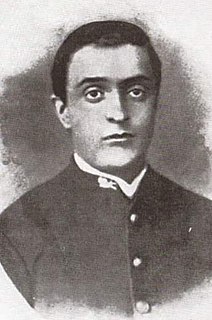 The Albanian Kingdom was the official name of Albania between 1928 and 1939. Albania was declared a monarchy by the Constituent Assembly, and President Ahmet Bej Zogu was declared King Zog I. The kingdom was supported by the fascist regime in Italy, and the two countries maintained close relations until Italy's sudden invasion of the country in 1939. Zog fled into exile and never saw his country again. The Communist Party of Labor of Albania gained control of the country toward the end of World War II, established a communist government, and formally deposed Zog. 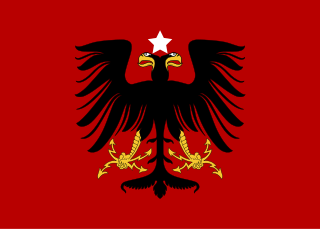 The Principality of Albania refers to the short-lived monarchy in Albania, headed by Wilhelm, Prince of Albania, that lasted from the Treaty of London of 1913 which ended the First Balkan War, through the invasions of Albania during World War I and the subsequent disputes over Albanian independence during the Paris Peace Conference of 1919, until 1925, when the monarchy was abolished and the Albanian Republic declared.

The Order of Skanderbeg was originally instituted in 1925 as an order of merit of the Albanian Republic. It was replaced by the Communist government in 1945 with a new award of the same name. Skanderbeg is the national hero of the Albanian people.

The Royal Albanian Army was the army of the Albanian Kingdom and King Zog I of the Albanians from 1928 until 1939. Its commander-in-chief was King Zog; its commander General Xhemal Aranitasi; its Chief of Staff was General Gustav von Myrdacz. The army was mainly financed by Italy during period 1936–39.

Abaz Kupi or Abas Kupi. He was also known as Bazi i Canës. He was an Albanian military officer. 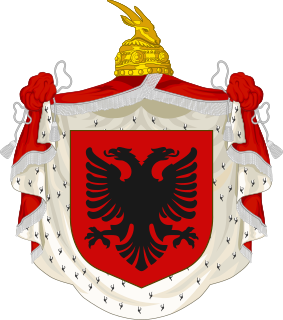 The Legaliteti were an Albanian royalist and pro-monarchy faction founded in 1941. It was led by Abaz Kupi.

The Statute of the Kingdom of Albania was the constitution of the Albanian Kingdom of 1928–39. It was introduced by King Zog I of Albania.

Skënder Zogu is an Albanian author and member of the House of Zogu. As the son of Prince Xhelal Zogu, he is second in the line of succession to the former Albanian throne after his first cousin once removed, Leka, Crown Prince of Albania.