Last updated October 12, 2021
Head of state of the Republic of Albania

The president is elected through a secret vote and without debate by the Parliament of Albania by a majority of three-fifths of all its members and is elected for 5 years. [5] However, the Constitution of Albania sets a limit to a maximum of two terms in office. [6] The president-elect is required to take an oath of office before the members of the Parliament of Albania. The most recent officeholder was Ilir Meta of the Socialist Movement for Integration who was impeached by the Albanian parliament on 9 June 2021. [7]

See also: List of heads of state of Albania

Albania has experienced different models of governance, including an international protectorate, a monarchy, a state-party regime and the parliamentary republic as well. Throughout all this period the function of the president of Albania and head of state has been exercised in various forms.

The first government after the independence was headed by Ismail Qemali, who also enjoyed the competences of the head of state. On 6 February 1914, Prince Wilhelm Wied was appointed as head of state by the Ambassadors Conference. From September 1914 until January 1920, Albania was transformed into a battle field and experienced the change of a number of governments, where the post of the head of state was played by different governments regencies. On 8 January 1920 the Congress of Lushnjë elected the 'High Council' composed by four members, one of whom would exercise the functions of the head of state by introducing and bringing back the parliamentarian way of governance. In 1924, Fan Noli was elected as head of government while exercising at the same time the functions of the head of state. After the frequent changes in governance, the Parliament of Albania approved and passed the republican form of regime on 25 January 1925 and elected Zog I of Albania as the president of Albania. The nation was proclaimed a monarchy and Ahmet Zogu was crowned the King of Albanians on 28 September 1928. After Albania was occupied by Italy in April 1939 and the unification of the two countries, Victor Emmanuel III became the King of Albania. From 1943 to 1944 the regencies governance was introduced once again under the German occupation. [8]

The end of the second World War and the liberation of Albania that took place in 1944 were followed by the holding of the first parliamentary elections in December 1945 and also by the transformation of the head of state's function into a collegial body, the Presidium of the Parliament of Albania. During the communism from 11 January 1946 until 12 December 1990, the functions of the head of state were carried out by Omer Nishani from 10 January 1946 to 1 August 1953, by Haxhi Lleshi from 1 August 1953 to 22 November 1982 and by Ramiz Alia from 22 November 1982 to 22 February 1991. The 'Presidential Council', headed by Ramiz Alia was founded on 22 February 1991 and it lasted until 30 April 1991.

The sixth presidential elections were held on 20 June 2007 with almost four rounds. In the first round on 20 June 2007 and 27 June 2007, no candidate was presented. The Government of Albania and the opposition presented their proposed candidate lists on 5 July 2007, but did not accept either list. Afterwards, on 14 July 2007 the third round were held. At least in the fourth round on 20 July, Bamir Topi of the Democratic Party of Albania (PD) won the election. The seventh presidential elections were held on 30 May 2012 with four rounds until 11 June 2012. The first through third rounds of voting were inconclusive. In the fourth round, the result was a victory for Bujar Nishani of the Democratic Party of Albania (PD). The most recent and eighth presidential elections were held on 19, 20, 27 and 28 April 2017. In the fourth round the incumbent Chairman of the Parliament of Albania, Ilir Meta of the Socialist Movement for Integration (SMI) was elected as seventh president of Albania with 87 votes. [22]

As of Article 89 of the Albanian Constitution sets the following qualifications for holding the presidency, to be a natural-born citizen of the Albanian Republic, to be at least forty years old and to be a resident in the Republic of Albania for at least ten years. [23] [24]

I swear that I will obey to the Constitution and laws of the country, that I will respect the rights and freedoms of citizens, protect the independence of the Republic of Albania, and I will serve the general interest and the progress of the Albanian people. So help me God!

The Presidential Palace (Albanian : Pallati presidencial), popularly known as the Palace of Brigades (Albanian : Pallati i Brigadave), is the official residence of the president of Albania. [27] The Palace was commissioned by King Zog I of Albania to serve as his main official residence. After the second World War it has been used by the Government of Albania for holding official ceremonies and state receptions. Due to its location near the Grand Park of Tirana, its gardens are quite extensive. It is surrounded by trees for nearly 200 metres and decorated in patterns and shapes of various designs. In addition the Palace was designed by Italian well-known architect Gherardo Bosio. [28]

The title First Lady of Albania is an unofficial title; it is not an elected one, carries no official duties, and receives no salary. Nonetheless, first ladies have held a highly visible position in Albanian society. The role has evolved over the years, but she is, first and foremost, the spouse of the president. However, she accompanies the president in state and official visits abroad the borders of Albania. She generally oversees the administration of Presidential Palace, the mansion that serves as the official residence, while the Presidenca serves as the official office. They also organize events and civic programs, and typically get involved in different charities and social causes.

*Semiramis Xhuvani, the daughter of prominent scholar Aleksandër Xhuvani died before her husband took office of the presidency.

*Monika Kryemadhi, as a Member of Parliament and the leader of the second largest opposition party LSI, refused to take on the duties of the First Lady therefore the couple's eldest child and daughter Bora Meta is carrying on as First Lady.

Ramiz Tafë Alia was an Albanian politician serving as the second and last leader of the People's Socialist Republic of Albania from 1985 to 1991, serving as First Secretary of the Party of Labour of Albania. He was also the country's head of state from 1982 to 1992. He had been designated as successor by Enver Hoxha and took power after Hoxha died. 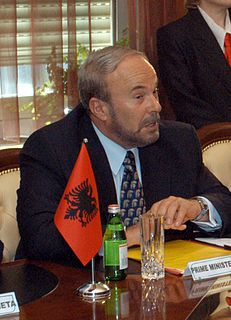 Fatos Thanas Nano is an Albanian socialist politician who served as Prime Minister of Albania in 1991, from 1997 to 1998 and from 2002 to 2005. He was the first leader and founder of the Socialist Party of Albania and a member of the Albanian Parliament from 1991 to 1996 and 1997 to 2009. He reformed the Anti-Revisionist Marxist-Leninist ideology of the Labor Party of Albania into social democracy for its successor, the Socialist Party. During his leadership, the Socialist Party, as a result of reforms, joined the Socialist International and Party of European Socialists. Nano was a candidate in the 2007 presidential election but did not win. He again tried in the 2012 presidential election, but he did not even qualify as a candidate, because the leaders of parties in Parliament obstructed their respective MPs to elect him as candidate in the elections. 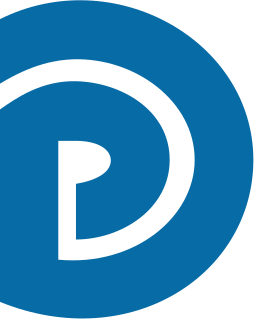 The Democratic Party of Albania is a conservative, center-right to right-wing political party in Albania. Rilindja Demokratike is the party's official newspaper. Since 2013, they have been the largest opposition party in Albania, with Lulzim Basha as party chairman. 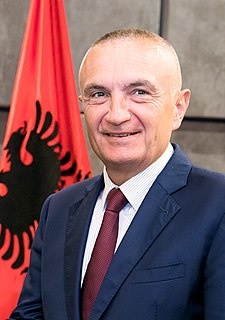 Ilir Rexhep Meta is an Albanian politician who has served as President of Albania since 24 July 2017. Previously he served as Prime Minister from 1999 to 2002 and he was Speaker of the Parliament of Albania from 2013 to 2017. Meta also held positions as Deputy Prime Minister, Minister for Europe and Foreign Affairs and Minister of Economy, Trade, and Energy. Prior to that, he held the Chairmanship of the Parliamentary Commission of European Integration. He founded the Socialist Movement for Integration in 2004.

Indirect presidential elections were held in Albania on 20 and 27 June, 8, 11, 14, and 20 July, the sixth such elections since the collapse of the communist regime in 1991.

Indirect presidential elections were held in Albania on 24 June 2002, the fifth such elections since the collapse of the communist regime in 1991. Under pressure from international organization, Alfred Moisiu was chosen by Sali Berisha and Fatos Nano as a consensus candidate for the presidency after the end of Rexhep Meidani's term. Moisiu was found fitting for that post since he was a researcher, was politically neutral, was known as an effective mediator and had a decisive pro-Western and NATO orientation.

Same-sex unions are not currently recognized in Albania, whether in the form of marriage or civil unions. 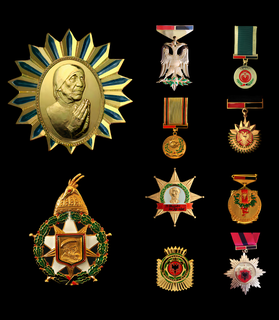 Orders, decorations and medals are distinctive symbols awarded to citizens and foreign dignitaries in Albania.

Indirect presidential elections were held in Albania on 30 May, 4, 8 and 11 June 2012, the seventh such elections since the collapse of the communist regime in 1991. The first through third rounds of voting were inconclusive. The fourth round resulted in the incumbent party's member Bujar Nishani being elected as President.

The Qafa e Vishës bus accident occurred on 21 May 2012, at Qafa e Vishës near Himarë, Albania, when a bus plunged 80 metres (260 ft) off a cliff. Most of the victims were students of Aleksandër Xhuvani University of Elbasan. The driver is also believed to have been killed. The students were travelling from Elbasan to Saranda. 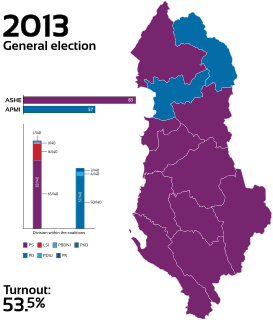 Parliamentary elections were held in Albania on 23 June 2013. The result was a victory for the Alliance for a European Albania led by the Socialist Party and its leader, Edi Rama. Incumbent Prime Minister Sali Berisha of the Democratic Party-led Alliance for Employment, Prosperity and Integration conceded defeat on 26 June, widely viewed as a sign of growing democratic maturity in Albania.

The National Flag Decoration Albanian: Dekorata e Flamurit Kombëtar, is one of the highest decorations to be given in Albania, among the Civil awards and decorations of Albania, and was instituted by special law Nr.8113, of 28 March 1996.

Indirect presidential elections were held in Albania on 19, 20, 27 and 28 April 2017, the eighth such elections since the collapse of the communist regime in 1991. In the first through third round, no candidates were proposed and no vote took place in the Parliament of Albania. In the fourth round, the incumbent Chairperson and former Prime Minister of Albania, Ilir Meta was elected as the seventh President of Albania with 87 votes. 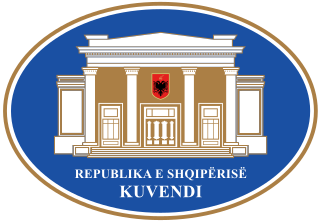 The first Government of Prime Minister Sali Berisha was the 63rd ruling Government of the Republic of Albania formed on 8 September 2015. Following the 3 July 2015 election, the Democratic Party formed a center-right post-electoral alliance to make a majority of seats to Parliament and form the government. The alliance consisted of five-center-right parties led by Sali Berisha managed to create a majority of 81 deputies out of 140 in the Assembly. The new government lead by Sali Berisha was voted on 8 September with 84-votes Pro, and took oath on 11 September in the presence of the President of the Republic Alfred Moisiu.