Prime Minister of the Netherlands

Last updated October 13, 2021
Head of the government of the Netherlands

The prime minister of the Netherlands (Dutch : Minister-president van Nederland) is the head of the executive branch of the Government of the Netherlands. [2] [3] [4] Although the monarch is the de jure head of government, the prime minister de facto occupies this role as the officeholder chairs the Council of Ministers and coordinates its policy with the rest of the cabinet. The current prime minister has been Mark Rutte since 14 October 2010, who serves in a demissionary capacity since his resignation on 15 January 2021. [5]

Gradually the prime minister became an official function of government leader, taken by the political leader of the largest party. Since 1848, the role of the first minister is relevant. In that year the Constitution of the Netherlands was amended to make ministers responsible to the States General and no longer responsible to the King, who acted as the leader of cabinet. Until 1901, the position chair of the Council of Ministers officially rotated between ministers. Between 1901 and 1945, the position formally still rotated, but prominent politicians could claim a rotation period of four years.

In 1937, a separate Ministry of General Affairs was instituted, which was informally linked to the prime minister. Barend Biesheuvel (1971–1973) was the last prime minister who was not the political leader of the largest party in cabinet; his was actually the third largest. In 1983 the function of prime minister was laid down in the constitution.

Although the prime minister is the leading Dutch political figure and holder of the de facto highest office, they are not quite as powerful as the British Prime Minister and the German Chancellor. This is mainly because, historically, all Dutch ministers used to be responsible to the Monarch; ministers took turns to fill the position of prime minister, and in the role had little if any control over the other ministers. The prime minister's role gained importance when ministers became responsible to the parliament, and the position became mostly reserved for the leader of the biggest political party in the House of Representatives. Still, because the position holds limited powers compared to its equivalent in other neighboring parliamentary democracies, the prime minister's role is described as primus inter pares ("first among equals"). [4]

The prime minister chairs the weekly meetings of the Council of Ministers and has the power to set the agenda of these meetings. The prime minister is also Minister of General Affairs (Minister van Algemene Zaken), which takes an important role in coordinating policy and is responsible for the Government Information Service (Dutch: Rijksvoorlichtingsdienst).

Although the prime minister is almost always the political leader of his party and a member of the House of Representatives, he is required to give up his seat for the duration of his tenure, as Dutch ministers are not allowed to be members of parliament.

The Dutch electoral system makes it all but impossible for one party to win an outright majority in the House of Representatives; no party has done so since 1900. Hence, Dutch governments are always coalitions between two or more parties. After each election, the House appoints a "scout" to seek advice on how to interpret the election results. On the basis of this advice, the House appoints an informateur to check on prospective coalitions and lead negotiations between potential partners. If successful, the House then appoints a formateur, who concludes the talks between the members of the prospective coalition. The formateur is almost always the leader of the largest party in the prospective coalition, and thus de facto prime minister-designate. Prior to 2012, the monarch had a considerable role in these talks, but reforms in 2012 largely eliminated royal influence on the process.

It usually takes several months of negotiations before a formateur is ready to accept a formal royal invitation to form a government. The monarch then appoints the ministers and state secretaries (junior ministers), who then resign their seats in the House.

A minister from the smaller coalition party usually becomes Deputy Prime Minister of the Netherlands. If there is a third or fourth party in the coalition, each has the right to name one of its ministers second and third deputy prime minister. [12]

Jan Pieter "Jan Peter" Balkenende Jr.KmstkNO CSG is a Dutch politician of the Christian Democratic Appeal (CDA) party and jurist who served as Prime Minister of the Netherlands from 22 July 2002 to 14 October 2010.

The Christian Democratic Appeal is a Christian-democratic political party in the Netherlands. It was originally formed in 1977 from a confederation of the Catholic People's Party, the Anti-Revolutionary Party and the Christian Historical Union; it has participated in all but three cabinets since it became a unitary party.

Andreas Antonius Maria "Dries" van Agt is a Dutch politician and diplomat of the defunct Catholic People's Party (KVP) and later the Christian Democratic Appeal (CDA) party and jurist who served as Prime Minister of the Netherlands from 19 December 1977 until 4 November 1982.

The House of Representatives is the lower house of the bicameral parliament of the Netherlands, the States General, the other one being the Senate. It has 150 seats, which are filled through elections using a party-list proportional representation. Generally, the house is located in the Binnenhof in The Hague, however, it has temporarily moved to the former building of the Ministry of Foreign Affairs at Bezuidenhoutseweg 67 in the Hague while the Binnenhof is being renovated.

The Prime Minister of Belgium or the Premier of Belgium is the head of the federal government of Belgium, and the most powerful person in Belgian politics. 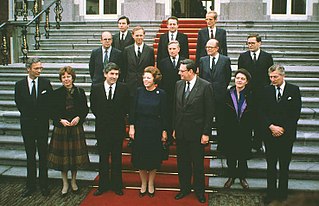 The First Lubbers cabinet was the executive branch of the Dutch Government from 4 November 1982 until 14 July 1986. The cabinet was formed by the christian-democratic Christian Democratic Appeal (CDA) and the conservative-liberal People's Party for Freedom and Democracy (VVD) after the election of 1982. The cabinet was a right-wing coalition and had a substantial majority in the House of Representatives with Christian Democratic Leader Ruud Lubbers serving as Prime Minister. Prominent Liberal politician Gijs van Aardenne a former Minister of Economic Affairs served as Deputy Prime Minister and returned Minister of Economic Affairs. 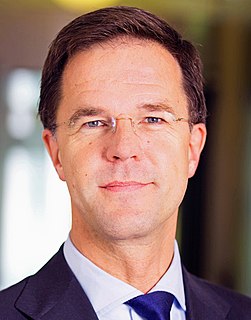 Mark Rutte is a Dutch politician serving as Prime Minister of the Netherlands since 2010 and Leader of the People's Party for Freedom and Democracy (VVD) since 2006.

The formation of a Dutch cabinet is the process of negotiating an agreement that will get majority support in parliament for the appointment of the council of ministers and gives sufficient confidence that agreed policies will be supported by parliament. Dutch cabinet formations tend to be a time-consuming process, and the process is for the most part not codified in the constitution.

The Kingdom of the Netherlands, commonly known as simply the Netherlands, is a sovereign state and constitutional monarchy with 98% of its territory and population in Western Europe and with several small West Indian island territories in the Caribbean. 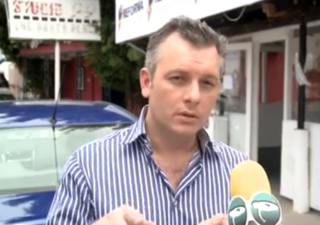 Gerrit Fransisco Schotte is a Curaçaoan politician, and the current leader of the Movementu Futuro Kòrsou (MFK). In the Curaçao general election of 27 August 2010, the MFK became the second-largest party with 5 seats in the Island Council. MFK formed an island government together with Pueblo Soberano and Partido MAN on 4 September. This coalition became the first Cabinet of Curaçao when the Netherlands Antilles was dismantled on 10 October 2010. Schotte at that point became the first Prime Minister of Curaçao.

The first Rutte cabinet, also called the Rutte–Verhagen cabinet was the executive branch of the Government of the Netherlands from 14 October 2010 until 5 November 2012. The cabinet was formed by the conservative-liberal People's Party for Freedom and Democracy (VVD) and the Christian-democratic Christian Democratic Appeal (CDA) after the election of 2010. The cabinet was a right-wing coalition and had a minority in the House of Representatives but had confidence and supply from the Party for Freedom (PVV) for a slim majority with Liberal Leader Mark Rutte serving as Prime Minister. Christian Democratic Leader Maxime Verhagen served as Deputy Prime Minister and Minister of Economic Affairs, Agriculture and Innovation.

Evelyna Christina "Evelyn" Wever-Croes is an Aruban politician and current Prime Minister of Aruba, serving since November 2017. She is the first woman to hold this office. She is a member of the People's Electoral Movement (MEP) and has been the leader of the party since 2011.

Dominico Felipe "Don" Martina is a Curaçaoan politician. He served two terms as Prime Minister of the Netherlands Antilles. His first term lasted from November 1979 to October 1984 and his second term from January 1986 to July 1988.