Below are twelve alphabetical lists of cities in the Netherlands ordered by province.

There are no formal rules in the Netherlands to distinguish cities from other settlements. Smaller settlements are usually called dorp , comparable with villages in English speaking countries. The Dutch word for city is stad (plural: steden). The intermediate category of town does not exist in the Netherlands.

Historically, there existed systems of city rights, granted by the territorial lords, which defined the status of a place: a stad or dorp. Cities were self-governing and had several privileges. In 1851 the granting of city rights and all privileges and special status of cities were abolished. Since then, the only local administrative unit is the municipality. Regardless of this legal change, many people still use the old city rights as a criterion: certain small settlements proudly call themselves a stad because they historically had city rights, while other, newer towns may not get this recognition.

Geographers and policy makers can distinguish between places with respect to the number of inhabitants or the economic and planological functions within a larger area. Hence, settlements can be considered a city if they function as an urban center in a rural area; while larger population centres in densely populated areas are often neither considered a village nor a city and are usually referred to with the generic word plaats (place). Inhabitants may also base their choice of words just on the subjective way they experience life at a certain place. 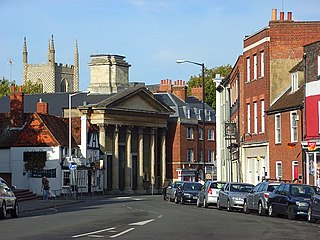 Veghel is a town and a former municipality in the southern Netherlands. On 1 January 2017 Veghel, together with Schijndel and Sint-Oedenrode, merged into a new municipality called Meierijstad creating the largest municipality of the province North-Brabant in terms of land area. 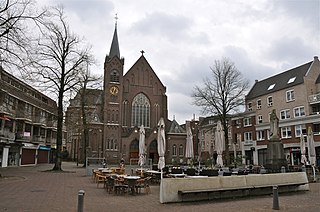 Sint-Oedenrode is a town in the province of North Brabant.

's-Gravenzande is a town in the province of South Holland, in the Netherlands. It is a part of the municipality of Westland, and lies about 12 kilometres (7.5 mi) southwest of The Hague. Until 2004 it was a separate municipality and covered an area of 20.77 km2.

Zoetermeer is a city in the Western Netherlands, in the province of South Holland. The municipality covers an area of 37.05 km2 (14.31 sq mi) of which 2.60 km2 (1.00 sq mi) is water. A small village until the late 1960s, it had 6,392 inhabitants in 1950. By 2013 this had grown to 123,328, making it the third largest population centre in the province of South Holland, after Rotterdam and The Hague. While now a city in its own right, Zoetermeer started out as a The Hague suburb and is still a part of the Greater The Hague urban area.

City rights are a feature of the medieval history of the Low Countries. A liege lord, usually a count, duke or similar member of the high nobility, granted to a town or village he owned certain town privileges that places without city rights did not have. 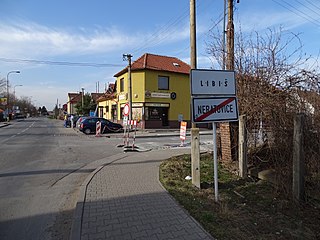 Obec is the Czech and Slovak word for a municipality. The literal meaning of the word is "commune" or "community". It is the smallest administrative unit that is governed by elected representatives. Cities and towns are also municipalities.

City status in Belgium is granted to a select group of municipalities by a royal decree or by an act of law. 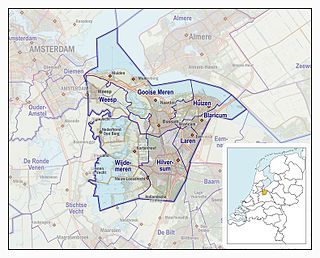 The Gooi is an area around Hilversum, in the centre of the Netherlands. It is a slightly hilly area characterised by its green landscape, its historical charm, the wealth of its inhabitants, and its villas. The Gooi is known in the Netherlands as the home of the rich and famous. 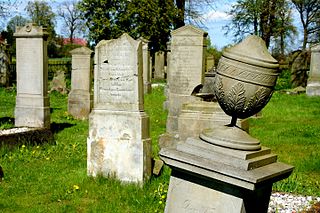 Olęders were people, often of Dutch or German ancestry, who lived in settlements in Poland organized under a particular type of law.

The development of urban centers in the Low Countries shows the process by which the Low Countries, a region in Western Europe, evolved from a highly rural outpost of the Roman Empire into the largest urbanized area north of the Alps by the 15th century CE. As such, this article covers the development of Dutch and Flemish cities beginning at the end of the migration period till the end of the Dutch Golden Age.