The Netherlands, also called Holland, is a country located in Northwestern Europe with some overseas territories in the Caribbean. In Europe, it consists of 12 provinces that border Germany to the east, Belgium to the south, and the North Sea to the northwest, with maritime borders in the North Sea with those countries and the United Kingdom. Together with three island territories in the Caribbean Sea—Bonaire, Sint Eustatius and Saba—it forms a constituent country of the Kingdom of the Netherlands. The official language is Dutch, but a secondary official language in the province of Friesland is West Frisian.

The regions of the Netherlands are divided in the North, South, West and East Netherlands. Opposed to common practise in other countries, the Dutch regularly do not define the areas of their country according to position, but on the overall position of the province—the most western tip of Gelderland is clearly positioned south to the centre, yet because the province is considered East this area is too. 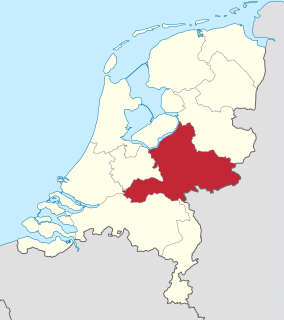 Many regions in the Netherlands are officially defined by certain regulations of organizations.

NUTS-1 Regional divisions as used by the European Union: [1]

EUREGIO is a cross-border region between the Netherlands and Germany and the first Euroregion. It was founded in 1958 as a German Eingetragener Verein, and has been converted in 2016 into a Public Body based on the 1991 Anholt treaty. Participating communities are in Niedersachsen and Nordrhein-Westfalen (Münsterland) in Germany and parts of the Dutch provinces Gelderland, Overijssel and Drenthe. Participating cities in the region are Münster, Osnabrück, Enschede, and Hengelo.

The Ems Dollart Region (EDR), established in 1977, is a cross-border organisation located in the northern Dutch-German border area. The region is named after the Ems River and the Dollart estuary. Its aim is to establish and improve contacts and levels of interaction between people, companies and organisations within the border region. The organization is based in the Dutch village of Bad Nieuweschans. Here, the office has developed into a Dutch-German center, where cross-border functions and other activities take place. The office also serves as an administration base and launching point for many cross-border projects.

Frisia is a coastal region along the southeastern corner of the North Sea in what today is mostly a large part of the Netherlands, including modern Friesland and smaller parts of northern Germany. Frisia is the traditional homeland of the Frisians, Germanic people who speak Frisian languages, which together with Anglic languages form the Anglo-Frisian language group. 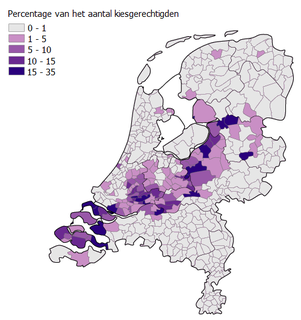 The Bible Belt is a strip of land in the Netherlands with the highest concentration of conservative orthodox Calvinist Protestants in the country. It was named after the Bible Belt of the United States.

The Groene Hart is a relatively thinly populated area in the Dutch Randstad. The major Dutch cities of Rotterdam, The Hague, Leiden, Haarlem, Amsterdam and Utrecht lie around this area. Cities inside the Groene Hart include Zoetermeer, Alphen aan den Rijn, Gouda, Woerden and the smaller cities of Schoonhoven, Oudewater, Haastrecht, Nieuwkoop, Montfoort, Waddinxveen, Bodegraven and Boskoop.

The subregions (Dutch: landstreek (plural: landstreken), literally translating to a combination of 'land/country area/region') are non-administrative area in the Netherlands that can be demarcated on grounds of cohesion with regards to culture or landscape. This means that a landstreek is not bound by provincial or municipal boundaries. Below is a list of all Dutch landstreken with the province(s) in which they are located mentioned between brackets. 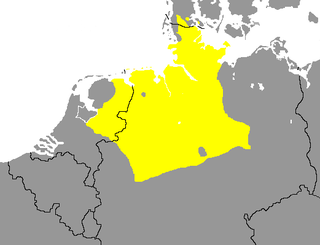 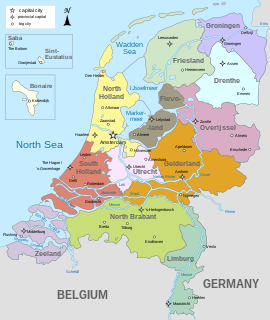 There are currently twelve provinces of the Netherlands, representing the administrative layer between the national government and the local municipalities, with responsibility for matters of subnational or regional importance.

The National Reserve Corps is a part of the Royal Netherlands Army. NATRES is a corps in the sense that it is a regiment which recruits nationally. The part-time reservist is, like all Dutch military personnel, a military volunteer.

The Estates or the States was the assembly of the representatives of the estates of the realm, the divisions of society in feudal times, called together for purposes of deliberation, legislation or taxation. A meeting of the estates that covered an entire kingdom was called an estates general. 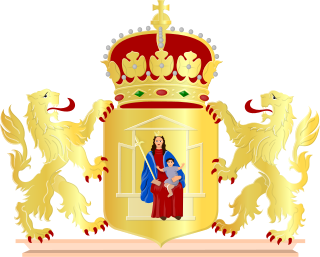 The coats of arms of the twelve provinces of the Netherlands are shown here.

Dutch water boards are regional government bodies charged with managing water barriers, waterways, water levels, water quality and sewage treatment in their respective regions. These regional water authorities are among the oldest forms of local government in the Netherlands, some of them having been founded in the 13th century.

De Hoop is a name used for mills in Belgium and the Netherlands.

Radio Gelderland is a regional public radio station for the Dutch province of Gelderland. Its history started in 1965 when Gelderland joined the RONO. The RONO was already broadcasting for the north and east of the Netherlands. In 1977 RONO split into Radio Noord for Groningen and Drenthe, Radio Fryslân for Friesland and Radio Oost for Overijssel and Gelderland. Since 1985 Radio Gelderland is an independent broadcaster.

The Dutch Amateur Radio Emergency Service (DARES), which was founded on 12 May 2004, is a non-profit organization made out of licensed radio amateurs in the Netherlands. DARES participants are able to set up a national, continental or international radio network in case of an emergency situation, like a power outage on a large scale, a flooding, a cyber attack causing severe damage to communication networks, or other emergency situations, where the safety of a large group of people are in danger.