This is a list of the Regierungschef (Heads of Government or Prime Ministers) of Liechtenstein.

The current head of government is Adrian Hasler, since 27 March 2013.

Hans Brunhart is a political figure from Liechtenstein. Brunhart served as the head of government of Liechtenstein from 1978 to 1993. 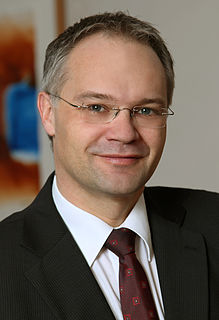 Klaus Tschütscher is a politician of the Principality of Liechtenstein. He was the twelfth Prime Minister of Liechtenstein from 25 March 2009 until being succeeded in this capacity on 27 March 2013. His Ministries were General Government Affairs, Finance, Family Affairs and Gender equality. Tschütscher belongs to the Patriotic Union-party.

Mario K. Frick is a former Head of Government (Regierungschef) of Liechtenstein and attorney-at-law.

Gerard Batliner was a political figure from Liechtenstein.

Dr. Alexander Frick was a political figure from Liechtenstein.

Markus Büchel was a former head of government of Liechtenstein.

Felix Hollenstein is a former Swiss ice hockey player, who became four times Swiss champion with the EHC Kloten in the Nationalliga A. In his career, Hollenstein played 650 matches in the NLA and 131 for Switzerland men's national ice hockey team, where he scored 47 goals.

Josef Ospelt was the first Prime Minister of Liechtenstein from 2 March 1921 to 27 April 1922. 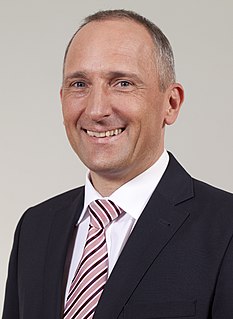 Heinz Ehlers is a Danish professional ice hockey coach and former ice hockey player. He is currently the head coach of the SCL Tigers in the National League A (NLA) and the Denmark national hockey team.

The Swiss Independence Party up!, also known as up! Switzerland, is a libertarian political party in Switzerland formed on 18 June 2014. It is the main founder of the International Alliance of Libertarian Parties.

Freedo is a songwriter, record producer, and DJ, originally from Glarus, Switzerland. He often works with German producer Shuko. Freedo is known for producing Zara Larsson's single "Lush Life", The Chainsmokers's single "Takeaway" and remixing Coldplay's "Up & Up".

Andrea Willi is a politician from Liechtenstein, first woman to hold the office of Minister of Foreign Affairs, in the government of Prime Minister Mario Frick, between 15 December 1993 and 5 April 2001. She is member of Patriotic Union. Willi got a doctorate in Philosophy in Philosophy at the University of Zurich. 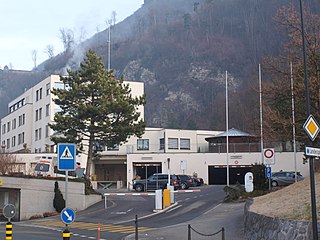 The COVID-19 pandemic was confirmed to have reached Liechtenstein in early March 2020. With total population of 38,749, in 29 March infection rate is 1 case per 472 inhabitants.