The head of government of the Principality of Andorra (Catalan : Cap de Govern del Principat d'Andorra), alternatively known as the prime minister of Andorra, is the chief executive of the government of Andorra. They are appointed by the General Council. The position was created in 1982 after constitutional reforms separated the executive and legislative powers. Òscar Ribas Reig was elected as the country's first prime minister on 4 January 1982. [2] The current prime minister is Xavier Espot Zamora, who has been in office since 16 May 2019. [3]

Andorra, officially the Principality of Andorra, is a sovereign landlocked microstate on the Iberian Peninsula, in the eastern Pyrenees, bordered by France to the north and Spain to the south. Believed to have been created by Charlemagne, Andorra was ruled by the count of Urgell until 988, when it was transferred to the Roman Catholic Diocese of Urgell. The present principality was formed by a charter in 1278. It is headed by two co-princes: the bishop of Urgell in Catalonia, Spain and the president of France. Its capital and largest city is Andorra la Vella.

The General Council is the unicameral parliament of Andorra. It is sometimes referred to as the General Council of the Valleys because it was the historical name and to distinguish it from similarly named bodies in the Val d'Aran and in France. 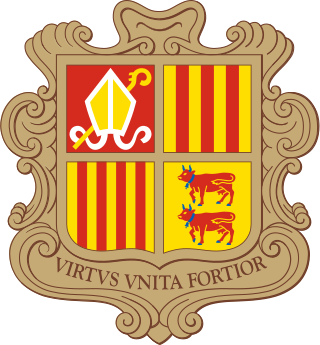 The Ministry of Foreign Affairs is the Andorran government ministry which oversees the foreign relations of Andorra.

Antoni Martí Petit is an Andorran architect and politician who served as the prime minister of Andorra from May 2011 to 16 May 2019, when he was elected on the ticket of the Democrats for Andorra. He was re-elected in the 2015 parliamentary election.

Sílvia Riva González is an Andorran politician and notary.

The Ministry of Social Affairs, Justice and Interior of Andorra is responsible for social care and protection, employment and work. The ministry aims to guarantee the internal security of citizens and their assets, civil status, the regulation of migration and integration policy to guarantee social cohesion, the fight against crime, international collaboration in matters judicial and police, and protecting the population from any natural risk or catastrophe.

Sílvia Calvó i Armengol is an Andorran environmental engineer, current Minister of Environment, Agriculture and Sustainability of Andorra, since 1 April 2015.

Parliamentary elections were held in Andorra on 7 April 2019, electing all 28 seats of the General Council. Although they remained the largest party, the Democrats for Andorra lost their parliamentary majority after losing four seats. The Social Democratic Party gained four seats, becoming the second-largest party. 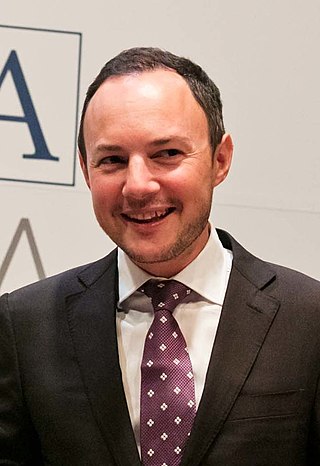 Xavier Espot Zamora is an Andorran judge and politician. He is a former minister of justice and the current prime minister of Andorra since 16 May 2019.

Maria Ubach i Font is an Andorran diplomat, serving as the Minister of Foreign Affairs since 17 June 2017 under the governments of Prime Minister Antoni Martí and the current Head Xavier Espot.

Verònica Canals i Riba is an Andorran business manager and politician who served as Minister of Tourism since 21 May 2019 under the Premiership of Xavier Espot.

Ester Vilarrubla Escales, is an Andorran politician and educator, who as served as Minister of Education and Higher Education in the government of Xavier Espot since 22 May 2019.

Judith Pallarés i Cortés, is an Andorran politician, since 22 May 2019 Minister of Civil Service and Reform of the Administration in the government of Xavier Espot.

Events in the year 2020 in the Principality of Andorra.

The COVID-19 pandemic in Andorra is part of the worldwide pandemic of coronavirus disease 2019 caused by severe acute respiratory syndrome coronavirus 2. The virus was confirmed to have reached Andorra on 2 March 2020, when a 20-year-old man returned to the country from Milan, Italy. With a total population of 77,543, on 7 December 2020, the infection rate was 1 case per 11 inhabitants, and the death rate was 1 case per 994 inhabitants.

Parliamentary elections are scheduled to be held in Andorra by April 2023.