Estonia is one of the few parliamentary republics in which the president is a ceremonial figurehead without even nominal executive powers. The president is obliged to suspend their membership in any political party for the term in office. Upon assuming office, the authority and duties of the president in all other elected or appointed offices terminate automatically. These measures should theoretically help the president to function in a more independent and impartial manner. The president holds office for five years. They may be elected any number of times, but not more than twice consecutively.

While this election process has been criticised, the idea of direct elections does not have enough support in parliament, with only Estonian Centre Party and Conservative People's Party defending it. [5] [4] [6] [7]

The authors of the first Estonian constitution, with memories of the Russian emperors' abuses of power, tried to avoid concentrating too much power in one person's hands by all means possible. This eventually led to a creation of an ultra-parliamentary system. The power of the Parliament (Riigikogu) was practically unlimited. Until 1934, the nominal head of state was the State Elder, (riigivanem), who also served as de jure chairman of the cabinet—officially known as "the Government." However, he could not play a balancing role in the event of conflict between the Parliament and the Government. The State Elder and the Government were completely dependent on the Parliament and could be sacked by it at any time. The functions that are usually vested on a president in parliamentary systems were divided among the speaker of the Riigikogu, the State Elder and the Government.

Estonia's constitution was amended in 1933, instituting a strongly presidential system. The head of state, according to the new constitution, was also called the State Elder, but this time was vested with sweeping executive powers. However, it never came into effect as a result of Konstantin Päts's self-coup in 1934. In 1938, another constitution was enacted, and the head of state's title was changed to "President of the Republic." He was given very broad executive power, though he was somewhat less powerful than the State Elder of the 1933 constitution. Konstantin Päts became the first person to bear this title. His term was to last for six years.

Within days after the Soviet military occupation of Estonia in June 1940, Päts was forced to appoint a Communist-dominated puppet government headed by Johannes Vares, following the arrival of demonstrators accompanied by Red Army troops with armored vehicles to the Presidential palace. The Vares government had actually been chosen by Soviet official Andrei Zhdanov. Following the sham elections in July, president Päts was dismissed from office. Later in July Päts, along with his son, daughter-in-law and two grandsons, was deported to Ufa in Russia.

According to the 1938 constitution, in case the president was ever incapacitated, or was otherwise unable to carry out his functions, his duties were to be assumed by the prime minister under the title "Prime Minister in duties of the President." Following this provision, Vares nominally took over the functions of the president for a few weeks during the Soviet occupation until Estonia was annexed and formally incorporated into the Soviet Union in August 1940. However, during times of war or incapacitation lasting longer than six months, the constitution provides for the election of an acting president by the Electoral Council. In a secret meeting on 20 April 1944, the Electoral Council determined that the appointment of Vares as prime minister in 1940 had been unlawful according to the 1938 constitution. The council elected Jüri Uluots as acting president on 21 April. Uluots appointed Otto Tief as prime minister. Tief was subsequently arrested by the re-occupying Soviet forces in September 1944.

In September 1944, Uluots and the surviving members of the Tief government escaped to Sweden. The day before Uluots died in January 1945, a successor, August Rei, was named to assume the position of acting president. Following Rei's death in 1963, the role passed to Aleksander Warma, then to Tõnis Kint in 1971, then to Heinrich Mark in 1990. In October 1992, Mark handed over his credentials to the newly elected president of the restored republic, Lennart Meri.

After Estonia regained independence, a new constitution was adopted in 1992 that was based on a mixture of the 1920 and 1938 documents. During the drafting of the new constitution, it was initially planned to use the older, more traditional title, State Elder, for the head of state. However, the more modern term "president" was eventually chosen after public consultations. Since the adoption of the 1992 constitution, seven presidential elections have taken place (in 1992, 1996, 2001, 2006, 2011, 2016, 2021). Lennart Meri was elected in 1992 (this election, unlike later ones, had a public round) and re-elected in 1996, defeating Arnold Rüütel both times. Rüütel himself became the next president in 2001. In 2006, Toomas Hendrik Ilves won the election in the electoral assembly, and he was reelected by the parliament in 2011. In 2016, Kersti Kaljulaid was elected president only after the parliament, and then the electoral assembly too, had failed to elect one, and the election had passed back to the parliament. Alar Karis was elected president by the parliament in 2021.

The president of the Republic of Estonia:

Unlike their counterparts in other parliamentary republics, the president is not even the nominal chief executive. Rather, the Constitution explicitly vests executive power in the Government. 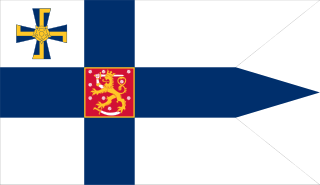 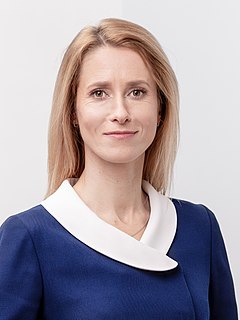 The Prime Minister of Estonia is the head of government of the Republic of Estonia. The prime minister is nominated by the president after appropriate consultations with the parliamentary factions and confirmed by the parliament (Riigikogu). In case of disagreement, the Parliament can reject the president's nomination and choose their own candidate. In practice, since the prime minister must maintain the confidence of Parliament in order to remain in office, they are usually the leader of the senior partner in the governing coalition. The current prime minister is Kaja Kallas of the Reform Party. She took the office on 26 January 2021 following the resignation of Jüri Ratas.

The Riigikogu is the unicameral parliament of Estonia. All important state-related questions pass through the Riigikogu. In addition to approving legislation, the Riigikogu appoints high officials, including the Prime Minister and Chief Justice of the Supreme Court, and elects the President. The Riigikogu also ratifies significant foreign treaties that impose military and proprietary obligations, bring about changes in the law, etc.; approves the budget presented by the government as law and monitors the executive power.

Konstantin Päts was an Estonian statesman and the country's President in 1938–1940. Päts was one of the most influential politicians of independent Estonia, and during the two decades prior to World War II he also served five times as the country's Prime Minister. 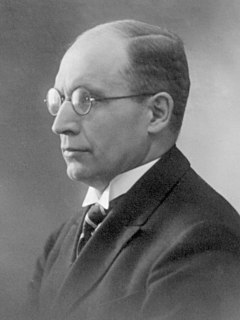 Johannes Vares was an Estonian and Soviet poet, medical doctor, and politician. 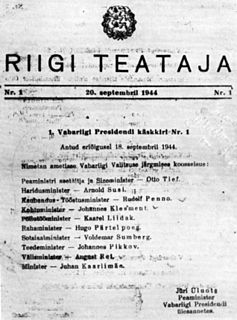 The National Committee of the Republic of Estonia was a deliberative and legislative body, formed by the government of Republic of Estonia to control the resistance movement in German-occupied Estonia in March 1944. By April 1944 a large number of the committee members were arrested by the German security agencies.

The Vares Government was a puppet government installed by the Soviet Union in Estonia, in office from 21 June 1940 to 25 August 1940. 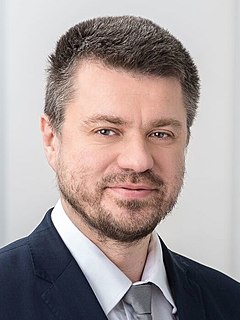 Urmas Reinsalu is an Estonia politician serving as the minister of foreign affairs since 18 July 2022 and previously between April 2019 and 26 January 2021. Before that, Ummi has served as the minister of defence between 2012 and 2014, and minister of justice from 2015 to 2019. Reinsalu is a member of the Isamaa ("Fatherland") political party, and was the party leader from 2012 to 2015.

Parliamentary elections were held in Estonia on 14 and 15 July 1940 alongside simultaneous elections in Latvia and Lithuania. The elections followed the Soviet occupation of the three countries. As was the case in Latvia and Lithuania, the elections in Estonia were blatantly rigged. They were also unconstitutional, since only seats for the lower chamber of the Riigikogu, the Chamber of Deputies, were contested; the upper chamber, the National Council, was never reconvened. According to August Rei, one of independent Estonia's last envoys to Moscow, under the Estonian constitution, the Chamber of Deputies had "no legislative power" apart from the National Council.

An indirect election took place in Estonia on 30 and 31 August 2021 to elect the president of Estonia, who is the country's head of state. The Riigikogu — the Parliament of Estonia — elected Alar Karis to serve in the office and he was sworn in as the 6th president on 11 October 2021. The incumbent, Kersti Kaljulaid, was eligible to seek reelection to a second, and final, term but failed to gain the endorsement of at least 21 MPs, which is required in order for a candidate to register.

The Estonian presidential election is an indirect election in which the President of Estonia is elected. The first round was held on August 26, 1996, the second and third round on August 27, 1996. As no one reached a sufficient majority in the closed ballot vote of the Riigikogu, the next stage was held on September 20 at the Constituent Assembly. Seated President Lennart Meri was elected for a further term.