Philippe or Filip (Dutch : Filip Leopold Lodewijk Maria [ˈfilɪp ˈleːjoːpɔlt ˈloːdəʋɛik maːˈrijaː] ; French : Philippe Léopold Louis Marie [filip leɔpɔld lwi maʁi] ; born 15 April 1960) is King of the Belgians. He is the eldest child of King Albert II and Queen Paola. He succeeded his father upon the latter's abdication for health reasons on 21 July 2013. He married Mathilde d'Udekem d'Acoz in 1999, with whom he has four children. Their eldest child, Princess Elisabeth, is first in the line of succession.

Philippe was born on 15 April 1960 at the Belvédère Castle in Laeken north of Brussels. His father, Prince Albert, Prince of Liège (later King Albert II), was the second son of King Leopold III of Belgium and a younger brother of Baudouin. His mother, Paola, Princess of Liège (later Queen Paola), is a daughter of the Italian aristocrat Fulco VIII, Prince Ruffo di Calabria, 6th Duke of Guardia Lombarda. His mother descends from the French House of La Fayette, and the king is a descendant of Gilbert du Motier, Marquis de Lafayette, and Marie Adrienne Françoise de Noailles [ citation needed ].

Philippe was baptised one month later at the church of Saint Jacques-sur-Coudenberg in Brussels on 17 May, [1] and named Philippe after his great-great-grandfather Prince Philippe, Count of Flanders. His godparents were his paternal grandfather, King Leopold III, and his maternal grandmother, Donna Luisa, Princess Ruffo di Calabria. [2]

Albert and Paola's marriage was unhappy, and they were usually absent from Philippe's life. The child neglect was so severe that child psychologist Peter Adriaenssens  [ nl ] described it as justifying intervention by social workers. [3]

The King has a half-sibling, Princess Delphine of Belgium (born 1968).

As a child the future king was required to transfer from a French-language school, where he was purportedly happy, to a secondary school in Flanders, where he found it difficult to make friends. “In my youth, I had many problems at school” Philippe told a group of teenage dropouts in 2019. “I felt badly treated. It was not easy for me”. [4]

From 1978 to 1981, Philippe was educated at the Belgian Royal Military Academy in the 118th "Promotion Toutes Armes" (Promotion All Weapons). On 26 September 1980, he was appointed second lieutenant and took the officer's oath. [5]

Philippe continued his education at Trinity College, Oxford, and he attended graduate school at Stanford University, California, where he graduated in 1985 with an MA degree in political science. [5] He obtained his fighter pilot's wings and his certificates as a parachutist and a commando. In 1989, he attended a series of special sessions at the Royal Higher Defence Institute. The same year, he was promoted to colonel.

Philippe married Mathilde d'Udekem d'Acoz, daughter of a Walloon count of a Belgian noble family and female line descendant of Polish noble families such as the princes Sapieha and counts Komorowski, on 4 December 1999 in Brussels, in a civil ceremony at the Brussels Town Hall and a religious ceremony at the Cathedral of Saint Michel and Saint Gudule in Brussels. They have four children:

In this capacity, Philippe has headed more than 60 economic missions. [7] [8] Upon his accession as seventh King of the Belgians, this role was taken over by his sister Princess Astrid.

King Albert II announced on 3 July 2013 that he would abdicate in favour of Philippe on 21 July 2013. [9] Approximately one hour after King Albert II's abdication, Prince Philippe was sworn in as King of the Belgians. [10] His eldest child, Princess Elisabeth, became his heir apparent and is expected to become Belgium's first queen regnant.

Philippe played a role in forming a coalition government after the 2014 Belgian federal election. [11] Political meetings with the King were moved from the Palace of Laeken to the Royal Palace of Brussels. [11] In May 2019, Philippe met with Vlaams Belang President Tom Van Grieken, the first time the party had received a royal audience. [11] [12]

In 2020, Philippe announced regret for the "acts of violence and cruelty" committed in Belgian Congo. [11] 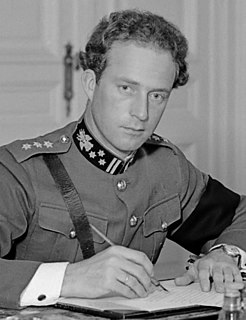 Leopold III was King of the Belgians from 23 February 1934 until his abdication on 16 July 1951. At the outbreak of World War II, Leopold tried to maintain Belgian neutrality, but after the German invasion in May 1940, he surrendered his country, earning him much hostility, both at home and abroad.

Belgium is a constitutional, hereditary, and popular monarchy. The monarch is titled king or queen of the Belgians and serves as the country's head of state. There have been seven kings since independence in 1830.

Prince Laurent of Belgium is the second son and youngest child of King Albert II and Queen Paola, and younger brother of King Philippe. Laurent's involvement with animal welfare and the environment, together with a relative lack of interest in protocol, has caused him to be dubbed by elements of the popular Belgian press as écolo-gaffeur. Currently, he is 13th in the Belgian line of succession. He had been as high as third in line, but the constitution was amended in 1991 to extend an equal right of succession to women, putting him behind his sister, Princess Astrid, and her descendants.

Princess Astrid of Belgium, Archduchess of Austria-Este, is the second child and first daughter of King Albert II and Queen Paola, and the younger sister to the current Belgian monarch, King Philippe. She is married to Prince Lorenz of Belgium, head of the Austria-Este branch of the House of Habsburg-Lorraine, and is fifth in line of succession to the Belgian throne.

Paola is a member of the Belgian royal family who was Queen of the Belgians during the reign of her husband, King Albert II, from 9 August 1993 to 21 July 2013. 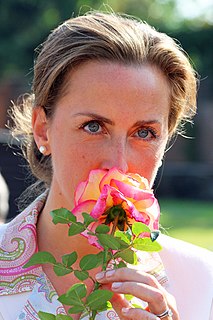 Princess Claire of Belgium is a British-Belgian land surveyor. She has been married to Prince Laurent since 2003 and is the sister-in-law of King Philippe of Belgium.

Mathilde is Queen of the Belgians as the wife of King Philippe. She is the first native-born Belgian queen. She has founded and assisted charities to decrease poverty in the country.

Prince Gabriel of Belgium is the elder son and second child of King Philippe and Queen Mathilde of Belgium. He is currently second in line to the throne of Belgium after his elder sister, Elisabeth.

Princess Elisabeth, Duchess of Brabant is the heir apparent to the Belgian throne. The eldest child of King Philippe and Queen Mathilde, she acquired her position after her grandfather King Albert II abdicated in favour of her father on 21 July 2013.

Princess Delphine of Belgium, known previously as JonkvrouwDelphine Boël, is a Belgian artist and member of the Belgian royal family. She is the daughter of King Albert II of Belgium with Baroness Sybille de Selys Longchamps, and the half-sister of King Philippe of Belgium. On 1 October 2020, she was lawfully recognised as Princess of Belgium with the style "Her Royal Highness". Earlier, she had belonged to the Belgian titled nobility and was legally Jonkvrouw.

Prince Emmanuel of Belgium is the younger son and third child of King Philippe and Queen Mathilde of Belgium. He is currently third in line to the throne of Belgium after his elder sister, Princess Elisabeth, and brother, Prince Gabriel.

Prince Philippe of Belgium, Count of Flanders, was the third born and second surviving son of King Leopold I of Belgium and Louise d'Orléans. He was the brother of Leopold II of Belgium and Empress Carlota of Mexico.

The Palace of Laeken or Castle of Laeken is the official residence of the King of the Belgians and the Belgian Royal Family. It lies in the Brussels-Capital Region, 5 km (3 mi) north of the city centre, in Laeken, and sits in a large private park called the Royal Domain of Laeken.

Louis-Philippe, Crown Prince of Belgium, was the eldest child and heir-apparent of King Leopold I of the Belgians and his second wife, Princess Louise d'Orléans.

Prince Baudouin of Belgium was the first child and eldest son of Prince Philippe, Count of Flanders, and his wife, Princess Marie of Hohenzollern-Sigmaringen. After Baudouin's death, his younger brother eventually became heir presumptive after the death of their father, and later succeeded their uncle Leopold II as Albert I of Belgium.

Princess Eléonore of Belgium is the younger daughter and the youngest of four children of King Philippe and Queen Mathilde of Belgium. She is currently fourth in line to the throne of Belgium after her older siblings Princess Elisabeth, Duchess of Brabant, Prince Gabriel, and Prince Emmanuel. She likes to play violin and to draw.

The wedding of Prince Philippe, Duke of Brabant, and Mathilde d'Udekem d'Acoz took place on 4 December 1999 in Brussels, Belgium. The civil proceedings were conducted at Brussels Town Hall while the religious ceremony took place at the Cathedral of Saint Michel. The wedding has been described as the social event of the decade within Belgium and it was the last royal wedding of the second millennium. 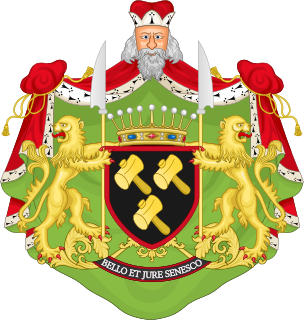 The House d'Udekem is the name of a noble family that belongs to the nobility of Belgium since 1816.

Wikiquote has quotations related to Philippe of Belgium .

Wikimedia Commons has media related to Philippe of Belgium .
This page is based on this Wikipedia article
Text is available under the CC BY-SA 4.0 license; additional terms may apply.
Images, videos and audio are available under their respective licenses.