Counties (Estonian : maakond, plural maakonnad) are the first-level administrative subdivisions of Estonia. Estonian territory is composed of 15 counties, including 13 on the mainland and 2 on islands. The government (maavalitsus) of each county is led by a maavanem (governor) who represents the national government (Vabariigi Valitsus) at the regional level. Governors are appointed by the national government for a term of five years.

The number and name of the counties were not affected. However, their borders were changed by the administrative reform at the municipal elections Sunday 15 October 2017, which brought the number of municipalities down from 213 to 79.

In the first centuries AD,[ citation needed ] political and administrative subdivisions began to emerge in Estonia. Two larger subdivisions appeared: the parish (kihelkond) and the county (maakond). The parish consisted of several villages. Nearly all parishes had at least one fortress. The defence of the local area was directed by the highest official, the parish elder. The county was composed of several parishes, also headed by an elder. By the 13th century the following major counties had developed in Estonia: Saaremaa (Osilia), Läänemaa (Rotalia or Maritima), Harjumaa (Harria), Rävala (Revalia), Virumaa (Vironia), Järvamaa (Jervia), Sakala (Saccala), and Ugandi (Ugaunia). [4] Additionally there were several smaller elderships in central Estonia where danger of war was smaller – Vaiga, Mõhu, Nurmekund and Alempois. The exact number and borders of some elderships are disputed.

The first documented mentioning of Estonian political and administrative subdivisions comes from the Chronicle of Henry of Livonia, written in the 13th Century during the Northern Crusades.

The autonomy of the Estonian counties and parishes ended after conquered and divided between Denmark, Livonian Order, Bishopric of Dorpat and Bishopric of Ösel-Wiek. The name of Rävala became Reval, replacing the name of an Estonian town Lindanisse, later Tallinn. Ugandi, Sakala and the smaller elderships disappeared from common usage.

In the 1580s, after the Livonian war as Sweden had conquered Northern Estonia, Harju, Järva, Lääne and Viru counties were officially formed there. Southern Estonia, which belonged to Poland 1582–1625, was divided into voivodships of Pärnu and Tartu; the island of Saaremaa belonged to Denmark until 1645. They all became counties as they went under Swedish rule.

This administrative system mostly remained as Estonia went under Russian rule due to the Northern War. In 1793 were formed Võru County in the south of Tartumaa, Viljandi County between Tartu and Pärnu counties, and Paldiski County in the west of Harjumaa. In 1796 Paldiski County was joined with Harjumaa again. Until 1888 Võrumaa and Viljandimaa were not wholly independent from Tartumaa and Pärnumaa, respectively.

Several changes were made to the borders of counties after Estonia became independent, most notably the formation of Valga County (from parts of Võru, Tartu and Viljandi counties) and Petseri County (area acquired from Russia with the 1920 Tartu peace treaty).

During Soviet rule, Petseri County became a part of Russia in 1945. Hiiumaa seceded from Läänemaa in 1946, Jõgevamaa from Tartumaa in 1949 and Jõhvimaa (modern Ida-Virumaa) from Virumaa in 1949. Counties were completely dissolved in 1950 as Estonian SSR was divided into raions (rajoonid) and (until 1953) oblasts. Until the 1960s, the borders of raions often changed until 15 of them were left. Out of them, Põlva and Rapla regions became separate, while the others were roughly corresponding to the pre-1950 counties.

Counties were re-established on 1 January 1990 in the borders of the Soviet-era raions. Due to the numerous differences between the current and historical (pre-1940) layouts, the historical borders are still used in ethnology, better representing cultural and linguistic differences.

A municipality is the smallest administrative subdivision of Estonia. Each municipality is a unit of self-government with its representative and executive bodies. The municipalities in Estonia cover the entire territory of the country.

Ida-Viru County is one of 15 counties of Estonia. It is the most north-eastern part of the country. The county contains large deposits of oil shale - the main mineral mined in Estonia. Oil shale is used in the production of shale oil and in thermal power plants. The capital of the county is the town of Jõhvi which is administratively united with the Jõhvi Parish; nevertheless, Narva is the largest town in the county in terms of population and at the same time the third largest city in Estonia after Tallinn and Tartu. 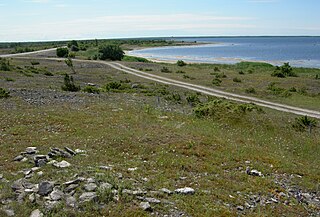 Valga County is a first-level administrative unit and one of 15 counties of Estonia. It comprises the former area of Valga District. The present-day county was created on 1 January 1990. The capital and largest town of Valga County is Valga, followed by Tõrva and Otepää. It is situated in the southern part of the country and borders Põlva and Võru County to the east, Latvia to the south and west, and Viljandi and Tartu County to the north. 29,944 people live in Valga County.

Võrumaa was a historical county in Estonia. The historical Võrumaa includes the areas of the present counties of Võru, Põlva, Valga and Tartu.

Ugandi was an independent county between the east coast of Lake Võrtsjärv and west coast of Lake Pskov, bordered by Vaiga, Mõhu, Nurmekund, Sakala, Tālava, and The Principality of Pskov. Ugandi had an area of approximately 3000 hides. Ugandi corresponded roughly to the present Estonia's territory of Võru County, Põlva County and half of Tartu County and Valga County, as well as Petseri County.

The flags of the 15 counties of Estonia are all white and green, with the coat of arms of the respective county on the white part. This design was first established in 1938. The list also includes the historical flag of Petseri County, which in 1944 was occupied by Soviet forces and became Pechorsky District in Pskov Oblast, present-day Russia. The district was claimed by Estonia after the re-establishing of independence in 1991, but the claim was dropped in 1995.

The coats of arms of the 15 counties of Estonia are presented below.

The Estonian Border Guard was the national security agency responsible for the border security of Estonia. It was subordinate to the Ministry of the Interior. The Border Guard also assisted with Search and Rescue missions. In 2010, the organization was superseded by the Police and Border Guard Board.

Schutzmannschaft Battalion 33 was a unit of the Estonian Auxiliary Police subordinated to the German Ordnungspolizei during World War II. 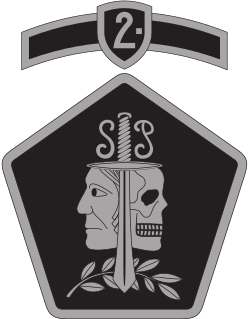 The 2nd Infantry Brigade is an infantry brigade of the Estonian Land Forces. It is the primary military unit in Southern Estonia. The brigade headquarters is currently based at Sirgu village, Luunja Parish, Tartu County. The brigade is tasked with planning and organizing military operations, planning and organizing mobilization, ensuring the readiness and support of its subordinate units, preparing wartime reserve units and their formation, organizing the training and participation in international military operations.

Anton Lembit Soans was an Estonian architect, urban planner and lecturer. He was one of the founding members of the Estonian Architects Union.