^1 Almaty, Nur-Sultan and Shymkent cities have the status of State significance and do not relate to any region.
^2 The West Kazakhstan and Atyrau regions are both partly located in Eastern Europe as the Ural River run through Atyrau and Oral, their respective capital cities.
^3 Baikonur city has a special status because it is currently being leased to Russia with Baikonur Cosmodrome until the year 2050.

Over the last 60 years, both the distribution and names of regions of Kazakhstan have changed considerably. Major changes were several fusions and splits between Guryev and Mangystau, Karaganda and Dzhezkazgan, Almaty and Taldy-Kurgan, East Kazakhstan and Semipalatinsk and Kostanay, Turgay and Tselinograd, respectively. Changes in region names were often in line with the renaming of cities, such as in the case of Alma-Ata/Almaty. After the administrative reform in 1997, the last change happened since then took place in 1999, when parts of North Kazakhstan that originally belonged to Kokshetau region became part of Akmola. The 1990s merges were in order to dilute Russian population in the resulting region and to avoid having regions where Russians form a majority. [3]

Kazakhstan, officially the Republic of Kazakhstan, is a transcontinental country mainly located in Central Asia with a smaller portion west of the Ural River in Eastern Europe. It covers a land area of 2,724,900 square kilometres (1,052,100 sq mi), and shares land borders with Russia in the north, China in the east, and Kyrgyzstan, Uzbekistan, and Turkmenistan in the south while also adjoining a large part of the Caspian Sea in the southwest. Kazakhstan does not border Mongolia, although they are only 37 kilometers apart, separated by a short portion of the border between Russia and China.

The vast territory of Kazakhstan spans across 2,700,000 km2 (1,000,000 sq mi). The population density is low in Kazakhstan, and the centers of industry and agriculture are spread out and remote from world markets.

Nūr-Sūltan is the capital city of Kazakhstan. It was known between 1998 and 2019 as Astana and before that as Akmola. On 23 March 2019, following an unanimous vote in Kazakhstan's parliament, the city was renamed to Nur-Sultan, after former Kazakhstani President Nursultan Nazarbayev. 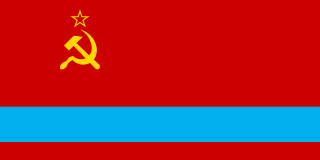 The Kazakh Soviet Socialist Republic was one of the transcontinental constituent republics of the Soviet Union from 1936 to 1991 in northern Central Asia. It was created on 5 December 1936 from the Kazakh ASSR, an autonomous republic of the Russian SFSR.

Kokshetau, formerly known as Kokchetav (1827–1993), is a city in northern Kazakhstan and the capital of Akmola Region, lying in the north of Kokshetau Uplands, on the southern shore of Lake Kopa and the southern edge of the Ishim Steppe. Earlier, it was the centre of Kokshetau Region, which was abolished in 1997. It is also situated at the junction of the Trans-Kazakhstan and South Siberian railways. Kokshetau lies at an elevation of approximately 234 m (768 ft) above sea level. 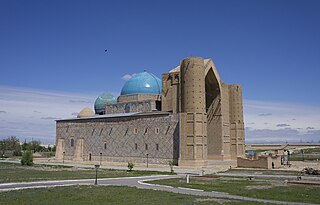 Turkistan, is a city and the administrative center of Turkistan Region of Kazakhstan, near the Syr Darya river. It is situated 160 km (100 mi) north-west of Shymkent on the Trans-Aral Railway between Kyzylorda to the north and Tashkent to the south. Its population has increased within ten years from 102,505 to 142,899 . Turkistan's most prominent historical and cultural asset is the Mausoleum of Khoja Ahmed Yasawi, a UNESCO World Heritage site. The city is served by Hazrat Sultan International Airport.

Turkistan Region, previously South Kazakhstan Region, is the southernmost region of Kazakhstan. Its capital is Turkistan. Other cities in Turkistan Region include Sayram, Kentau, Arys, Shardara, Zhetisay, Saryagash, and Lenger. This region and Atyrau Region are Kazakhstan's two smallest regions; both are about 117,300 square kilometers in area. Population: 2,469,367 ; 1,978,339 . 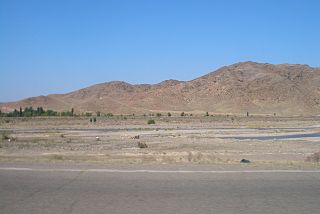 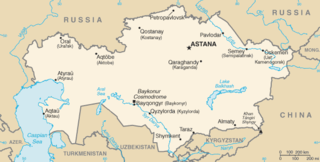 Kazakh wine is wine made in Kazakhstan. The roots of the Kazakh wine industry can be traced to the 7th century AD when grapevines were brought to the region from neighboring Uzbekistan and China. While only around 4% of the land in Kazakhstan is ideally situated for viticulture, the country does manage to produce over 6.2 million gallons of wine annually from 32,120 acres (13,000 ha). Buoyed by its mineral wealth, the country is an enthusiastic consumer of wine but must import 80% of the 30 m bottles it drinks.

Standard time in Kazakhstan is either UTC+05:00 or UTC+06:00. These times apply throughout the year as Kazakhstan does not observe Daylight saving time.

The Nazarbayev Intellectual Schools (NIS) is a network of schools for exceptional students of age 5 to 18 throughout Kazakhstan. The schools are named after Nursultan Nazarbayev, former president of Kazakhstan, who has promoted the idea as a means of developing the intellectual life of the country. Previously, each school focused primarily on a specific set of subjects: either physical sciences and mathematics, or chemical and biological sciences, as well as foreign languages. Although this division is still represented in the names of schools, most schools share the same curriculum based on Cambridge O Level and A Level, except for NIS IB in Nur-Sultan. Instruction is trilingual, in Kazakh, Russian and English, shifting to exclusively English by the junior year.

Qazaqstan is the Kazakhstani state television broadcaster. It started broadcasting on March 8, 1958. It is a part of the Qazaqstan Radio and Television Corporation. The station broadcasts around the clock in the Kazakh language.

Şymkent, known until 1993 as Chimkent ; Russian: Чимкент, romanized: Čimkent ), is a city in Kazakhstan. It is near the border with Uzbekistan. It is one of three Kazakh cities which have the status equal to that of a region. It is the third most populous city in Kazakhstan, behind Almaty and Nur-Sultan, with an estimated population of 1,002,291 as of June 1, 2018. According to regional and city officials, the millionth resident of Shymkent was born on 17 May 2018. It is a regional cultural centre.

The 2018–2020 Kazakh protests were a series of civil protests that took place in cities across Kazakhstan, commencing in May 2018 and gaining a traction after a fire in Nur-Sultan killed five children in February 2019. Some commentators attribute President of Kazakhstan Nursultan Nazarbayev's decision to dismiss the government of Prime Minister Bakhytzhan Sagintayev later that month in part to the protests. Nazarbayev later himself resigned on 19 March 2019 and was replaced as president by Kassym-Jomart Tokayev, the speaker of the upper house of parliament. Nazarbayev continued to hold several political positions. Tokayev called a snap election, the 2019 Kazakh presidential election, which saw him elected with over 70% of the vote. Both the run-up to and the aftermath of the election saw further protests. 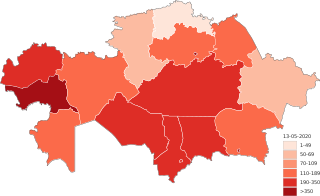 The COVID-19 pandemic in Kazakhstan is part of the worldwide pandemic of coronavirus disease 2019 caused by severe acute respiratory syndrome coronavirus 2. The virus was confirmed to have reached Kazakhstan on 13 March 2020. It involved two Kazakh citizens in Almaty who were recently returned from Germany. That same day, two more cases were confirmed with one female arriving from Italy in Nur-Sultan and the other from Germany in Almaty as well.