The regions of Kazakhstan are divided into 170 districts (pl. Kazakh : аудандар, audandar). The districts are listed below, by region:

Kokshetau, formerly known as Kokchetav (1827–1993), is a city in northern Kazakhstan and the capital of Akmola Region, lying in the north of Kokshetau Uplands, on the southern shore of Lake Kopa and the southern edge of the Ishim Steppe. It is also situated at the junction of the Trans-Kazakhstan and South Siberian railways. Kokshetau lies at an elevation of approximately 234 m (768 ft) above sea level.

Abay may refer to: 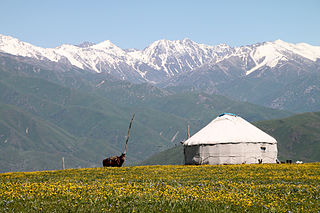 Almaty Region is a region of Kazakhstan, located in the southeastern part of the country, with a population of 2,059,200. Its capital is Taldykorgan city, which has a population of 175,200.

East Kazakhstan Region is a region of Kazakhstan. It occupies the easternmost part of Kazakhstan, and includes parts of the Irtysh River, Lake Markakol, and Lake Zaysan. Its administrative center is Oskemen. The region borders Russia in the north and northeast and the People's Republic of China in the south and southeast. The easternmost point of the Oblast is within about 50 kilometres of the westernmost tip of Mongolia; however, Kazakhstan and Mongolia do not share a common border, the two countries being separated by a small part of Russia and China. The area spans 283,230 square kilometers in area. Population: 1,369,597 (2020); 1,396,593 ; 1,531,024 .

The 1999 Kazakhstan Top Division was the eighth season of the Top Division, now called the Kazakhstan Premier League, the highest football league competition in Kazakhstan.

Aktogay may refer to following localities in Kazakhstan:

Irtysh-Air was an airline headquartered in Ekibastuz, Pavlodar Province, Kazakhstan. Despite the airline being based at Pavlodar Airport, it operates a domestic network within that country from its hub in Almaty International Airport. As of April 2012, the company is banned from operating within the European Union.

SAPSAN was an airline of Kazakhstan, named after the peregrine falcon. It was founded in 2009 and that started operations in 2010. Based in Almaty International Airport and owned by the same parent company that owns Irtysh Air, the airline leased its aircraft to Irtysh Air to operate 5 domestic routes from Almaty (Kostanay, Karaganda, Oskemen, Kyzylorda and Pavlodar.

The 2014 Kazakhstan Cup is the 23rd season of the Kazakhstan Cup, the annual nationwide football cup competition of Kazakhstan since the independence of the country. The competition begins on 22 April 2014, and will end with the final in November 2014. Shakhter Karagandy are the defending champions, having won their first cup in the 2013 competition.

KAZ Minerals plc is a British copper company focused on large scale, low cost open pit mining in Kazakhstan. The Group is listed in London and Kazakhstan stock exchanges. The company operates 3 underground mines and 2 concentrators in the East Region, one open pit mine at Bozymchak, Kyrgyzstan and is developing two major growth projects Aktogay and Bozshakol, with the third - Koksay - at scoping stage. KAZ Minerals was created after the completion of the Restructuring of Kazakhmys PLC. The company is listed on the London Stock Exchange and it is a constituent of the FTSE 250 Index.

Akmola Region is a centrally located region of Kazakhstan. Its capital is Kokshetau. The national capital, Nur-Sultan, is enclosed by the region, but is politically separate from Akmola Region. The region's population is 715,000; Kokshetau's is 157,000. The area is 146,200 square kilometers. It and Karaganda Region are Kazakhstan's only two regions which don't touch the country's outer borders. Akmola Region borders North Kazakhstan Region in the north, Pavlodar Region in the east, Karagandy Region in the south, and Kostanay Region in the west. Some gold and coal mining occur in the area.

The Kazakh Ground Forces is the land service branch of the Armed Forces of the Republic of Kazakhstan. It is one of the three uniformed military services, and is the most senior branch of the Kazakh military in order of precedence. The main tasks of the Ground Forces include the following: maintaining the readiness of troops to repel aggression, the armed defense of the territorial integrity and sovereignty of Kazakhstan, protecting the state and military facilities, peacekeeping missions. In its duties, it primarily engages in land warfare and combined arms operations, including armored and mechanized operations as well as airborne and air assault operations. It is headed by a chief military officer, the Commander of the Ground Forces who is also a member of the General Staff.

The COVID-19 pandemic in Kazakhstan is part of the worldwide pandemic of coronavirus disease 2019 caused by severe acute respiratory syndrome coronavirus 2. The virus was confirmed to have reached Kazakhstan on 13 March 2020. It involved two Kazakh citizens in Almaty who were recently returned from Germany. That same day, two more cases were confirmed with one female arriving from Italy in Nur-Sultan and the other from Germany in Almaty as well.