A city, [upper-roman 1] previously provincial city, is an administrative division unit in Taiwan. [1]

The first administrative divisions entitled "city" were established in the 1920s when Taiwan was under Japanese rule. At this time cities were under the jurisdiction of prefectures. After the World War II, nine (9) out of eleven (11) prefectural cities established by the Japanese government were reform into provincial cities. Their roman spellings are also changed to reflect the official language shift from Japanese to Mandarin Chinese, but characters remain the same.

The reform was based on the Laws on the City Formation (市組織法) of the Republic of China. This law was passed in the early 20th century. The criteria for being a provincial city included being the provincial capital as well as having a population of over 200,000, or over 100,000 if the city had particular significance in politics, economics, and culture. The division reform in 1945 had some compromises between the Japanese and the Chinese systems, some of the cities with population under the criteria were still be established as provincial cities.

After the government of the Republic of China relocated to Taipei, Taiwan in 1949, the population criterion for provincial cities was raised to 500,000 in the Guidelines on the Implementation of Local Autonomy in the Counties and Cities of Taiwan Province (臺灣省各縣市實施地方自治綱要), which was passed in 1981. It was later raised again to 600,000. Since the streamline of provinces in 1998, provincial cities are all directly under the central government, and are simply referred to as cities.

Currently, the Local Government Act of the Ministry of the Interior applies for the creation of a city, in which a city needs to have a population between 500,000 and 1,250,000 and occupies major political, economical and cultural roles. [3] Note that all three existing cities are not qualified for the population test, they were built for historical reasons.

There are currently three cities, all in Taiwan Province:

Their self-governed bodies (executive and legislature) regulated by the Local Government Act are: 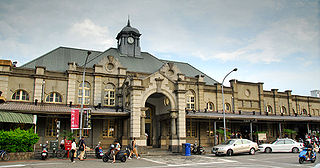 Taiwan Province is a nominal province of the Republic of China without administrative function. Its existence merely retain within the configuration of constitutional structure as a nominal entity and is no longer deemed to be a local self-governing body or one practical administrative division.

Japan is divided into 47 prefectures, which rank immediately below the national government and form the country's first level of jurisdiction and administrative division. They include 43 prefectures proper two urban prefectures, one "circuit" or "territory" and one metropolis. In 1868, the Meiji Fuhanken sanchisei administration created the first prefectures to replace the urban and rural administrators in the parts of the country previously controlled directly by the shogunate and a few territories of rebels/shogunate loyalists who had not submitted to the new government such as Aizu/Wakamatsu. In 1871, all remaining feudal domains (han) were also transformed into prefectures, so that prefectures subdivided the whole country. In several waves of territorial consolidation, today's 47 prefectures were formed by the turn of the century. In many instances, these are contiguous with the ancient ritsuryō provinces of Japan. 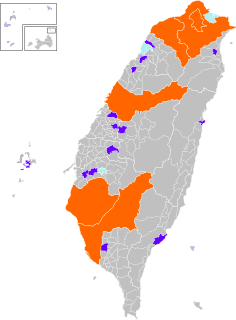 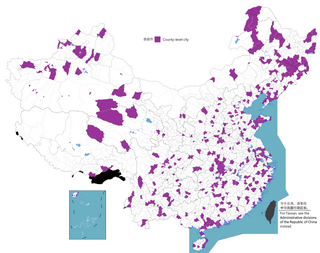 There are eleven types of elections in Taiwan which, since 2012, have been unified into general and local elections, each held every four years, typically in January and November respectively. There may also be by-elections. Electoral systems include first-past-the-post, proportional representation, single non-transferable voting, and a parallel mixture of the above. 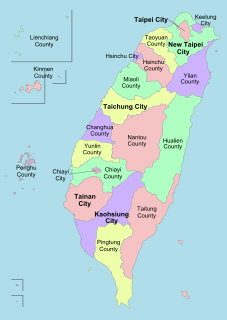 A county, constitutionally known as a hsien, is an administrative division unit in the Republic of China (Taiwan). Under the administrative structure of Taiwan, it is with the same level of a provincial city.

A municipality under the direct administration of central government(simplified Chinese: 直辖市; traditional Chinese: 直轄市; pinyin: zhíxiáshì; lit. 'direct-controlled city'), or, in short form, a municipality, is the highest level of classification for cities used by the People's Republic of China. These cities have the same rank as provinces, and form part of the first tier of administrative divisions of China.

Villages are the basic level administrative subdivisions of Taiwan, under townships, county-administered cities or districts. There are two types of villages depending on the divisions it belongs to.