Last updated June 27, 2021
Historical region
This article is about a historical region of the Qing dynasty. For the present day country, see Mongolia. For the former communist state often referred to as Outer Mongolia, see Mongolian People's Republic.
Not to be confused with Tannu Uriankhai, Uryankhay Krai, or Tuva.

Outer Mongolia (Mongolian script: ᠭᠠᠳᠠᠭᠠᠳᠤ
ᠮᠣᠩᠭ᠋ᠣᠯ or ᠠᠷᠤ
ᠮᠣᠩᠭ᠋ᠣᠯ ， Mongolian Cyrillic: Гадаад Монгол or Ар Монгол, romanization: Gadaad Mongol or Alr Mongol; Manchu: ᡨᡠᠯᡝᡵᡤᡳ
ᠮᠣᠩᡤᠣTülergi Monggo; Chinese : 外蒙古 ; pinyin :Wài Měnggǔ) [1] was a territory of the Qing dynasty from 1691 to 1911. Its area was roughly equivalent to that of the modern state of Mongolia, sometimes called "Outer Mongolia" in China today, plus the Russian republic of Tuva.

The name "Outer Mongolia" is contrasted with Inner Mongolia, [1] which corresponds to the region of Inner Mongolia in China. Inner Mongolia was given its name because it was more directly administered by the Qing court; Outer Mongolia (which is further from the capital Beijing) had a greater degree of autonomy within the Qing empire. [2]

There are three alternate terms including Ar Mongol, Mobei Mongol, and Outer Mongolia.

The term ar mongol or Mobei Mongol (Chinese :漠北蒙古; pinyin :Mòběi Měnggǔ; lit. 'North-of-the- Desert Mongolia') is sometimes used in Mongolian (or Chinese) language to refer to North Mongolia [3] when making a distinction with South Mongolia, so as to elide the history of Qing rule and rather imply a geographic unity or distinction of regions inhabited by Mongols in the Mongolian Plateau. [4] There also exists an English term Northern Mongolia. [4]

Ar Mongol can also be used to refer to Mongolia synchronically, during that time period. [5] In the Mongolian language, the word ar refers to the back side of something, which has been extended to mean the northern side of any spatial entity, e.g. a mountain or a yurt. The word öbür refers to the south (and thus protected) side of a mountain. [6] So the difference between South Mongolia and the Mongolian state is conceived as the metaphor of the backward northern side and the south side of a mountain.

Today, "Outer Mongolia" is sometimes still informally used to refer to Mongolia. "Outer Mongolia" is also used quite commonly in Taiwan. To avoid confusion between the nation of Mongolia and China's Inner Mongolia, media in China generally refer to the former as "State of Mongolia" (Chinese :蒙古国; pinyin :Ménggǔ Guó); that is, the translation of the official name in Mongolian, Монгол Улс/Mongol Uls, instead of just "Mongolia" (Chinese :蒙古; pinyin :Ménggǔ), which could refer to the whole Mongolia area. 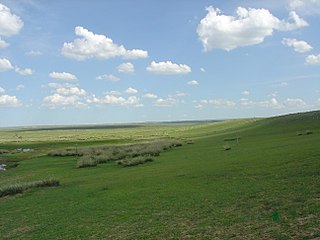 The Tuvans are a Turkic indigenous people of Siberia who live in Russia (Tuva), Mongolia, and China. They speak Tuvan, a Siberian Turkic language. They are also regarded in Mongolia as one of the Uriankhai peoples.

The Khalkha is the largest subgroup of Mongol people in modern Mongolia since the 15th century. The Khalkha, together with Chahars, Ordos and Tumed, were directly ruled by Borjigin khans until the 20th century; unlike the Oirats, who were ruled by Dzungar nobles or the Khorchins, who were ruled by Qasar's descendants. 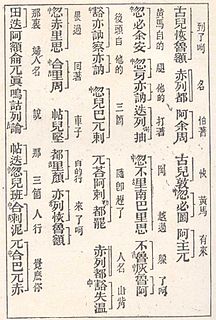 The Secret History of the Mongols is the oldest surviving literary work in the Mongolian language. It was written for the Mongol royal family some time after the 1227 death of Genghis Khan. The author is anonymous and probably originally wrote in the Mongolian script, but the surviving texts all derive from transcriptions or translations into Chinese characters that date from the end of the 14th century and were compiled by the Ming dynasty under the title The Secret History of the Yuan Dynasty. Also known as Tobchiyan in the History of Yuan.

Inner Mongolia is an autonomous region of China, with traditions related to Tuvan music and Mongolian music. Popular musicians including the yangqin player Urna Chahar-Tugchi, formerly of Robert Zollitsch’s Gaoshan Liushui, a world music ensemble. The singer-songwriter Tengger has been well known throughout China since his 1986 hit "I am a Mongolian" ; he has since formed a band called Blue Wolf. 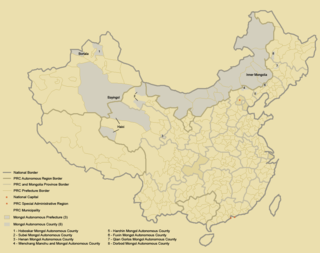 Chinese Mongols or Sino-Mongols are citizens of the People's Republic of China who are ethnic Mongols. They form one of the 55 ethnic minorities officially recognized by the People's Republic of China. There are approximately 5.8 million people classified as ethnic Mongols living in China. Most of them live in Inner Mongolia, Northeast China, Xinjiang, etc. The Mongol population in China is nearly twice as much as that of the sovereign state of Mongolia. 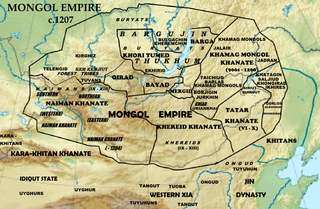 Uriankhai, Uriankhan or Uriankhat, is a term of address applied by the Mongols to a group of forest peoples of the North, who include the Turkic-speaking Tuvans and Yakuts, while sometimes it is also applied to the Mongolian-speaking Altai Uriankhai. The Uriankhai included the western forest Uriankhai tribe and the transbaikal Uriankhai tribe, with the former recorded in Chinese sources as 兀良哈. 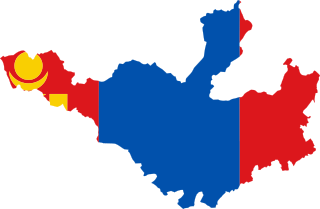 Mongolia under Qing rule was the rule of the Qing dynasty over the Mongolian steppe, including the Outer Mongolian 4 aimags and Inner Mongolian 6 leagues from the 17th century to the end of the dynasty. "Mongolia" here is understood in the broader historical sense. The last Mongol Khagan Ligden saw much of his power weakened in his quarrels with the Mongol tribes, was defeated by the Later Jin dynasty, and died soon afterwards. His son Ejei Khan gave Hong Taiji the imperial authority, ending the rule of Northern Yuan dynasty then centered in Inner Mongolia by 1635. However, the Khalkha Mongols in Outer Mongolia continued to rule until they were overrun by the Dzungar Khanate in 1690, and they submitted to the Qing dynasty in 1691.

The Mongolian Revolution of 1911 occurred when the region of Outer Mongolia declared its independence from the Manchu-led Qing China during the Xinhai Revolution. A combination of factors including economic hardship and failure to resist Western imperialism led many in China to be unhappy with the Qing government. When a new program to settle Mongolia with ethnic Han and assimilate the natives was unveiled, it was met with resistance that resulted in a relatively bloodless separation from the Qing Empire. Many Barga and Inner Mongolian chieftains assisted in the revolution and became the revolution leaders. 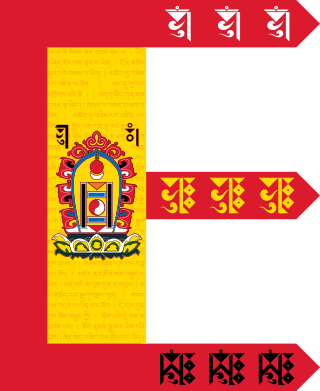 The Bogd Khanate of Mongolia was the government of Outer Mongolia between 1911 and 1919 and again from 1921 to 1924. By the spring of 1911, some prominent Mongol nobles including Prince Tögs-Ochiryn Namnansüren persuaded the Jebstundamba Khutukhtu to convene a meeting of nobles and ecclesiastical officials to discuss independence from Qing China. On November 30, 1911 the Mongols established the Temporary Government of Khalkha. On December 29, 1911 the Mongols declared their independence from the collapsing Qing Empire following the Xinhai Revolution. They installed as theocratic sovereign the 8th Bogd Gegeen, highest authority of Tibetan Buddhism in Mongolia, who took the title Bogd Khaan or "Holy Ruler". The Bogd Khaan was last khagan of the Mongols. This ushered in the period of "Theocratic Mongolia", and the realm of the Bogd Khan is usually known as the "Bogd Khanate".

Southern Mongolian or Inner Mongolian is a proposed major dialect group within the taxonomy of the Mongolian language.

The Upper Mongols, also known as the Köke Nuur Mongols or Qinghai Mongols, are ethnic Mongol people of Oirat and Khalkha origin who settled around Qinghai Lake in so-called Upper Mongolia. As part of the Khoshut Khanate of Tsaidam and the Koke Nuur they played a major role in Sino–Mongol–Tibetan politics during the 17th and 18th centuries. The Upper Mongols adopted Tibetan dress and jewelry despite still living in the traditional Mongolian ger and writing in the script.

Various nomadic empires, including the Xiongnu, the Xianbei state, the Rouran Khaganate (330–555), the First (552–603) and Second Turkic Khaganates (682–744) and others, ruled the area of present-day Mongolia. The Khitan people, who used a para-Mongolic language, founded an empire known as the Liao dynasty, and ruled Mongolia, and portions of the present-day Russian Far East, northern Korea, and North China.

The Altai Uriankhai refers to a Mongol tribe around the Altai Mountains that was organized by the Qing dynasty. They now form a subgroup in western Mongolia and eastern Xinjiang.

The territory currently known as Tuva has been occupied by various groups throughout its history. Sources are rare and unclear for most of Tuva's early history. Archeological evidence indicates a Scythian presence possibly as early as the 9th century BC. Tuva was conquered relatively easily by the succession of empires which swept across the region. It was most likely held by various Turkic khanates until 1207. It was then ruled by Mongols until the 18th century, when it submitted to Manchu rule under the Qing dynasty. Slow Russian colonization during the 19th century led to progressive annexation of the region to Russia in the 20th century. The region was then controlled by the Russian Empire and the Soviet Union before finally joining the Russian Federation in 1992. Throughout this whole time, the borders of Tuva have seen very little modification.