Chahar (Mongolian : ᠴᠠᠬᠠᠷ, Чахар; traditional Chinese :察哈爾; simplified Chinese :察哈尔; pinyin :Cháhā'ěr), also known as Chaha'er, Chakhar or Qahar, was a province of the Republic of China in existence from 1912 to 1936, mostly covering territory in what is part of Eastern Inner Mongolia. It was named after the Chahar Mongols.

Chahar Province is named after the Chahar, a tribal group of the Mongols who live in that area. Before the unification of the Mongol tribes under Genghis Khan, the area had seen intermittent Chinese influence over the native Mongols. After the Yuan dynasty (1271–1368), the area was only intermittently controlled by China. The Chahar had become the personal appanage of the monarchs of the Northern Yuan dynasty since the reign of Batumongke Dayan Khan (r. 1479–1517). By the Qing dynasty (1644–1912), Chahar was not yet a Chinese province, but "Zhangyuan Special Region" (張垣特區), although Yao Xiguang (姚錫光) proposed making Chahar a province as early as 1908. [1] [2]

In 1913, the second year of the Republic of China, Chahar Special Administrative Region was created as a subdivision of Zhili Province, containing 6 Banners and 11 counties: [3]

In 1928, it became a province. The last five counties on the above list (starting from Xinghe) were partitioned to Suiyuan province. And ten counties were included from Xuanhua Subprefecture (宣化府), Koubei Circuit (口北道), Hebei Province: [3]

From 1937 to 1945, it was occupied by Japan and made a part of Mengjiang, a Japanese-controlled region led by Mongol Prince Demchugdongrub of the Shilingol Alliance. The Chahar People's Anti-Japanese Army Alliance (察哈爾民眾抗日同盟軍) was established in Kalgan on May 26, 1933 by Feng Yuxiang (馮玉祥) and Ji Hongchang (吉鴻昌).

In 1952, six years after becoming communist, the province was abolished and divided into parts of Inner Mongolia, Beijing Municipality and Hebei.

Chahar Province was divided north-south by the Great Wall, with North Chahar being the larger in area and South Chahar, with the capital, Zhangjiakou, being far larger in population. It had an area of 278.957 km2 (107.706 sq mi). In North Chahar most of the land was part of the northeastern extension of the Gobi Desert.

The Chahars are a subgroup of Mongols that speak Chakhar Mongolian and predominantly live in southeastern Inner Mongolia, China. 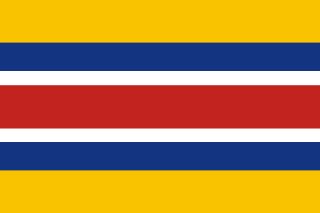 Mengjiang (Mengkiang), also known in English as Mongol Border Land or the Mengjiang United Autonomous Government, was an autonomous area in Inner Mongolia, formed in 1939 as a puppet state of the Empire of Japan, then from 1940 being under the nominal sovereignty of the Reorganized National Government of the Republic of China. It consisted of the previously Chinese provinces of Chahar and Suiyuan, corresponding to the central part of modern Inner Mongolia. It has also been called Mongukuo or Mengguguo. The capital was Kalgan, from where it was ruled by the Mongol nobleman Prince Demchugdongrub. The territory returned to Chinese control after the defeat of the Japanese Empire in 1945. 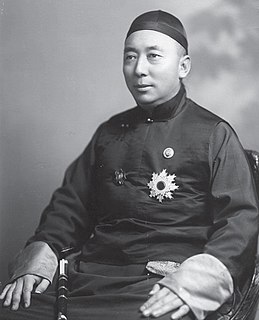 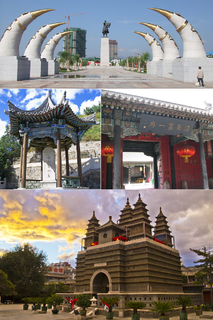 Hohhot, abbreviated Hushi, formerly known as Kweisui, is the capital of Inner Mongolia in the north of the People's Republic of China, serving as the region's administrative, economic and cultural center. Its population is 2,866,615 inhabitants as of the 2010 census, of whom 1,980,774 lives in the built-up area made up of 4 urban districts. 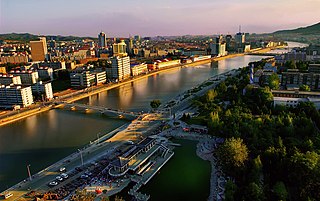 Zhangjiakou also known as Kalgan and several other names, is a prefecture-level city in northwestern Hebei province in Northern China, bordering Beijing to the southeast, Inner Mongolia to the north and west, and Shanxi to the southwest. By 2019, its population was 4,650,000 inhabitants on 36,861.56 square kilometres (14,232.33 sq mi), divided into 17 Counties and Districts. The built-up area made of Qiaoxi, Qiaodong, Chongli, Xuanhua, Xiahuayuan Districts largely being conurbated had 1,500,000 inhabitants in 2019 on 1,412.7 km2 (545.4 sq mi). 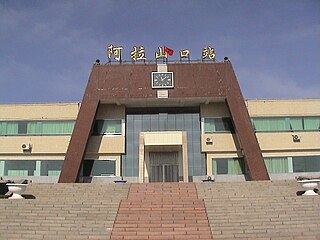 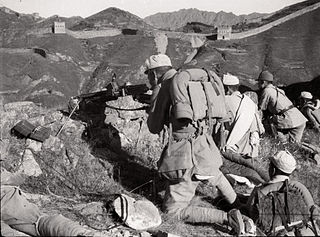 Operation Chahar, known in Chinese as the Nankou Campaign, occurred in August 1937, following the Battle of Beiping-Tianjin at the beginning of Second Sino-Japanese War.

Li Shouxin was a pro-Japanese commander in the Manchukuo Imperial Army and later the Mengjiang National Army.

The Roman Catholic Diocese of Xiwanzi/Chongli is a diocese located in the city of Xiwanzi in the Ecclesiastical province of Suiyuan in China.

Chahar or Qahar Right Front Banner is a Banner of Inner Mongolia, People's Republic of China, surrounding Jining District and bordering Xinghe County to the east, Fengzhen City to the south, Zhuozi County to the west, and Chahar Right Back Banner to the north. Its territory includes Lake Huangqi. It is under the administration of Ulaan Chab City. Its most important settlement is Tuguiwula, where Tuguiwula railway station is located.

Chahar Right Middle Banner is a banner of Inner Mongolia, People's Republic of China, bordered by Chahar Right Back Banner to the east, Zhuozi County to the south, and Siziwang Banner to the northwest. It is under the administration of Ulaan Chab City. 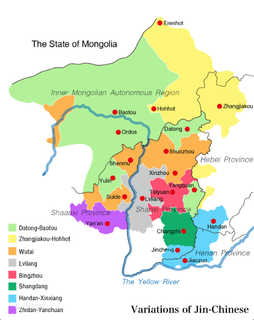 Zhangjiakou–Hohhot is a dialect of Jin, one of the principal varieties of Chinese. It is colloquially referred to by native speakers as Cǐdì-huà. It is spoken in the city of Hohhot, in Inner Mongolia, and Zhangjiakou in Hebei Province in China. One of its sub-branches is Hohhot dialect, which is also locally referred as Hūshì-huà. The other sub-branch is Zhangjiakou dialect.