The Third Rutte cabinet has been the cabinet of the Netherlands since 26 October 2017. It was formed by a coalition government of the political parties People's Party for Freedom and Democracy (VVD), Christian Democratic Appeal (CDA), Democrats 66 (D66) and Christian Union (CU) after the general election of 2017.

The 2017 general election resulted in a House of Representatives where at least four parties would be required to form a coalition with a majority (76 seats). Media sources speculated that incumbent Prime Minister Mark Rutte of the VVD would seek to form a government with the support of the centre-right CDA and liberal D66. The CU was thought to be the most likely candidate to be the fourth member of the coalition. [1] Minister of Health, Welfare and Sport, Edith Schippers, was selected by the VVD to serve as the party's informateur on 16 March and appointed by Speaker of the House Khadija Arib, seeking to determine whether Jesse Klaver of GroenLinks (GL) solely desired a left-wing government, or instead simply viewed the VVD as an unlikely coalition partner. Similarly, talks with Emile Roemer of the Socialist Party (SP), who repeatedly stated during the campaign that his party would not govern with the VVD, remained a possibility. [2]

The first proposed coalition was one involving the VVD-CDA-D66 and GL. This was the preferred coalition of Alexander Pechtold, Lodewijk Asscher and Gert-Jan Segers, while Jesse Klaver continued to argue that the major policy differences between GL and the VVD would make a coalition difficult. [11] Nevertheless, the four parties began more serious negotiations toward a coalition agreement. The Nederlandse Omroep Stichting (NOS) reported that "labour market reform, investment in law enforcement and additional money for nursing homes" would be areas of agreement between the parties, while "refugee policy, income distribution, climate and medical ethics issues are potential stumbling blocks". [12]

On 15 May, talks on the proposed four-way VVD-CDA-D66-GL coalition failed. It was reported that the main dispute concerned immigration, but GL Leader Jesse Klaver cited climate issues and income differences as other issues where the parties disagreed. The end of the talks was reported to be a consensus decision, with no party blaming any others. [13] [14]

In late June 2017, discussions began again between the VVD, D66, the CDA and the CU under the lead of new informateur Herman Tjeenk Willink. After a three-week summer break, talks resumed on 9 August 2017, and were reported to be close to a conclusion due to representatives of unions and employers' organizations joining the discussions, which typically happens near the end of such negotiations. [17] [18] In September 2017, a budget deal compromise was reached allowing the coalition talks to continue. While still 'close to conclusion', it appeared likely that the talks about government formation would exceed the record since World War II of 208 days set in 1977. [19] After 208 days of negotiations, the VVD, D66, CDA and CU agreed to a coalition under a third informateur, Gerrit Zalm, [20] [21] [22] and all members of the House of Representatives of the involved parties approved the agreement on 9 October 2017. [23] On 26 October the new cabinet was formally installed, 225 days after the elections, setting a record for the longest cabinet formation in Dutch history.

On 7 October 2019, the government lost its majority when Wybren van Haga, after being expelled from Rutte's VVD party for allegedly renovating a building he owned without the necessary permits, decided to sit as an Independent. Had he resigned, another member on the VVD electoral party list would have replaced him, maintaining Rutte's parliamentary majority of one. According to Politico EU , van Haga wrote he would vote with the government on established coalition policy, but would make his own decisions on future laws. [24]

The Third Rutte cabinet repealed the Referendum Act passed in 2015, although that proposal was written in none of the coalition parties' election platforms. It stated the law had not delivered what was expected; results from the 2016 Ukraine–European Union Association Agreement referendum and 2018 Intelligence and Security Services Act referendum have been going against government proposals. The cabinet also deconstitutionalised the method of appointment of mayors and King's commissioners, thus allowing the method to be changed by law. [25]

In judicial matters, the cabinet intends to end the automatic conditional release of prisoners after two thirds of their sentence, and to shorten asylum permits from five to three years, after which refugees can request an extension of another two years. [25]

The cabinet intends to reform the labour market and pension system. Laws around the termination of employment will be relaxed, while paid sick leave will be shortened. The cabinet initially planned to allow employers to pay handicapped people below the minimum wage, which would then be supplemented by local government. However, this proposal was later retracted. [25]

The cabinet pledged to ban the sale of non-emission-free cars by 2030. There are also plans to introduce a flight tax by 2021. [25] In March 2018, the cabinet also pledged to end gas extraction from the Groningen gas field within twelve years. [27]

Kajsa Ollongren took a extended medical leave of absence on 1 November 2019.
Serves in an acting capacity due to the medical leave of absence of Kajsa Ollongren.
Retained this position from the previous cabinet.
Resigned.
Served ad interim .
Allowed to use the title of Minister while on foreign business.
Martin van Rijn is a member of the PvdA, but he joined the cabinet independently.

The People's Party for Freedom and Democracy is a conservative-liberal political party in the Netherlands.

Jan Pieter "Jan Peter" Balkenende Jr. is a Dutch jurist and retired politician who served as Prime Minister of the Netherlands from 22 July 2002 to 14 October 2010. He is a member of the Christian Democratic Appeal (CDA). 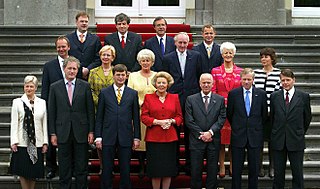 The Second Balkenende cabinet was the cabinet of the Netherlands from 27 May 2003 until 7 July 2006. The cabinet was formed by the political parties Christian Democratic Appeal (CDA), People's Party for Freedom and Democracy (VVD) and the Democrats 66 (D66) after the election of 2003. The centre-right cabinet was a majority government in the House of Representatives.

General elections were held in the Netherlands on 22 November 2006 following the fall of the Second Balkenende cabinet. The elections proved relatively successful for the governing Christian Democratic Appeal (CDA) which remained the largest party with 41 seats, a loss of only three seats. The largest increase in seats was for the Socialist Party (SP), which went from nine to 25 seats. The main opposition party, the social-democratic Labour Party (PvdA) lost nine of its 42 seats, while the right-liberal People's Party for Freedom and Democracy (VVD) and the progressive liberal Democrats 66 lost a considerable portion of their seats, six of 28 and three of six, respectively. New parties, such as the right-wing Party for Freedom (PVV) of former VVD MP Geert Wilders and the animal rights party Party for the Animals (PvdD) were also successful, with the PVV winning nine seats and the PvdD winning two, thereby becoming the first animal rights group to enter a European parliament. 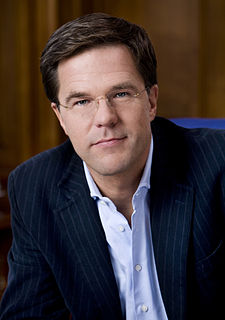 Mark Rutte is a Dutch politician serving as Prime Minister of the Netherlands since 2010 and Leader of the People's Party for Freedom and Democracy (VVD) since 2006. 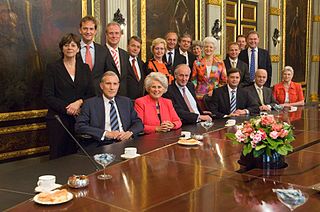 The Third Balkenende cabinet was the cabinet of the Netherlands from 7 July 2006 until 22 February 2007. The cabinet was formed by the political parties Christian Democratic Appeal (CDA) and the People's Party for Freedom and Democracy (VVD) after the resignation of the Second Balkenende cabinet. The right-wing rump cabinet served as a caretaker government until the election of 2006.

Following the 2006 Dutch general election, held on November 22, a process of cabinet formation started, involving negotiations about which coalition partners to form a common programme of policy and to divide the posts in cabinet. On February 22, 2007 it resulted in the formation of the Fourth Balkenende cabinet.

The Fourth Balkenende cabinet was the cabinet of the Netherlands from 22 February 2007 until 14 October 2010. The cabinet was formed by the political parties Christian Democratic Appeal (CDA), Labour Party (PvdA) and the Christian Union (CU) after the election of 2006. The centre-left grand coalition cabinet was a majority government in the House of Representatives.

General elections were held in the Netherlands on Wednesday 9 June 2010. This was triggered by the fall of Prime Minister Jan Peter Balkenende's fourth cabinet on 20 February with Queen Beatrix accepting the resignation of the Labour Party (PvdA) ministers on 23 February. The conservative-liberal People's Party for Freedom and Democracy (VVD), led by Mark Rutte, won the largest number of seats in the House of Representatives while the social-democratic PvdA, led by Job Cohen, came a narrow second. The election was also noted for the rise of the Party for Freedom (PVV), which came third, led by controversial politician Geert Wilders. On the other hand, Balkenende's Christian Democratic Appeal (CDA) saw a poor result, losing half its seats and dropping from first to fourth place. The Socialist Party (SP) also lost seats. Notably, the 31 seats won by the VVD was its most since 1998, and the one-seat margin between the VVD and PvdA is the closest on record. 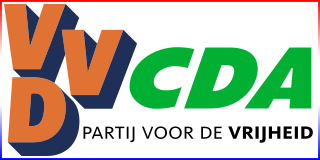 Following the Dutch general election of 2010, held on June 9, a process of cabinet formation started, which typically involves 3 phases:

Sybrand van Haersma Buma is a Dutch politician serving as Mayor of Leeuwarden since 2019. Until 2019, he was a member of the House of Representatives from 2002 who also served as the parliamentary leader of the Christian Democratic Appeal (CDA) from 2010 and as the leader of his party from 2012.

The First Rutte cabinet, also called the Rutte–Verhagen cabinet was the cabinet of the Netherlands from 14 October 2010 until 5 November 2012. The cabinet was formed by the political parties People's Party for Freedom and Democracy (VVD) and the Christian Democratic Appeal (CDA) after the election of 2010. The right-wing cabinet was a minority government in the House of Representatives but was supported by the Party for Freedom (PVV) for a majority. It was the first of three cabinets of Mark Rutte, the Leader of the People's Party for Freedom and Democracy as Prime Minister, with Maxime Verhagen the Leader of the Christian Democratic Appeal serving as Deputy Prime Minister.

Early general elections were held in the Netherlands on 12 September 2012 after Prime Minister Mark Rutte handed in his government's resignation to Queen Beatrix on 23 April. The 150 seats of the House of Representatives of the Netherlands were contested using party-list proportional representation. The People's Party for Freedom and Democracy (VVD) received a plurality of the votes, followed by the Labour Party (PvdA).

General elections were held in the Netherlands on Wednesday 15 March 2017 to elect all 150 members of the House of Representatives.

The Second Rutte cabinet, also called the Rutte–Asscher cabinet, was the cabinet of the Netherlands from 5 November 2012 until 26 October 2017. The cabinet was formed by the political parties People's Party for Freedom and Democracy (VVD) and the Labour Party (PvdA) after the election of 2012.

The next Dutch general election to elect the members of the House of Representatives is scheduled for 17 March 2021, but may be held at an earlier date if a snap election is called.