The office was created on 23 May 1926, when the constitution of the state of Greater Lebanon was promulgated. In the summer of 1943, when the National Pact was agreed, it was decided that the office of the Prime Minister would always be reserved for a Sunni Muslim. From the creation of the office in 1926 to the end of the Lebanese Civil War, the constitution made little mention of the roles and duties of the office, and most of the office's powers were exercised through informal means rather than through constitutional procedures. Following the end of the Civil War and the ratification of the Ta'if Accord, the responsibilities of the Prime Minister were codified and clearly listed in the Constitution.

Past irregularities in the office of the Prime Minister

Twice in the past, when the president resigned or shortly before his term expired, the president broke the National Pact and appointed a Maronite Christian with the justification that he would assume the powers of the presidency.

During the Lebanese Civil War, outgoing President Amine Gemayel dismissed incumbent Prime Minister Selim Hoss and appointed Army General-in-chief Michel Aoun as Prime Minister 15 minutes before the expiry of his term. Hoss refused his dismissal, and this led to the creation of a dual government; one, mainly civilian and Muslim in West Beirut, and the other, mainly military and Christian in East Beirut.

The Prime Minister is the President of the Council of Ministers and the head of government. In addition, they are the deputy chair of the Supreme Defense Council.

Their responsibilities are the following [2] :

Following the ratification of the Ta'if Accord, the Constitution laid out a preamble for the three "key" executive posts: the President, the Prime Minister, and the Council of Ministers. The preamble states the following:

Lebanon is a semi-presidential parliamentary democratic republic within the overall framework of confessionalism, a form of consociationalism in which the highest offices are proportionately reserved for representatives from certain religious communities. The constitution grants the people the right to change their government. However, from the mid-1970s until the parliamentary elections in 1992, the Lebanese Civil War (1975–1990) precluded the exercise of political rights.

The President of Haiti, officially called the President of the Republic of Haiti is the head of state of Haiti. Executive power in Haiti is divided between the president and the government headed by the Prime Minister of Haiti. The current president is Jovenel Moïse, who took office on February 7, 2017.

The Taif Agreement was an agreement reached to provide "the basis for the ending of the civil war and the return to political normalcy in Lebanon". Negotiated in Ta'if, Saudi Arabia, it was designed to end the decades-long Lebanese Civil War, reassert Lebanese authority in Southern Lebanon, though the agreement set a time frame for Syrian withdrawal and stipulated that the Syrians withdraw in two years. It was signed on 22 October 1989 and ratified by the Lebanese parliament on 5 November 1989.

Michel Naim Aoun is the current President of Lebanon. He was elected president on 31 October 2016 on the 46th electoral session of the Lebanese parliament, breaking a 29-month deadlock. He is a Maronite Christian and the founder of the Free Patriotic Movement. 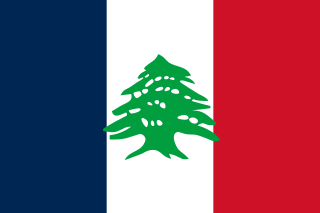 The State of Greater Lebanon was a state declared on 1 September 1920, which became the Lebanese Republic in May 1926, and is the predecessor of modern Lebanon.

Selim Ahmed Hoss is a veteran Lebanese politician. He was a Prime Minister of Lebanon and a longtime Member of Parliament representing his hometown, Beirut. He is known as a technocrat.

Rashid Abdul Hamid Karami was a Lebanese statesman. He is considered one of the most important political figures in Lebanon for more than 30 years, including during much of the Lebanese Civil War (1975–1990), and he served as prime minister ten times, making him the most democratically elected prime minister in history according to the Guinness Book of World Records 2005

The National Pact is an unwritten agreement that laid the foundation of Lebanon as a multiconfessional state, having shaped the country to this day. Following negotiations between the Shia, Sunni, and Maronite leaderships. This agreement was made between the president at the time, Bishara al-Khuri and the prime minister Raid al-Sulh. Mainly, centered around the interests of political elite, the Maronite elite served as a voice for the Christian population of Lebanon while the Sunni elite represented the voice of the Muslim population. The National Pact was born in the summer of 1943, allowing Lebanon to be independent.

The president of the Lebanese Republic is the head of state of Lebanon. The president is elected by the parliament for a term of six years, which is not immediately renewable. By convention, the president is always a Maronite Christian who is at least 21 years old.

Lebanese Independence Day is the national day of Lebanon, celebrated on 22 November in commemoration of the end of the French Mandate over Lebanon in 1943, after 23 years of Mandate rule.

Lebanon is an eastern Mediterranean country that is composed of mostly Muslims (majority) and Christians (minority). The main two religions are Islam with 55.7% of the citizens and Christianity with 40.4% of the citizens. The Druze are about 4.9% of the citizens. The country has the most religiously diverse society of all states within the Middle East, comprising 18 recognized religious sects. But outside of Lebanon, Lebanese people are mostly Christians. It is also estimated that a large proportion of its population are refugees which affects statistics. The refugees mostly Syrian or Palestinian are predominately Sunni but also includes Christians and Shia.

Rachid Solh was a Lebanese politician and former Prime Minister, kin of one of the most eminent Sunni Muslim families in the country that brought several of its members to the office of Prime Ministers, and that was originally from Sidon but later moved its civil-records to Beirut.

This article incorporates  public domain material from the Library of Congress website https://www.loc.gov/law/help/lebanon-constitutional-law.php .