Kris McQuade (born 1952) is an Australian actress who has had many film, television and theatre roles.

Blue Heelers is an Australian police drama series that was produced by Southern Star Group and ran for 13 years on the Seven Network, from 1994 to 2006. Although based around the policing of the town, the series generally depicted the everyday lives and relationships of the residents of Mount Thomas, a fictional small town in Victoria. The series was one of the highest-rated and most-awarded programs in the history of Australian television, having won 5 Logie awards, it is equal as the most awarded show in Logies history with The Don Lane Show. It is also noted for its two main stars Lisa McCune, a four-time recipient of the Gold Logie, and John Wood, who also won Gold. 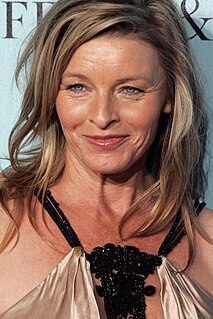 Stefan Dennis is an Australian actor and singer best known for playing the role of cold-hearted and ruthless businessman Paul Robinson in the soap opera Neighbours from its first episode in March 1985 to the present day. He departed Neighbours in 1993, but returned in 2004 and has played Paul Robinson ever since. During his time away from Neighbours he was a cast member of Scottish soap opera River City. He is also known for his 1989 hit single "Don't It Make You Feel Good", which reached Number 16 in the Irish and UK Singles Chart.

Martin Colin Sacks is an Australian actor who is chiefly known for his 12-year role on Blue Heelers from 1993 to 2005.

Supernova is a British comedy television programme produced by Hartswood Films and jointly commissioned by the BBC in the UK and UKTV in Australia. It follows Dr Paul Hamilton, a Welsh astronomer, who leaves a dull academic post and unloved girlfriend for a new job at the Royal Australian Observatory, deep in the Australian outback. The comedy centres on his difficulties adjusting to life in the outback and his eccentric fellow astronomers. The first series was released in the United Kingdom and Australia in October 2005 and consisted of six 30-minute episodes. The second series began airing on 3 August 2006 in the UK.

Posie Graeme-Evans is an Australian novelist, television and film producer, editor, screenwriter and director. She is best known as the creator and showrunner of McLeod's Daughters, the co-creator and co-producer of Hi-5, producing and creating Mirror, Mirror, and was Director of Drama for the Nine Network from 2002-2005. As an author she is known for six historical novels, published by NY based Simon & Schuster.

Ben Geurens is an Australian actor.

Celia Ireland is an Australian actress. She is best known for her role as Regina Butcher on the television series All Saints and her Logie award winning role as Liz Birdsworth on the prison drama series Wentworth.

The second season of the Australian police-drama Blue Heelers premiered on the Seven Network on 21 February 1995 and aired on Tuesday nights at 8:30 PM. The 41-episode season concluded 21 November 1995. The cast for this season was the same as that of the preceding season, with the omission of Ann Burbrook as Roz Patterson and with the introduction of Damian Walshe-Howling as Adam Cooper to take her place. This season of Blue Heelers was released on DVD on 1 December 2005 and was released in a two-part release; and later as a complete set.

Nicholas Colla is an Australian actor, writer and director, best known for his roles as Joel Peterson in Holly's Heroes and Adam Stevens in Neighbours.

McQuade is a surname originating from county Monaghan and other areas in the north of the Republic of Ireland. The McQuade surname has been spelled in many different variations throughout time including variants: Mcquade, Mcquaide, Mcquaid, McQuaid, and most recently, McQuaide. Notable people with the surname include:

The Love Letters from Teralba Road is a 1977 Australian short film directed by Stephen Wallace. In 1980 David Stratton called it "not only the most moving love story given to us by the Australian cinema, but also probably the best featurette of the decade."

Kate Atkinson is an Australian film, television and theatre actress. She is best known for her roles on television series SeaChange as police officer Karen Miller and Offspring as Renee. Since 2013, she has appeared in a regular role in Wentworth as Deputy Governor Vera Bennett.

"On the Inside" is the theme song for the Australian soap opera Prisoner. It was written by Allan Caswell and performed by Lynne Hamilton. 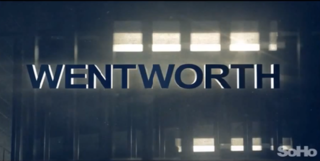 The first season of the crime drama television series Wentworth originally aired on SoHo in Australia. The season consisted of 10 episodes and aired between 1 May and 3 July 2013. It was executively produced by FremantleMedia's director of drama Jo Porter. The series is a remake of Prisoner, which aired on Network Ten from 1979 to 1986. Lara Radulovich and David Hannam developed Wentworth from Reg Watson's original concept. The season was shot over four months from 10 October 2012.

Damien Richardson is an Australian film, television and theatre actor and writer. A graduate from the Victorian College of the Arts, Richardson has appeared in a variety of Australian films and television shows, including Blue Heelers, McLeod's Daughters, Redball, The Hard Word, Rogue, Conspiracy 365 and Wentworth. He and co-writer Luke Elliot won the Best New Comedy-Drama award at the Melbourne Fringe Festival for their play The Belly Of The Whale. One of Richardson's best known roles is Detective Matt Ryan in the crime drama City Homicide, which he played from 2007 until 2011. Since 2012, Richardson has starred as Drew Greer in the Jack Irish television films and subsequent 2016 series. He played Gary Canning in the soap opera Neighbours from 2014 to 2020.