Come Out Fighting is a short 1973 Australian feature directed by Nigel Buesst.

Aboriginal boxer Al Dawson is torn by the demands of fight promoters and aboriginal protestors. He eventually decides to reject them all and gives away his chance at a world title.

The film was shot on 16mm and was made with the assistance of the Experimental FIlm and Television Fund. Filming completed by July 1973. [2] 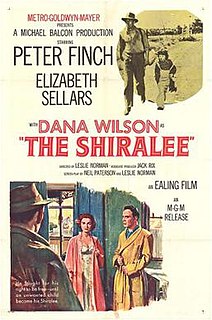 The Shiralee is a 1957 British film in the Australian Western genre. It was made by Ealing Studios, starring Peter Finch, directed by Leslie Norman and based on the novel by D'Arcy Niland. Although all exterior scenes were filmed in Sydney, Scone and Binnaway, New South Wales and Australian actors Charles Tingwell, Bill Kerr and Ed Devereaux played in supporting roles, the film is really a British film made in Australia, rather than an Australian film. 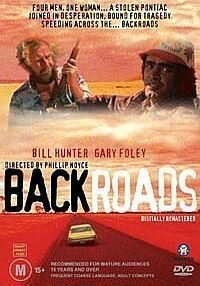 Backroads is a 1977 Australian film directed by Phillip Noyce. Two strangers – one white (Jack), one Aboriginal (Gary) – steal a car in western New South Wales and drive around the coast. The original characters came from a story by Adelaide writer John Emery, with whom Noyce had worked on a short film. Australian reviews of the film were mixed, and it opened commercially in only one cinema.

The Trespassers is a 1976 film directed by John Duigan and starring Judy Morris and Briony Behets.

Rangle River is a 1936 Australian Western film directed by Clarence G. Badger based on a story by Zane Grey.

The Hayseeds' Melbourne Cup is a 1918 Australian rural comedy from director Beaumont Smith. It was the fourth in his series about the rural family, the Hayseeds, and centers on Dad Hayseed entering his horse in the Melbourne Cup.

In the Nick of Time is a 1911 Australian silent film directed by Alfred Rolfe. It was described as a "sensational railway drama", although now is considered a lost film. It featured a fight on the footboard of a train.

Way Outback is a 1911 Australian silent film directed by Alfred Rolfe. It was described as "a typical Australian story of mining life in the back blocks" and being "full of action and incident".

The Crime and the Criminal is a 1912 Australian silent film directed by Alfred Rolfe. It features the same railway collision as the climax in Do Men Love Women? (1912) which had come out only a few weeks prior. However the plots of the movies are different.

Moira, or The Mystery of the Bush is a 1912 Australian silent film directed by Alfred Rolfe.

The Tenth Straw is a 1926 Australian silent film heavily inspired by the novel For the Term of His Natural Life. Little is known of the director and cast, but most of the film survives today.

The Bondage of the Bush is a 1913 Australian silent film starring, written, produced and directed by Charles Woods. It is considered a lost film. It screened widely in country areas.

Journey Out of Darkness is a 1967 Australian film.

Lost in the Bush is a 1973 Australian film based on the true story of three siblings who got lost in the Victorian bush for several days in 1864. They were discovered through the help of some aboriginal trackers including Dick-a-Dick.

Dalmas is a 1973 Australian film directed by Bert Deling. One critic wrote that "with Dave Jones’ Yackety Yack [the film] constitutes the clearest presence of Godard in Australian cinema."

Down the Wind is a 1975 Australian film which marked the directorial debut of Scott Hicks. He made it shortly after graduating from university.

Plugg is a 1975 Australian sex comedy about a private investigator.