Yajilarra is a documentary film by Australian director Melanie Hogan about the resilience of the Aboriginal women in the remote Kimberly region of outback Australia.

In 2007 a group of Aboriginal women from the Fitzroy Valley in Australia's remote northwest decided "enough was enough". Their community had experienced 13 suicides in 13 months. Reports of family violence and child abuse were commonplace and alcohol consumption was rising at an alarming rate.

A group of courageous Aboriginal women from across the Valley came together, with the support of many men, to fight for a future for everyone in their community. The results were inspiring and the healing has now begun, with the film playing a key role in the creation and rolling out of alcohol restrictions throughout the Kimberly.

In Canada, the First Nations are the predominant indigenous peoples in Canada south of the Arctic Circle. Those in the Arctic area are distinct and known as Inuit. The Métis, another distinct ethnicity, developed after European contact and relations primarily between First Nations people and Europeans. There are 634 recognized First Nations governments or bands spread across Canada, roughly half of which are in the provinces of Ontario and British Columbia.

Fitzroy Crossing is a small town in the Kimberley region of Western Australia, 400 kilometres (250 mi) east of Broome and 300 kilometres (190 mi) west of Halls Creek. It is approximately 2,524 kilometres (1,568 mi) from the state capital of Perth. 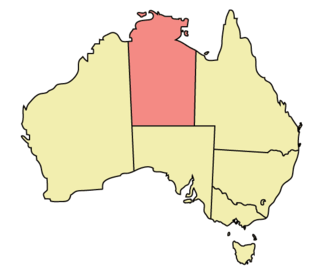 Marcia Lynne Langton AM holds the Foundation Chair in Australian Indigenous Studies at the University of Melbourne in the Faculty of Medicine. In 2016 she became Distinguished Professor and in 2017, Associate Provost.

Aboriginal avoidance practices refers to those relationships in traditional Aboriginal society where certain people are required to avoid others in their family or clan. These customs are still active in many parts of Australia, to a greater or lesser extent.

Alcohol is commonly consumed and available at pubs and liquor stores in Australia – all of which are private enterprises. Spirits can be purchased at liquor stores and pubs, whereas grocery stores do not sell them, although they may have separate liquor stores on their premises. Alcohol consumption is higher, according to WHO studies, than in most European countries and several Central Asian and African countries, although consumption is just as high in Australia as in North America. After tobacco, alcohol is the second leading preventable cause of death and hospitalisation in Australia. 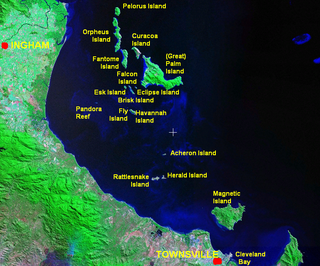 Great Palm Island, usually known as Palm Island, is the largest island in the Palm Islands group off Northern Queensland, Australia. It is known for its Aboriginal settlement, once an Aboriginal reserve, which is also known by a variety of other names including "the Mission", Palm Island Settlement or Palm Community. The original inhabitants of the island were the Manbarra, also known as the Wulgurukaba. The island is also sometimes called Bwgcolman, from the name recently given to the Aboriginal people from disparate groups who were deported from many areas of the Queensland mainland to the reserve. 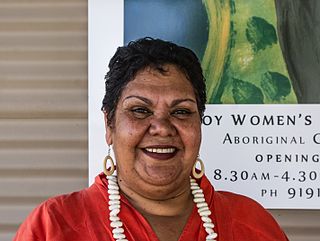 June Oscar AO is an Australian Aboriginal woman of Bunuba descent, indigenous rights activist, community health and welfare worker, film and theatre producer, and Aboriginal and Torres Strait Islander Social Justice Commissioner. Oscar is best known for her fight against Fetal Alcohol Spectrum Disorder (FASD) and work in improving the lives of Aboriginal people in remote communities. In 2007, she led the successful campaign for alcohol restrictions in the Kimberley town of Fitzroy Valley. On 10 June 2013, Governor-General of Australia Quentin Bryce awarded Oscar an Officer of the Order of Australia, for "distinguished service to the Indigenous community of Western Australia, particularly through health and social welfare programs".