Basically Black is a 1973 Australian television comedy program, notable as the first television program written and created by Indigenous Australians.

A single half-hour of sketch comedy, the program was based on a satirical political revue of the same name by the National Black Theatre. It premiered on 7 July 1973 as part of a series of ABC comedy pilots, 'The Comedy Game'. [1] Some elements of the original script had been censored by ABC. [2]

Stan Grant is a television news and political journalist, television presenter, author of several best-selling non-fiction books and filmmaker. A Wiradjuri man, as of 2020 he is the Australian Broadcasting Corporation's Indigenous and international affairs analyst, occasional presenter on ABC TV and Al Jazeera, and Professor of Global Affairs at Griffith University in Queensland. 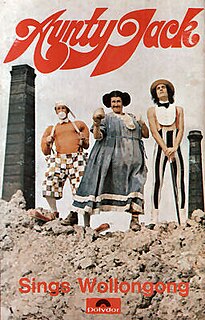 The Aunty Jack Show was a Logie Award-winning Australian television comedy series that ran from 1972 to 1973. Produced by and broadcast on ABC-TV, the series attained an instant cult status that persists to the present day.

Barry Hugh Crocker is an Australian character actor, television personality, singer, and variety entertainer with a crooning vocal style known for his iconic Australian films during the 1970s The Adventures of Barry McKenzie and sequel Barry McKenzie Holds His Own and singing the theme tune to the Australian soap opera Neighbours between 1985 and 1992.

Timothy David Minchin is an Australian comedian, actor, writer, musician, and songwriter. He was born in Northampton, England, to Australian parents, and raised in Perth, Western Australia.

Justine Clarke is an Australian actress, singer, musician, author and television host. She has been acting since the age of seven and has appeared in some of Australia's best-known TV shows. She is also a film and stage actor, and won the Best Actress Award at the Mar del Plata International Film Festival in Argentina in 2006 for her role in independent film Look Both Ways.

The Family Law is an Australian comedy television program created by Benjamin Law. The six-part series, loosely adapted from Law's 2010 book of the same name, was written by Law and Marieke Hardy. The series was produced by Matchbox Pictures and screened on SBS from 14 January 2016. A second season of the show premiered on 15 June 2017. The third and final season of the show aired on 12 January 2019.