Bush Mechanics is a humorous 2001 television docudrama series directed by David Batty and Francis Jupurrurla Kelly and produced by the Warlpiri Media Association (now Pintubi Anmatjere Warlpiri (PAW) Media), featuring an Aboriginal Australian take on motor mechanics, since described as "iconic". The film starred Warlpiri people and was filmed in and around Yuendumu, a large mainly Indigenous town in the Northern Territory of Australia.

An touring exhibition based on the series toured Australian museums from 2018 to 2019, with a book published to accompany it in 2017.

Bush Mechanics is a four-part television series directed by David Batty and Francis Jupurrurla Kelly, and produced by the Warlpiri Media Association, released in 2001. [1]

A bush mechanic, in Australian parlance, is someone who uses unorthodox techniques and readily available materials to build or fix mechanical problems. [2] The television show features Aboriginal (Warlpiri) people from Yuendumu, in the Northern Territory, fixing cars as they travel through Central Australia. As they traverse the desert in their dilapidated vehicles, the series follows how they solve multiple car problems with inventive, wacky and unpredictable bush repair techniques. The characters include Jack Jakamarra, an Aboriginal elder who introduces the episodes by recalling some of his first encounters with white people and their ways, and Jupurrula, the "magic mechanic" who seems to appear out of nowhere to help the Bush Mechanics when they're in real trouble. [3]

The television series was made after initial half-hour documentary, which garnered international recognition. [4] It consisted of four subsequent episodes, first broadcast by ABC Television (Australia) from 2 October 2001 [3] to December 2001. [5] The episodes were: [1]

The series is notable for being one of the first media to be in an Aboriginal Australian language, as much of the dialogue is in Warlpiri and Kriol. [6]

Episode One involved a station wagon with the band's equipment on the roof. Since the car was very old, the back half collapsed. They then removed the roof of the car with an axe, turned it upside down, and tied it to the back of the car, loaded the items from the roof onto the same roof and then used it as a trailer behind the car. They continued down the sandy track dragging the roof behind them.

Describe as one of the most original and popular television series produced in Australia, [7] and "iconic", [5] the series afterwards became a bestselling DVD. [7]

An exhibition based on the series was developed by the National Motor Museum (a museum of the History Trust of South Australia) and Pintubi Anmatjere Warlpiri (PAW) Media, in 2018. It was mounted at the Melbourne Museum from 9 March to 15 March 2018 before touring the country, [5] finishing at the National Museum of Australia from 6 December 2018 to 24 February 2019. [9] A book entitled Bush mechanics: from Yuendumu to the world, by Mandy Paul, was published in 2017 to accompany the exhibition. [10]

Michael den Elzen is a musician and music producer based in Melbourne, Australia. He has performed for over 30 years with many well-known Australian and New Zealand artists, principally as a guitarist, and has contributed music for several Australian movie soundtracks.

Dorothy Napangardi was a Warlpiri speaking contemporary Indigenous Australian artist born in the Tanami Desert and who worked in Alice Springs.

Yuendumu is a town in the Northern Territory of Australia,293 kilometres (182 mi) northwest of Alice Springs on the Tanami Road, within the Central Desert Region local government area. It ranks as one of the larger remote communities in central Australia, and has a thriving community of Aboriginal artists. It is home to Pintubi Anmatjere Warlpiri (PAW) Media, which produced the TV series Bush Mechanics.

Paddy Japaljarri Stewart was an Australian Aboriginal artist from Mungapunju, south of Yuendumu. He was chairman of the Warlukurlangu Artists Committee. Stewart was one of the artists who contributed to the Honey Ant Dreaming mural on the Papunya school wall in 1971 - the very genesis of the modern Aboriginal art movement.

The Coniston massacre, which took place in the region around the Coniston cattle station in the then Territory of Central Australia from 14 August to 18 October 1928, was the last known officially sanctioned massacre of Indigenous Australians and one of the last events of the Australian Frontier Wars. In a series of punitive expeditions led by Northern Territory Police constable William George Murray, people of the Warlpiri, Anmatyerre, and Kaytetye groups were killed. The massacre occurred in response to the murder of dingo hunter Frederick Brooks, killed by Aboriginal people in August 1928 at a place called Yukurru, also known as Brooks Soak. Official records at the time state that at least 31 people were killed, however analysis of existing documentation and Aboriginal oral histories reveal that the fatalities were likely to have been as high as 200.

A bush mechanic is somebody who out of necessity and with immediate available materials, is able to solve practical problems using sometimes untraditional and inventive techniques. Generally an inventive technique is required due to the lack of proper resources or the other constraints in solving the problem using traditional means. 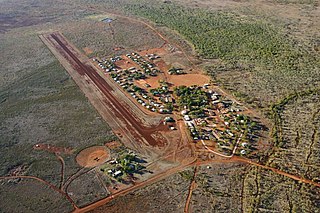 Lajamanu is a small town of the Northern Territory in Australia. It is located around 557 kilometres from Katherine and approximately 890 kilometres from Darwin. At the 2006 census, Lajamanu had a population of 669, of which 92 percent are of Aboriginal origin.

Paw may refer to:

Robert (Bobby) Mellor Granites Jabanungga AKA Robert Kantilla, Robert Japanangka, Robert Japananga, Robert Jabanunga Kantilla (1946–1985) was a TV actor, Aboriginal dancer and musician best known for playing the didgeridoo at many Canberra festivals as well as national and international events. Jabanungga Avenue in the Canberra suburb of Ngunnawal is named in his honour. The word Jabanungga is a skin name.

Bess Nungarrayi Price is an Aboriginal Australian activist and politician. She was a Country Liberal Party member of the Northern Territory Legislative Assembly from 2012 to 2016, representing the electorate of Stuart, and was Minister for Community Services in the Giles Ministry. She lives in Alice Springs in Central Australia, in the Northern Territory.

Daisy Jugadai Napaltjarri was a Pintupi-Luritja-speaking Indigenous artist from Australia's Western Desert region, and sister of artist Molly Jugadai Napaltjarri. Daisy Jugadai lived and painted at Haasts Bluff, Northern Territory. There she played a significant role in the establishment of Ikuntji Women's Centre, where many artists of the region have worked.

Peggy Rockman Napaljarri is a Warlpiri-speaking Indigenous artist from Australia's Western Desert region. Born on what is now Tanami Downs pastoral station in the Northern Territory, she learned English when working as a child with a white mining family; Peggy Rockman and her family were subsequently relocated by government authorities to Lajamanu, a new community west of Tennant Creek. Peggy Rockman is one of the traditional owners of Tanami Downs.

Nora Andy Napaltjarri is a Warlpiri- and Luritja-speaking Indigenous artist from Australia's Western Desert region. like her mother Entalura Nangala, Nora has painted for Indigenous artists' cooperative Papunya Tula. Her work has been exhibited at the Gauguin Museum in Tahiti, and is held by Artbank.

Norah Nelson Napaljarri is a Warlpiri-speaking Indigenous artist from Australia's Western Desert region. Norah Nelson began painting in 1986 and has exhibited her works both in Australia and other countries. Her paintings and pottery are held in the collection of the National Gallery of Victoria. 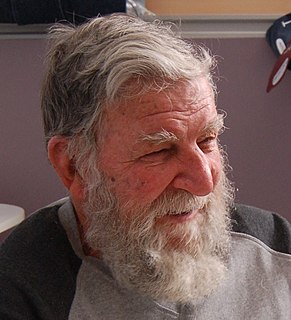 Richard “Dick” Glyn Kimber is an Australian historian and author who has written extensively on the history, art, culture and wildlife of Central Australia. He has published several books, the best known of which is Man From Arltunga: Walter Smith, Australian Bushman as well as more than 100 articles and essays. Kimber is also a Member of the Order of Australia.