One Night the Moon

One Night the Moon is a 2001 Australian musical non-feature film starring husband and wife team Paul Kelly, a singer-songwriter, and Kaarin Fairfax, a film and television actress, along with their daughter Memphis Kelly. [1] Directed by Rachel Perkins and written by Perkins with John Romeril, it was filmed on Andyamathanha land in the Flinders Ranges, South Australia for six weeks in early 2000. [1] [2] Kelton Pell portrayed an Aboriginal tracker, Albert Yang with Ruby Hunter playing his wife, who searches for the missing child. [3] Musical score was by Kelly, Kev Carmody and Mairead Hannan, and with other artists they also contributed to the soundtrack. [3] [4] The film won ten awards, including two Australian Film Institute (AFI) Awards. [5]

One Night the Moon was inspired by the story of indigenous tracker, Alexander Riley as depicted in Black Tracker (1997), a documentary directed by Riley's grandson, Michael Riley. [6] [7] Alexander Riley had worked for the New South Wales police in Dubbo in the early 1900s, finding wanted criminals, missing persons and hidden caches. [6] Composer/singer Mairead Hannan saw the documentary and formed a project with her sister Deirdre Hannan, Kelly, Carmody, Alice Garner, Romeril and Perkins. [7] Aside from the search for a missing child, the film deals with the racist attitude depicted by the father's refusal to use an indigenous tracker. [2] [7] The film was Paul Kelly's cinematic debut, while his then wife, Fairfax had a lead role in two related TV mini-series Harp in the South and Poor Man's Orange in 1987, and roles in films Belinda (1988) and Young Einstein (1989). [8] Fairfax had her film debut with a minor role in 1982's Starstruck which had Paul Kelly and the Dots supplying a song for the soundtrack. [9] [10]

Set in the 1930s Australian Outback, starring singer Paul Kelly as a farmer, Jim Ryan, newly settled in the area. He is the father of a girl, Emily (Memphis Kelly, his real life daughter), who climbs out the window of their farmhouse one night and follows the moon into the hills. Rose Ryan (Kelly's then wife Kaarin Fairfax and mother of Memphis) comes to check on her daughter only to find that Emily is missing.

The Ryans get the local police, led by a sergeant (Chris Haywood), to search for her, but when their Aboriginal tracker, Albert Yang (Kelton Pell) arrives, the father says he does not want any blacks on his land. Jim Ryan and the white police go searching for Emily, destroying evidence Albert could have used to find the girl. The white men cannot find her, eventually Rose goes to Albert's hut and together they go looking for Emily, they find her dead in the hills and bring her body back home. Jim blames himself for not finding Emily and commits suicide. Albert's wife (Ruby Hunter) sings the funeral song for the lost child.

A 1997 documentary, Black Tracker on Australian Broadcasting Corporation (ABC) TV, concerned an indigenous tracker called Alexander Riley from Dubbo, New South Wales. [6] [7] Singer-songwriter Mairead Hannan saw Black Tracker, she liked the story about a young boy who disappeared near Dubbo in 1932 and was tracked by Riley. [7] Hannan wanted to tell the story as a musical for a project sponsored by ABC TV's Arts and Entertainment department. [7] Mairead enlisted her sister and fellow composer Deirdre Hannan, then other composers/performers Paul Kelly, Kev Carmody and Alice Garner to help with the project. [1] Screenwriter John Romeril and director Rachel Perkins were approached and together wrote the screenplay. [1] Garner was due to take the part of Rose Ryan, the mother, but became pregnant so Kaarin Fairfax (Kelly's wife) undertook the role. [1] Aside from the search for a missing child, the film deals with the racist attitude depicted by the father's refusal to use the indigenous tracker. [2] [7] The original story was about the tracker seeking a young boy who had gone missing, but Perkins decided a missing girl would have greater impact and also shifted the focus to the despairing mother. [7] Fairfax and Kelly volunteered their seven-year-old daughter, Memphis Kelly, for the part of the lost child. [1] Location filming occurred on Adnyamathanha land in the Flinders Ranges and other sites in South Australia for six weeks early in 2000. [1] [2] Kelton Pell portrayed the indigenous tracker, Albert with Ruby Hunter playing his wife. [3] Musical score was by Kelly, Kev Carmody and Mairead Hannan, and with other artists they also contributed to the soundtrack. [3] [4] [7]

Awards and nominations received by One Night the Moon. [5]

One Night the Moon: Original Soundtrack

Paul Maurice Kelly is an Australian rock music singer-songwriter and guitarist. He has performed solo, and has led numerous groups, including the Dots, the Coloured Girls, and the Messengers. He has worked with other artists and groups, including associated projects Professor Ratbaggy and Stardust Five. Kelly's music style has ranged from bluegrass to studio-oriented dub reggae, but his core output straddles folk, rock, and country. His lyrics capture the vastness of the culture and landscape of Australia by chronicling life about him for over 30 years. David Fricke from Rolling Stone calls Kelly "one of the finest songwriters I have ever heard, Australian or otherwise." Kelly has said, "Song writing is mysterious to me. I still feel like a total beginner. I don't feel like I have got it nailed yet".

Sara Bettine Storer is an Australian country music singer-songwriter and former teacher. She won a record breaking seven Golden Guitar awards in the Tamworth Country Music Festival in January 2004, and as of 2017, she has won 21 in total. Three of her six studio albums have reached the top 30 on the ARIA Albums Chart, Firefly, Lovegrass and Silos. Silos also won Best Country Album at the ARIA Music Awards of 2016. Storer has been a member of a country music trio, Songbirds (2007–09) alongside Beccy Cole and Gina Jeffries. Her older brother, Greg Storer, is also a country music singer-songwriter and the siblings have recorded and performed together.

Hidden Things is an album by Australian folk rock group Paul Kelly & the Messengers released in March 1992 on Mushroom Records, which reached No. 29 on the ARIA Albums Chart. It also reached the Top 40 on the New Zealand Albums Chart. It is a collection of tracks recorded by Kelly and both his backing bands, the Coloured Girls and the Messengers, from 1986 to 1991, but were not issued on previous studio albums. The album spawned a single, "When I First Met Your Ma", which was issued in April. Messenger band members provide lead vocals on "Hard Times" from its writer Steve Connolly, "Rock 'n' Soul" from its writer Jon Schofield. "Sweet Guy Waltz" is a slower version of "Sweet Guy" which was on 1989's So Much Water So Close to Home. The album was re-released in 2011 as Hidden Things: B-sides & Rarities.

Archibald William Roach is an Aboriginal Australian musician. He is a singer, songwriter, guitarist, and a campaigner for the rights of Indigenous Australians.

Kaarin Louise Fairfax is an Australian actress, director and singer who played the role of 'Dolour Darcy' in two TV miniseries The Harp in the South (1986) and its sequel Poor Man's Orange (1987) based on books of the same names by Ruth Park. She has also acted in other Australian television series throughout the 1980s, 1990s and 2000s, and recorded music under the name of Mary-Jo Starr. Fairfax had the role of 'Deb Mathieson' on Australian Broadcasting Corporation TV series, Bed of Roses. 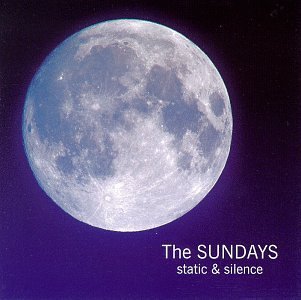 Static & Silence is the third and final studio album by English alternative rock band The Sundays, released in the UK by Parlophone on 22 September 1997, and in the US by Geffen on 23 September 1997. The title is a quote from the album's final track "Monochrome", and the album's cover photo is a reference to the subject of "Monochrome", the TV screening of the Apollo 11 moon landing.

"From Little Things Big Things Grow" is a protest song recorded by Australian artists Paul Kelly & The Messengers on their 1991 album Comedy, and by Kev Carmody on his 1993 album Bloodlines. It was released as a CD single by Carmody and Kelly in 1993 but failed to chart. The song was co-written by Kelly and Carmody, and is based on the story of the Gurindji strike and Vincent Lingiari as part of the Indigenous people's struggle for land rights in Australia and reconciliation. 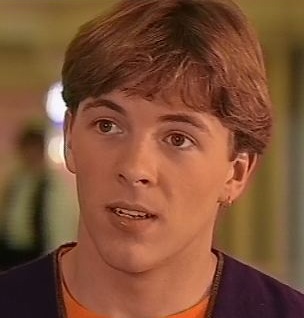 Shane Parrish is a fictional character from the Australian soap opera Home and Away, played by Dieter Brummer. He made his first on-screen appearance on 28 May 1992 and he departed on 13 March 1996.

The 23rd Annual Australian Recording Industry Association Music Awards took place on 26 November 2009 at the Acer Arena at the Sydney Olympic Park complex. The ceremony was telecast on the Nine Network at 8:30pm that night. The nominees for all categories were announced on 8 October, with the winners of the Fine Arts Awards and Artisan Awards announced on 10 November. Biggest winners for the year were Empire of the Sun which collected a total of seven awards. 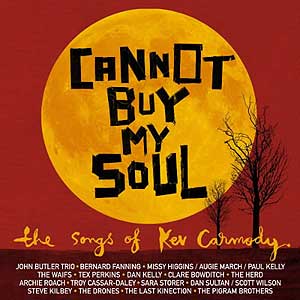 Cannot Buy My Soul: The Songs of Kev Carmody, or more simply Cannot Buy My Soul, is a 2007 double-CD compilation tribute album featuring various artists performing tracks by Australian singer-songwriter Kev Carmody. They were brought together by rock musician, Paul Kelly, who also performs on a track. Artists include Dan Kelly, the John Butler Trio, the Waifs and Clare Bowditch.

Death's Dateless Night is the 22nd studio album by Paul Kelly and is a collaboration with fellow Australian musician, Charlie Owen, which was issued via Gawd Aggie/Universal Music Australia on 7 October 2016. It was co-produced by Kelly, Owen and J. Walker, which peaked at No. 16 on the ARIA Albums Chart. It was nominated for Best Blues and Roots Album at the ARIA Music Awards of 2017.

Our Home, Our Land is a compilation album released in Australia by CAAMA in 1995. It was released to celebrate the victory in the Mabo case. It focused on the importance of land to the Aboriginal and Torres Strait Islander beliefs. It was nominated for a 1996 ARIA Award for Best Indigenous Release.