A LAN Messenger is a instant messaging program for computers designed for use within a single local area network (LAN). 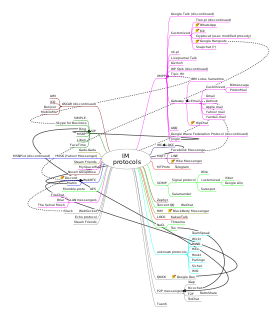 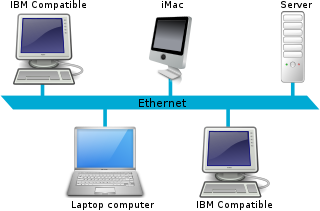 Many LAN Messengers offer basics functionality for sending private messages, file transfer, chatrooms and graphical smileys. The advantage of using a simple LAN messenger over a normal instant messenger is that no active Internet connection or central server is required, and only people inside the firewall will have access to the system. 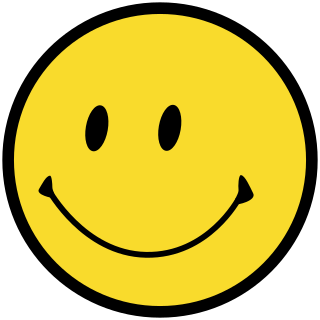 A smiley is a stylized representation of a smiling humanoid face that is a part of popular culture worldwide. The classic form designed by Harvey Ball in 1963 comprises a yellow circle with two black dots representing eyes and a black arc representing the mouth On the Internet and in other plain text communication channels, the emoticon form has traditionally been most popular, typically employing a colon and a right parenthesis to form sequences such as :-), :), =), or (: that resemble a smiling face when viewed after rotation through 90 degrees. "Smiley" is also sometimes used as a generic term for any emoticon The smiley has been referenced in nearly all areas of Western culture including music, movies, and art. The smiley has also been associated with late 1980s and early 1990s rave culture. 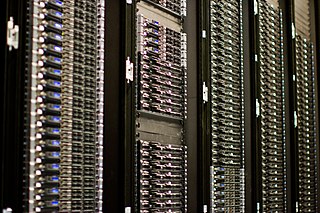 A precursor of LAN Messengers is the Unix talk command, and similar facilities on earlier systems, [1] which enabled multiple users on one host system to directly talk with each other. 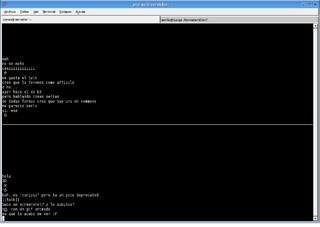 talk is a Unix text chat program, originally allowing messaging only between the users logged on to one multi-user computer—but later extended to allow chat to users on other systems.

On Windows, WinPopup was a small utility included with Windows 3.11. WinPopup uses SMB/NetBIOS protocol and was intended to receive and send short text messages.

In computer networking, Server Message Block (SMB), one version of which was also known as Common Internet File System, is a network communication protocol for providing shared access to files, printers, and serial ports between nodes on a network. It also provides an authenticated inter-process communication mechanism. Most usage of SMB involves computers running Microsoft Windows, where it was known as "Microsoft Windows Network" before the introduction of Active Directory. Corresponding Windows services are LAN Manager Server for the server component, and LAN Manager Workstation for the client component.

NetBIOS is an acronym for Network Basic Input/Output System. It provides services related to the session layer of the OSI model allowing applications on separate computers to communicate over a local area network. As strictly an API, NetBIOS is not a networking protocol. Older operating systems ran NetBIOS over IEEE 802.2 and IPX/SPX using the NetBIOS Frames (NBF) and NetBIOS over IPX/SPX (NBX) protocols, respectively. In modern networks, NetBIOS normally runs over TCP/IP via the NetBIOS over TCP/IP (NBT) protocol. This results in each computer in the network having both an IP address and a NetBIOS name corresponding to a host name.

Windows NT/2000/XP improves upon this with Windows Messenger service, a Windows service compatible to WinPopup. [2] On systems where this service is running, the received messages "pop up" as simple message boxes. Any software compatible with WinPopup, like the console utility NET SEND, can send such messages. However, due to security concerns, [3] by default, the messenger service is off in Windows XP SP2 and blocked by Windows XP's firewall.

ICQ is a cross-platform instant messaging and VoIP client. The name ICQ derives from the English phrase "I Seek You". Originally developed by the Israeli company Mirabilis in 1996, the client was bought by AOL in 1998, and then by Mail.Ru Group in 2010.

Pidgin is a free and open-source multi-platform instant messaging client, based on a library named libpurple that has support for many instant messaging protocols, allowing the user to simultaneously log into various services from one application.

Kopete is a multi-protocol, free software instant messaging client released as part of the KDE Software Compilation. Although it can run in numerous environments, it was designed for and integrates with the KDE Plasma Workspaces. Kopete was started because ICQ blocked Licq from their network in 2001. According to the original author, Duncan Mac-Vicar Prett, the name comes from the Chilean Spanish word copete, meaning "a drink with your friends". Kopete has been nominated for multiple awards. The designated successor is KDE Telepathy from the KDE RTCC Initiative.

Adium is a free and open source instant messaging client for macOS that supports multiple IM networks, including Windows Live Messenger, Yahoo! Messenger, Google Talk, AIM, ICQ and XMPP. It is written using macOS's Cocoa API, and it is released under the GNU General Public License and many other licenses for components that are distributed with Adium.

NetBIOS Frames or NBF protocol is a non-routable network- and transport-level data protocol most commonly used as one of the layers of Microsoft Windows networking in the 1990s. NBF protocol or NetBIOS over IEEE 802.2 LLC is used by a number of network operating systems released in the 1990s, such as LAN Manager, LAN Server, Windows for Workgroups, Windows 95 and Windows NT. Other protocols, such as NBT, and NetBIOS-over-IPX/SPX also implement the NetBIOS/NetBEUI services over other protocol suites.

Windows Chat is a simple LAN-based text chatting program included in Windows for Workgroups and, later, the Windows NT-line of operating systems, including Windows NT 3.x, 4.0, Windows 2000, Windows XP and Windows Server 2003. In later Windows versions, the Network DDE service may need to be enabled to receive calls. It utilizes the NetBIOS session service and NetDDE. Users can chat with each other over an IPX LAN. The shortcut to the executable is not present in the Start Menu in newer versions of Windows; it must instead be run by using Start > Run... > WinChat.exe.

A Mailslot is a one-way interprocess communication mechanism, available on the Microsoft Windows operating system, that allows communication between processes both locally and over a network. The use of Mailslots is generally simpler than named pipes or sockets when a relatively small number of relatively short messages are expected to be transmitted, such as for example infrequent state-change messages, or as part of a peer-discovery protocol. The Mailslot mechanism allows for short message broadcasts ("datagrams") to all listening computers across a given network domain.

The following tables compare general and technical information for a number of LAN messengers.

MSN Messenger, later rebranded as Windows Live Messenger, is a discontinued cross-platform instant messaging client developed by Microsoft. It connected to the Microsoft Messenger service while also having compatibility with Yahoo! Messenger and Facebook Messenger. The client was first released as MSN Messenger Service on July 22, 1999, and was marketed under the MSN branding until 2005 when it was rebranded under Windows Live and has since been officially known by its present name, although its previous name was still used colloquially by most of its users. In June 2009, Microsoft reported the service attracted over 330 million active users each month, placing Messenger among the most widely used instant messaging clients in the world.

QIP is a multiprotocol instant messaging client. It is a closed source freeware program originally developed by Ilgam Zyulkorneev. In 2008 it was bought by RosBusinessConsulting media group and named most popular RBC service in 2009.

Eyeball Chat is a proprietary freeware VoIP, video telephony soft phone with multiple-protocol instant messaging for Windows PCs, developed by Chris Piche and Eyeball Networks in Vancouver, and first released in 2000. The software is free for personal use.